When it comes to reading historical fiction one of my favorite periods is ancient history so I was very happy when offered the opportunity to review Realm by Alexandrea Weis. I thank TLC Book Tours for sending me a copy at no charge for my honest review. 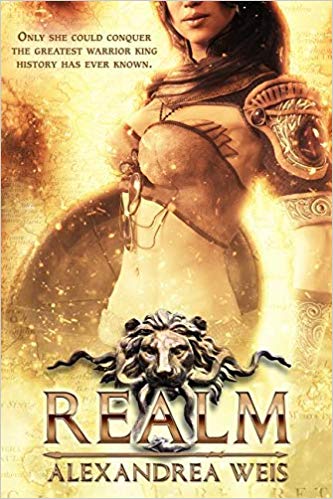 When her homeland is conquered by the mighty Alexander the Great, Roxana—the daughter of a mere chieftain—is torn from her simple life and thrown into a world of war and intrigue.

Terrified, the sixteen-year-old girl of renowned beauty is brought before the greatest ruler the world has ever known. Her life is in his hands; her future his to decide.

Without formal education or noble blood, Roxana is chosen by the Greek conqueror to be his bride. Soon she comes to know profound happiness and unyielding desire in her warrior’s arms.

However, being the king’s consort comes at a heavy price. To survive her husband’s treacherous kingdom, she must endure continuous warfare, deadly plots, jealous rivals, victory-hungry generals, and the stigma of being a barbarian. Persian blood will keep her from claiming the grandest title of all—queen—but her reign will seal the fate of an empire.

History tells his story. This is hers.

Alexandrea Weis, RN-CS, CRRN, ONC, PhD, is a multi award-winning author of twenty-five novels, a screenwriter, ICU Nurse, and historian who was born and raised in the French Quarter of New Orleans. Having grown up in the motion picture industry as the daughter of a director, she learned to tell stories from a different perspective and began writing at the age of eight. Infusing the rich tapestry of her hometown into her novels, she believes that creating vivid characters makes a story moving and memorable. A permitted/certified wildlife rehabber with the Louisiana Wildlife and Fisheries, Weis rescues orphaned and injured animals. She lives with her husband and pets in New Orleans. Weis writes paranormal, suspense, thrillers, horror, crime fiction, and romance.

Anyone who has studied history has heard of Alexander the Great. He is remembered as one of the great conquerors – whether that is good or bad I suppose depends on how you look at conquerors. They are remembered, that is for sure. But what about the women in their lives? Some of them are remembered but the further we go back in time the less is known and the more is forgotten.

Roxana is a daughter of chief who is under attack by Alexander and his troops. After winning the battle Alexander hosts a feast where Roxana and her sisters are called in to dance to entertain the Conqueror and his generals. Her father tells her to dance her best because he knows that word of her intelligence and beauty has filtered back to the great man. Little does Roxana know that the course of her life is about to change.

Roxana and Alexander marry and despite some trepidation from his Greek army that he is marrying a Persian woman of little standing she soon wins them over with her wit, caring and wisdom. She and Alexander turn out to be a love match despite their rocky beginnings and she follows him as he continues on his endless efforts to conquer more of the world than his father did. But if you remember your history Alexander died very young so where did that leave Roxana? You will have to read this rather compelling book to find out.

I do enjoy ancient history and respect an author who can take the tiny bits left and create a good story. It only makes sense that the farther back we go in time the less will be available for researchers. Particularly when it comes to trying to tell the stories of the women associated with the men who loom so large in the historical record. Ms. Weis truly brings Roxana alive as she goes from spoiled and pampered daughter to confident consort to grieving widow and beyond. Alexander looms large in this tale, as he would but this is Roxana’s story and most of what happens is told through how it impacts her or how she views it. Battles, marches, war, death and politics all swirl but Alexander remains as Roxana’s center until he dies. She is truly an interesting woman who has been lost to history and this book bring her back to vivid life.

A Giveaway of Realm:

One lucky US reader will win a copy of Realm. Just enter as many ways as you would like on the Gleam widget below. Good luck everyone.