Remember Me by Mario Escobar – Blog Tour and Book Review

I am a huge fan of historical fiction from Europe but I will admit to a huge lack in my knowledge of the history of Spain much past the Renaissance. I thank TLC Book Tours for sending me a copy of Remember Me by Mario Escobar at no charge for my honest review. 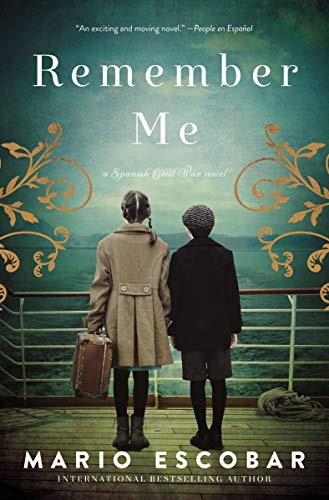 Amid the shadows of war, one family faces an impossible choice that will change their lives forever.

Madrid, 1934. Though the Spanish Civil War has not yet begun, the streets of Madrid have become dangerous for thirteen-year-old Marco Alcalde and his younger sisters, Isabel and Ana. When Marco’s parents align themselves against General Franco and his fascist regime, they have no inkling that their ideals will endanger them and everyone they love—nor do they predict the violence that is to come.

When the Mexican government promises protection to the imperiled children of Spain, the Alcaldes do what they believe is best: send their children, unaccompanied, across the ocean to the city of Morelia—a place they’ve never seen or imagined. Marco promises to look after his sisters in Mexico until their family can be reunited in Spain, but what ensues is a harrowing journey and a series of heartbreaking events. As the growing children work to care for themselves and each other, they feel their sense of home, family, and identity slipping further and further away. And as their memories of Spain fade and the news from abroad grows more grim, they begin to wonder if they will ever see their parents again or the glittering streets of the home they once loved.

Based upon the true stories of the Children of Morelia, Mario Escobar’s Remember Me—now available for the first time in English—explores the agony of war and paints a poignant portrait of one family’s sacrificial love and endurance

Mario Escobar has a master’s degree in modern history and has written numerous books and articles that delve into the depths of church history, the struggle of sectarian groups, and the discovery and colonization of the Americas. Escobar, who makes his home in Madrid, Spain, is passionate about history and its mysteries.

This is a very emotional book. As I keep saying I’m not going to take any more WWII books – although this is separate from and only at the very beginning of the war – I still keep taking them. The stories told from the time period are so strong and so very involving. But these books devastate me.  Hopefully this will be the last one, but knowing myself I doubt it.

War as we all know is hell and civil war is a special level of hell. The war hasn’t quite started but the people are starting to choose sides and the rhetoric is flying fast and furious (hmmm.) Remember Me shares the story of the fictional Alcade family. They live in Madrid and when the parents fall on the side against Franco it’s no longer safe for the children. Fortunately Mexico has offered to take in the children of Spain to keep them safe until the war is over. The Alcades make the impossible decision to send their three young children to the city of Morelia where they can live until until the war ends. But it is not as simple as it seems.

What follows is a harrowing tale of three children going on a trip to Mexico without their parents to a place they don’t know. It’s assumed it will be a better place but thanks to corruption the children enter a world of barely enough after coming from a world of comfort.

This is not an easy book to read but what book about family separation is? Parents make hard decisions assuming they are the best for their children. Promises are made but not kept. After many years in Mexico the children are not Mexican nor are they really Spanish any more. They try to keep in touch with their parents but correspondence during the war is slow and uneven. Return trips to Spain after the war for answers only lead to heartbreak.

This is a very powerful book. It was written originally in Spanish but the translation is smooth as silk, I never would have known it was not written in English. The descriptions of war are as horrible as you would expect but the relationships are beautifully drawn. I am glad I read for all the emotions it caused.