by
Patty
-
Share
Tweet
Yum
Share
Pin
Email
I was happy to accept a copy of The Midwife’s Confession by Diane Chamberlain from the publisher at no charge for my honest review. 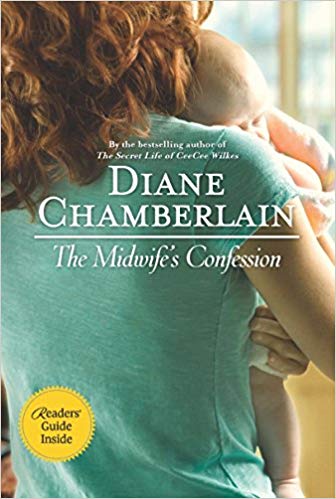 About The Midwife’s Confession:

Dear Anna,
What I have to tell you is difficult to write, but I know it will be far more difficult for you to hear, and I’m so sorry…

The unfinished letter is the only clue Tara and Emerson have to the reason behind their close friend Noelle’s suicide. Everything they knew about Noelle—her calling as a midwife, her passion for causes, her love for her friends and family—described a woman who embraced life.

Yet there was so much they didn’t know.

With the discovery of the letter and its heartbreaking secret, Noelle’s friends begin to uncover the truth about this complex woman who touched each of their lives—and the life of a desperate stranger—with love and betrayal, compassion and deceit.Diane Chamberlain is the bestselling author of 18 novels. Her books, frequently set in the southeastern United States, are complex stories about love, compassion and forgiveness with a touch of mystery and suspense.

Diane was born and raised in Plainfield, New Jersey, and attended Glassboro State University. She also lived for many years in both San Diego and northern Virginia. Diane received her master’s degree in clinical social work from San Diego State University. Prior to her writing career, she was a hospital social worker and a psychotherapist in private practice, working primarily with adolescents. Diane’s background in psychology and her work in hospitals have given her a keen interest in understanding the way people tick, as well as the background necessary to create real, living, breathing characters.

More than a decade ago, Diane was diagnosed with rheumatoid arthritis, which changed the way she works: she sometimes types using voice-recognition software. She feels fortunate that her arthritis is not more severe and that she is able to enjoy everyday activities as well as keep up with a busy work and travel schedule.

Diane has three married stepdaughters, three grandchildren and two shelties. She lives with photographer John Pagliuca in North Carolina where she’s at work on her next novel.

This book starts by introducing us to the three main characters: Noelle, Tara and Emerson. They met in college and have been best friends since that time. Tara and Emerson both have daughters the same age. Noelle is older than her two friends and is childless.  Noelle is a midwife like her mother before her – it’s her passion. The story is told chapter by chapter; each in the voice of one of the women. Some in flashback some in the present. As the story unfolds other women come into the mix but this is, at its heart, the tale of these three women. Early in Noelle commits suicide and her friends are devastated. They have absolutely no idea why she would take her own life. As far as they knew she was happy.

Emerson packs up Noelle’s belongings for donation but she keeps her letters hoping to find some inkling as to why she did what she did.  What she finds shakes up all of their lives.

This was a very enthralling book. As Emerson delves into Noelle’s past she and Tara find that they did not know her as well as they thought they did. She was keeping a lot of secrets. As Emerson deals with what she is learning, Tara is trying to recover from the sudden death of her husband. A husband she trusted but she soon finds out that he knew more about Noelle than she did. As they get closer to the reason Noelle killed herself some of the plot points were a bit stretched but the overall tale is one of love, lies, loss and redemption. Very strong themes woven together into a tapestry showing the bonds of family and friendship.

I found myself racing towards the end, not wanting to put the book down. It was like I was holding my breath and then finally I could exhale. Ms. Chamberlain writes very strong women with very real problems and lives.