#Review and #Rafflecopter #Giveaway: Song of the Nile by Stephanie Dray 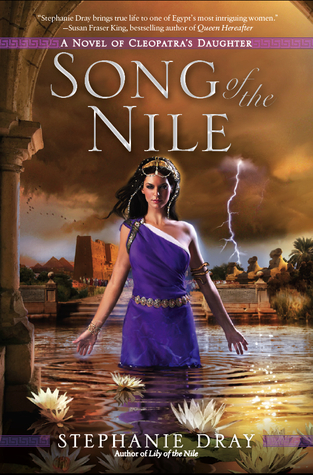 
Sorceress. Seductress. Schemer. Cleopatra’s daughter has become the emperor’s most unlikely apprentice and the one woman who can destroy his empire…

Having survived her perilous childhood as a royal captive of Rome, Selene pledged her loyalty to Augustus and swore she would become his very own Cleopatra. Now the young queen faces an uncertain destiny in a foreign land.

Forced to marry a man of the emperor’s choosing, Selene will not allow her new husband to rule in her name. She quickly establishes herself as a capable leader in her own right and as a religious icon. Beginning the hard work of building a new nation, she wins the love of her new subjects and makes herself vital to Rome by bringing forth bountiful harvests.

But it’s the magic of Isis flowing through her veins that makes her indispensable to the emperor. Against a backdrop of imperial politics and religious persecution, Cleopatra’s daughter beguiles her way to the very precipice of power. She has never forgotten her birthright, but will the price of her mother’s throne be more than she’s willing to pay?


Stephanie Dray writes historical fiction and fantasy. Using the transformative power of magic realism, she illuminates the stories of women in history so as to inspire the young women of today. She remains fascinated by all things Egyptian and has–to the consternation of her devoted husband–collected a house full of cats and ancient artifacts.


This is the second book in a trilogy on the life of Cleopatra’s daughter, Cleopatra Selene from the very talented pen of Stephanie Dray. My review of the first book, Lily of the Nile left me enthralled and wanting more. And now more I have been given. In this part of Selene’s life we find her a Queen and married to Juba, another of Augustus’ hostages. They are sent back to Juba’s homeland to rule on behalf of and quite beholden to Rome.


Juba and Selene are well developed characters and I especially love Selene. She has been through such horror and lost so much. Augustus plays at being the benevolent “father” but he is just a controlling tyrant. Yes, he has made her a Queen but he is actively trying to kill her twin, Helios and her younger brother Philadelphus is being kept in Rome as a hostage for her good behavior.


She and Juba are tasked with making their new land produce to feed Rome. But Selene has one goal in life and that is to return to Egypt and reclaim her mother’s throne. She also has the magic of the goddess Isis flowing through her.


This book is a mixture of historical record, fantasy and fiction all rolled into one enthralling read. Just like the first installment I had a hard time putting it down.  Ms. Dray manages to weave the fantastical with the mortal in a very believable way. As you read you find yourself immersed in time and place and almost surprised to look up and see modern life. She writes so that you want to rant at or slap the face of a character and any book that brings out that kind of passion is a book for me! I am thoroughly enjoying my travels with Selene and her goddess. I am anxiously looking forward to the final installment in her trilogy.

One lucky reader will get to win a copy of Song of the Nile.
How do you win? It’s easy!
Just jump on the Rafflecopter!

Disclosure:  I received an e-copy of Song of the Nile gratis from the author. Any opinions expressed are my honest opinions and were not impacted by my receipt of the free book. I received no monetary compensation for this post.