I have read individual books by all of the authors of Ribbons of Scarlet. I have read books where some configuration of these authors have collaborated on a book or two. Therefore I was thrilled when TLC Book Tours offered to send me a copy at no charge for my honest review. 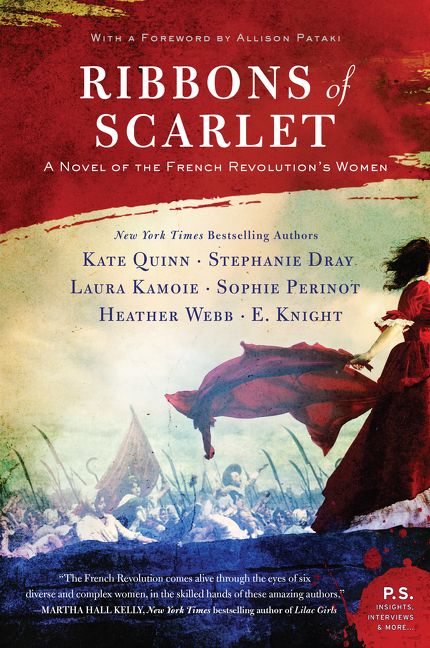 About Ribbons of Scarlet:

“The French Revolution comes alive through the eyes of six diverse and complex women, in the skilled hands of these amazing authors.”–Martha Hall Kelly, New York Times bestselling author of Lilac Girls

A breathtaking, epic novel illuminating the hopes, desires, and destinies of princesses and peasants, harlots and wives, fanatics and philosophers—seven unforgettable women whose paths cross during one of the most tumultuous and transformative events in history: the French Revolution.

Ribbons of Scarlet is a timely story of the power of women to start a revolution—and change the world.

In late eighteenth-century France, women do not have a place in politics. But as the tide of revolution rises, women from gilded salons to the streets of Paris decide otherwise—upending a world order that has long oppressed them.

Blue-blooded Sophie de Grouchy believes in democracy, education, and equal rights for women, and marries the only man in Paris who agrees. Emboldened to fight the injustices of King Louis XVI, Sophie aims to prove that an educated populace can govern itself–but one of her students, fruit-seller Louise Audu, is hungrier for bread and vengeance than learning. When the Bastille falls and Louise leads a women’s march to Versailles, the monarchy is forced to bend, but not without a fight. The king’s pious sister Princess Elisabeth takes a stand to defend her brother, spirit her family to safety, and restore the old order, even at the risk of her head.

But when fanatics use the newspapers to twist the revolution’s ideals into a new tyranny, even the women who toppled the monarchy are threatened by the guillotine. Putting her faith in the pen, brilliant political wife Manon Roland tries to write a way out of France’s blood-soaked Reign of Terror while pike-bearing Pauline Leon and steely Charlotte Corday embrace violence as the only way to save the nation. With justice corrupted by revenge, all the women must make impossible choices to survive–unless unlikely heroine and courtesan’s daughter Emilie de Sainte-Amaranthe can sway the man who controls France’s fate: the fearsome Robespierre.

Ribbons of Scarlet can be purchased at Harper Collins

Kate Quinn is a New York Times and USA Today bestselling author of historical fiction, including “The Huntress” and “The Alice Network.” A native of southern California, she attended Boston University where she earned a Bachelor’s and Master’s degree in Classical Voice. Kate and her husband now live in San Diego with two rescue dogs. (The Huntress, A Year of Ravens)

Stephanie Dray is a NYT, WSJ, & USA Today bestselling author of historical women’s fiction. Her award-winning work tops lists for the most anticipated reads of the year. She lives near the nation’s capital with her husband, cats, and history books. (Lily of the Nile, Song of the Nile, Daughters of the Nile, America’s First Daughter, My Dear Hamilton, A Year of Ravens)

Laura Kamoie is the NYT, WSJ, & USA Today bestselling author of historical fiction. She holds a Ph.D. in early American history, is a published non-fiction author, and worked as Assoc. Professor of History at the U.S. Naval Academy before writing fiction full-time. Laura lives in Annapolis, MD, with her husband and daughters. (America’s First Daughter, My Dear Hamilton)

Sophie Perinot is an award-winning author of female-centered historical fiction. With two previous books set in France–during the 13th & 16th centuries–Sophie’s passion for French history began more than thirty years ago when she first explored the storied châteaux of the Loire Valley. She lives in the Washington DC metropolitan area. (The Sister Queens, Medicis Daughter)

Heather Webb is the international bestselling author of historical fiction set in France. To date, her award-winning books have sold in over a dozen countries worldwide. Heather lives in historic New England with her family and one feisty rabbit. (Becoming Josephine, Rodin’s Lover)

E. Knight is an award-winning, USA Today bestselling author of historical fiction. Her love of history began as a young girl when she traipsed the halls of Versailles. She’s known for riveting tales that cross the landscapes of Europe. Eliza lives in Maryland, with a knight, three princesses, and two naughty newfies. (A Year of Ravens, Prisoner of the Queen)

the French Revolution brings to mind many things but probably most of all the guillotine. It was a time of terror and death brought on by system of a rich ruling elite existing in somewhat of a vacuum regarding the conditions of the poor. Voices of change rose and soon that change was being implemented but not quite in an orderly way, nor in a way that was fair or equitable to any of the classes. Fear, rumor, hate and divisiveness became the new normal. Most of the names we remember from this time are those of men; Robespierre, Marat, Louis XVI. But there were many strong women who also played large roles in the destruction of the monarchy and the rise of the Republic.

Ribbons of Scarlet tells the story of the Revolution through the voices of 6 of these women. They come from all levels of French society from a fruit seller barely able to find enough to feed herself to the sister of the King. This assures that both sides of the story are told.

The book is broken into sections for each woman; The Philospher, The Revolutionary, The Princess, The Politician, The Assassin and The Beauty. Each section tells the tale of of the woman and advances the story. It is all done very fluidly and if one didn’t know there were 6 authors one would not be able to tell. Everything just flows from the retelling of the history to the integration of the women’s stories.

I must admit I was surprised to learn of all of these strong and intelligent women who were fighting so hard for human rights at this point in history. Oftentimes women’s stories are lost to history, particularly in times of war. Or their stories are perverted to suit the winner’s version for as we all know history is written by the victor. We now know that Marie Antoinette was not as awful as she was purported to be.

I was enthralled from the first pages of this novel. It’s a period of history I know fairly well for it’s one I’ve studied in college and have read about quite a bit since. To learn so much new in one book was a delight. The recent trend for books to focus on women in history has been an utter delight for this reader of historical fiction. I hope it continues for it brings to light the impact that simple women working together can have on history. Yes, I know that the King’s sister can hardly be considered “simple” but many woman who cause great change are often ignored for the actions of men. It’s enlightening to return to a familiar time and see it again through female eyes who helped shaped it – for better or worse.