A Ring of Truth: A Henrietta and Inspector Howard Novel by Michelle Cox – Book Review

I don’t tend to like murder mysteries as they keep me up at night but every now and then one intrigues me and I decide it might be worth the loss of sleep. A Ring of Truth by Michelle Cox was sent to me at no charge for my honest review. 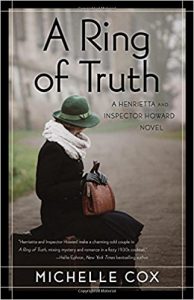 In this second book of the series, Henrietta and Clive delightfully rewrite Pride and Prejudice―with a hint of mystery!

Newly engaged, Clive and Henrietta now begin the difficult task of meeting each other’s family. “Difficult” because Clive has neglected to tell Henrietta that he is in fact the heir to the Howard estate and fortune, and Henrietta has just discovered that her mother has been hiding secrets about her past as well. When Clive brings Henrietta to the family estate to meet his parents, they are less than enthused about his impoverished intended. Left alone in this extravagant new world when Clive returns to the city, Henrietta finds herself more at home with the servants than his family, much to the disapproval of Mrs. Howard―and soon gets caught up in the disappearance of an elderly servant’s ring, not realizing that in doing so she has become part of a bigger, darker plot.

As Clive and Henrietta attempt to discover the truth in the two very different worlds unraveling around them, they both begin to wonder: Are they meant for each other after all?

You can now read my review of the third book in the series, A Promise Given

Michelle Cox holds a BA in English literature from Mundelein College, Chicago, and is the author of the award-winning A Girl Like You, the first in the Henrietta and Inspector Howard series. She is known for her wildly popular blog, How to Get Your Book Published in 7,000 Easy Steps – A Practical Guide, as well as her charming Novel Notes of Local Lore, a blog dedicated to Chicago’s forgotten residents. Cox lives with her husband and three children in the suburbs of Chicago.

In this book Inspector Clive Howard , who is really wealthy and of the Chicago “nobility” for lack of a better word is bringing Henrietta home to meet the parents. He did not tell her of the family’s wealth nor did he tell his parents about Henrietta. He had been married before he went off to the war but his first wife and their child died and he has not found anyone he cared about since – until Henrietta. His mother is less than impressed to say the least and sees her as slightly above the help.

Henrietta is a bit of a fish out of water at Clive’s ancestral home and she is now not very welcome at her own home because her mother has been keeping some secrets and is really against her marriage into the hoi polloi. But Henrietta really loves Clive. As Clive heads back to work at the police station he leaves Henrietta with his mother so they can get to know one another but she uses the time to teach Henrietta all she needs to know to be Clive’s wife – in a less than motherly manner. While this is going on a problem breaks out at home that forces Henrietta to have to leave to help her family.

There are some other subplots subtly woven in to the story bringing in pieces from the first book and setting up the next book. I really felt no lack for not having read the first book – this one stood alone just fine. Henrietta and Clive are well drawn, complete characters and I really liked them even when they had their moments of stubbornness and behaving unkindly towards each other. The ancillary characters are also well developed and they all contribute to the story in one way or another. There were some twists and some smiles and all in all this was a book I truly enjoyed.