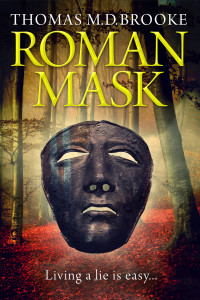 Augustus Caesar rules Imperial Rome at the height of its power, as the Roman Empire stretches across the known world. Cassius, son of one of her most powerful families, is the personification of Rome’s imperial strength: wealthy, popular, a war hero with a decorated military career – none of Rome’s fashionable parties are complete without him – except, he hides a secret.

After his nerve is broken in Germany, the thought of genuine armed combat is enough to send him into a cold sweat of fear and shame. But this doesn’t dissuade him from living off a false reputation so he can continue a life of casual affairs, wine, and parties, as he is seduced by the many vices of Rome.

However his scandalous life is soon upset by a summons from the Emperor’s wife. It ends his happy decadent life and returns him to Germany to assist the Roman legions in their greatest ever trial, and the events that will resound down in history, in the dark forests of the Teutoburg…

Thomas Brooke lives in London where he works in the exciting, and sometimes crazy, fashion world. He is also a committed writer and he spends as much time as he can in his beloved Northumbrian hills, where up until recently could be seen walking with his black Labrador Fergus, who sadly passed in January 2015. Fergus was a constant companion to the writing of the novel and prevented many writers’ tantrums.

Roman Mask is Thomas Brooke’s second novel, although this will be the first available for sale.

As well as writing novels, he also writes a blog on both historical and fantasy genre novels.

For more information on Thomas M D Brooke, visit www.thomasmdbrooke.com and www.romanmask.com. You can also find him on Twitter, Google+, and Pinterest.

I do love my Roman reading. I will admit to a real fascination with the different Roman leaders – especially those claiming humility while owning dictatorship. In this novel it’s Augustus on the emperor’s throne with strong support from his wife. Rome is still looking to extend it’s borders into Germany but its hold is not as firm as it would like.  This sets up the tale of our fictional hero (?) Cassius.

Cassius came home from his first tour of duty in Germany a hero yet he knows that it’s a title he really didn’t earn. That does not stop him from exploiting it as he lives his life from party to party doing little more than drinking, going to the gymnasium to keep in shape to drink more and trying to sleep with beautiful women. He’s enjoying his life of useless pleasure despite pressure from his sister and father to make something of himself.

Then he receives a summons from the Emperor and he fears he has been caught for his decisions have been somewhat questionable. What he doesn’t expect is to be meeting with the Emperor’s wife and to be recruited back into the legions for an assignment back to Germany. He is not at all happy but of course there is no way to decline. He has just a few days to get himself organized to go back to what he considers the worst experience of his life.

Little does he know what is ahead of him, for you see this is a novel of the battle of the Teutoburg. For anyone familiar with Roman history you will know that this was the site of one of the greatest defeats for the Roman legions. It was a horrible loss of men and a betrayal the likes of which Rome had never seen before.

I’ve read several other books covering this period in Roman history and it was a truly horrifying bit of warfare. There is no getting around the evil man can do and these soldiers where in a forest they were not familiar with, a storm had created further problems and they had a leader too full of himself and the might of Rome. What followed was nothing short of a massacre. Rome would never really reconcile to the loss of its three Eagles and it would not try to well, Romanize these Germanic tribes again.

The book is exceptionally researched and very well written. I was drawn in from the very first page. Ancient Rome comes to life in all of its glory and menace. It’s a weighty book but one that read quickly because it is one of those books where you just get lost in the story and time flies by. Despite the dark subject matter and the gore – war is gory, there is nothing to be done about that – I didn’t want the story to end. I just love books that bring a world to life like this.