I received a free copy of Scarred for my honest review. 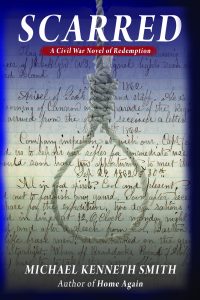 After fatally wounding the Confederate sharpshooter who killed his best friend, Zach Harkin’s sense of revenge changes to deep remorse when he views the dead man’s diary and a family photo tucked inside. Haunted, suffering from post traumatic stress, and unable to serve, he is mustered out of service. With scant information, he begins an epic journey to search for the dead man’s family. Captured, imprisoned, tortured, and thoroughly tested as a human being, he never expects to find love in the war-ravaged South he calls home.

Michael K. Smith trained as a mechanical engineer and began a successful auto parts business in the early 1980’s. He sold his business in 2000 and retired. Since then, he’s spent time fishing, golfing, cooking, and playing bridge. He’s become an oenophile, socialized, and even edited a local newspaper.

Throughout his journey, Mike’s had one thing that has always come easily to him; telling stories. And so, in 2013, Mike decided to share his stories with the world.

Scarred is not your typical Civil War novel by any stretch of the imagination. Zach Harkin is a sharpshooter in the Union Army – what we would call a sniper today. He didn’t come to his position through any great fervor or loyalty to the War cause but rather due to it just being what was to be done. He was always a good shot so his skills were assigned where they would be best used. One day he shoots a Confederate soldier, but he goes through the man’s pockets and he finds his personal belongings and realizes he is not just “the enemy” but rather he is a man with a family. That family has now lost a member due to Zach’s actions and he is conflicted about that.

Zach has not talked about his War experiences for years. In fact he pretty much keeps to himself but a reporter has been asking questions about Zach’s war time life. It’s been a while since the war has ended and maybe it’s time to talk about the horrors of that time. But can he? Can he tell his story?

This is not a long novel but it’s a rich one. The prose is spare but you don’t feel any lack because of this. The reader still finds him/herself lost in time and place for good or bad. And if that place is Andersonville prison – it’s very bad. Any student of history knows of the horrors of that place. Zach’s determination to complete what he sees as his mission get him out of that horrible place and on his way. His story is strong, compelling and one to read more than once.