A long lost sonnet of Shakespeare’s. Death threats. Mysterious groups. It all sounded so intriguing so I was happy to receive a copy of The Semper Sonnet by Seth Margolis from Historical Fiction Virtual Book Tours for my honest review. 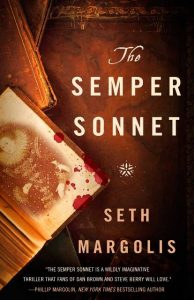 In this stunning thrill ride, perfect for fans of Dan Brown and Steve Berry, a long-lost manuscript, written for Elizabeth I, holds the key to unlocking the past—and to eliminating the future.

Lee Nicholson is ready to take the academic world by storm, having discovered a sonnet she believes was written by William Shakespeare. When she reads the poem on the air, the words put her life in peril and trigger a violent chase, with stakes that reach far beyond the cloistered walls of academia.

Buried in the language of the sonnet, in its allusions and wordplay, are secrets that have been hidden since Elizabethan times, secrets known only to the queen and her trusted doctor, but guessed at by men who seek the crown and others who seek the world. If the riddles are solved, it could explode what the world knows of the great Elizabeth I. And it could release a pandemic more deadly than the world has ever imagined.

Lee’s quest for the answers buried in the sonnet keeps her one step ahead of an international hunt—from the police who want her for murder, to a group of men who will stop at nothing to end her quest, to a madman who pursues the answers for destructive reasons of his own.

As this intelligent thriller moves back and forth between Tudor England and the present day, Lee begins to piece together the meaning behind Shakespeare’s words, carrying the story to its gasp-out-loud conclusion.

Seth Margolis is a writer whose most recent novel, THE SEMPER SONNET, was published on April 19. He is the author of six earlier novels, including LOSING ISAIAH, which was made into a film starring Halle Berry and Jessica Lange.

Seth lives with his wife, Carole, in New York City. They have two grown children, Maggie and Jack. Seth received a BA in English from the University of Rochester and an MBA in marketing from New York University’s Stern School of Business Administration. When not writing fiction, he is a branding consultant for a wide range of companies, primarily in the financial services, technology and pharmaceutical industries. He has written articles for the New York Times and other publications on travel and entertainment.

You can read an excerpt of The Semper Sonnet

There are two ways to read this book:

How a reader enjoys or doesn’t enjoy the book is going to completely depend on how much they can go with #1 rather than live in the real world of #2. I respect that the book is a work of fiction and I will admit that the author wrote with the skill to keep the pages turning but I just like my books – even my fictional books – somewhat grounded in a little bit of reality. If I keep finding myself, as a reader coming out of a story because of a feeling of unreality or impossibility I become a frustrated reader.

But if you are willing to to totally suspend belief this will be a book to keep you a reader engaged. A young woman finds a lost sonnet that she is convinced was written by William Shakespeare. As she researches and begins to announce her find she suddenly finds herself in the middle of a royal mess; the police think she has committed a murder, a secret society is trying to keep her from finding out its secrets and a madman is trying to destroy the world.

But this young woman, an expert in Shakespeare suddenly becomes adept at alluding the police and she follows clues to possibly solve a problem that has been unsolved for 500 years! All the while teaching all around her about the wonderful word play of the Elizabethans. Again – suspend reality and you have a great round the world chase with a seek and find puzzle as well. For me it was just too facile and slightly ridiculous.

Our heroine is also bad with men – she will sleep with just about any one that appeals. I suspect the author was trying to make her liberated but to me she just came off as a bit confused. It didn’t help the character development at all. Nor did the main antagonist have any real motivation. I never did understand why he did what he did. The one reason put forth seemed seriously inadequate to destroy the world.