Shadow of the Hawk by David Gilman – Book Review

I received a free copy of Shadow of the Hawk by David Gilman from the publisher for my honest review. 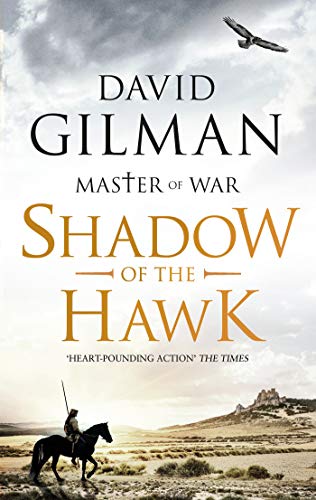 About Shadow of the Hawk:

The King is dead.

Defeated on the field of Poitiers, Jean Le Bon, King of France, honoured his treaty with England until his death. His son and heir, Charles V, has no intention of doing the same. War is coming and the predators are circling.

Sir Thomas Blackstone, Edward III’s Master of War, has been tasked with securing Brittany for England. In the throes of battle, he rescues a young boy, sole witness to the final living breaths of the Queen of Castile. The secret the boy carries is a spark deadly enough to ignite conflict on a new front – a front the English cannot afford to fight on.

So Blackstone is ordered south to Castile, across the mountains to shepherd Don Pedro, King of Castile, to safety. Accompanied only by a small detachment of his men and a band of Moorish cavalrymen loyal to the king, every step takes Blackstone further into uncertain territory, deeper into an unyielding snare.

For the Master of War, the shadow of death is always present.

David Gilman has had an enormously impressive variety of jobs – from firefighter to professional photographer, from soldier in the Parachute Regiment’s Reconnaissance Platoon to a Marketing Manager for an international publishing company in South Africa. He is also a successful television screenwriter. From 2000 until 2009 he was principal writer on A Touch Of Frost. He has lived and travelled the world gathering inspiration for his exotic adventure series along the way. Now, David is based in Devonshire, where he lives with his wife, Suzy Chiazzari.

The Englishman is a new thriller series introducing Dan Raglan, a contemporary knight errant who served in French Foreign Legion.

MASTER OF WAR is the first book of David Gilman’s series that follows the fortunes of Thomas Blackstone, a village stonemason in England sent to fight with King Edward’s army as an archer against the French in 1346. In the bloodiest of conflicts he discovers friendship, love and sacrifice but his destiny has yet to be played out. From humble beginnings this common man’s reputation becomes legend. Rich in historical detail, MASTER OF WAR propels the cast of characters on an epic journey through the violence and political intrigue of the 100 Years’ War.

David is also author of two standalone novels for adults, The Last Horseman, set during the Boer War and Night Flight to Paris, a WW11 novel that pits a reluctant hero against the Nazi forces in Paris in 1943.

My Opinion of Shadow of the Hawk:

Shadow of the Hawk is the latest (last) in the Master of War series from David Gilman. I am sorry that I have only learned about these books now rather than at the start because I know that I have missed out on a lot of great reading. I realize I could pick up the first 6 books to read later but if you could see my “to read later” books you would know why I am not. Although I might still do so because this book was that good.

Even though this book covers history I have read about many times before it seems fresh due to Mr. Gilman’s characters and his presentation of the conflict between England, France and Spain. Many of those books have focused on Simon de Montfort and his role going forward in history but here the star of the tale is Sir Thomas Blackstone – the King’s Master of War. He is a very compelling character; upstanding, righteous, but still a man of his time.

I started the book and fell quickly into the story and despite it being set in a hard world, I didn’t want to leave. The story was familiar and not all at the same time. The history of the 100 years war is well known but Mr. Gilman takes his fictional characters into the fray and the lucky reader finds that they are along for one heck of a ride – hopefully on the warhorse of the right warrior so as to survive the battle. And you will feel like you are in the heart of it.

Blackstone and his band of soldiers fight for the king  – sometimes with support and other times against overwhelming odds. They are well trained, loyal men and follow their leader where he wouldst go. Along the way they acquire a physician who happens to be Jewish and a young boy who harbours a secret that makes him a very dangerous traveling companion. But once under Blackstone’s wing he will be safe.

If you are looking for adventure and history by all means pick up this book. Be aware that it being a book about war it is not pretty and some passages are hard to read. Nothing gratuitous but war is war. And always be on the lookout for the hawk flying overhead…it might portend something momentous.