I received a free copy of She Rises from TLC Book Tours for my honest review. 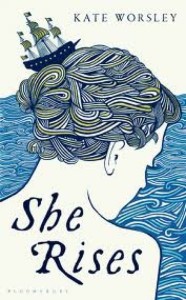 It is 1740 and Louise Fletcher, a young maid, has been warned of the lure of the sea for as long as she can remember—after all, it stole away her father and brother. But when she is offered work in the bustling naval port of Harwich serving a wealthy captain’s daughter, she leaps at the chance to see more of the world. There she meets Rebecca, her haughty and fascinating mistress.
Intertwined with Louise’s story is that of fifteen-year-old Luke, who is beaten and press ganged, sent to sea against his will on board the warship Essex in the service of His Majesty’s Navy. He must learn fast and choose his friends well if he is to survive the brutal hardships of a sailor’s life and its many dangers, both up high in the rigging and in the dark decks down below.
She Rises brings to vivid life both land and sea in Georgian England, but explores a thoroughly modern and complex love story. Bold, brilliant, and utterly original, She Rises is an accomplished and gripping search for identity and survival.

Kate Worsley was born in Preston, Lancashire, and studied English at University College London. She has worked variously as a journalist, a massage practitioner, and spotlight operator, and has a master’s in creative writing (novels) from City University London. She now lives on the Essex coast. She Rises is her first novel.

She Rises is a book that draws you in from the very first sentence. Much like the young protagonist, Luke, you feel a touch off center and confused at first but as you follow his story and that of the second character, Louise. The two stories get told side by side until it all comes together in a most surprising way – no spoilers from me!

Each story is compelling with richly drawn characters and plots that slowly draw towards each other. Ms. Worsley has a way with descriptive prose; I don’t know if she ever went to sea but she sure knows how to make her readers go there with her words. Not to mention into the sails! The sections involving Luke’s travails were both the ones I liked least and most – sort that out if you will. They were the hardest to read due to the way he was “offered his position” in His Majesty’s Navy and yet the most thrilling.

Louise’s side of the tale took a bit to get going but once it did it too, was a joy to read. Her story did not take off as quickly as Luke’s but it became – after a bit – just as enthralling. As the book came to its conclusion I was turning the pages as fast as I could. I’m keeping this for a second read. I think Luke and Louise will give me further entertainment and insights upon a calmer go-round with foreknowledge of the ending.

You can see the She Rises Tour Schedule

You can purchase She Rises on Amazon.com

One lucky reader (US/Can) will win a copy of She Rises. How do you win? It’s easy! Just hop on the Rafflecopter! Good luck everyone.

Disclosure:  I received a free copy of She Rises from TLC Book Tours for my honest review.