I read Paulette Jiles’s book News of the World and loved it so when I was offered her latest, Simon the Fiddler I was thrilled to accept. I thank TLC Book Tours for sending it to me at no charge for my honest review. 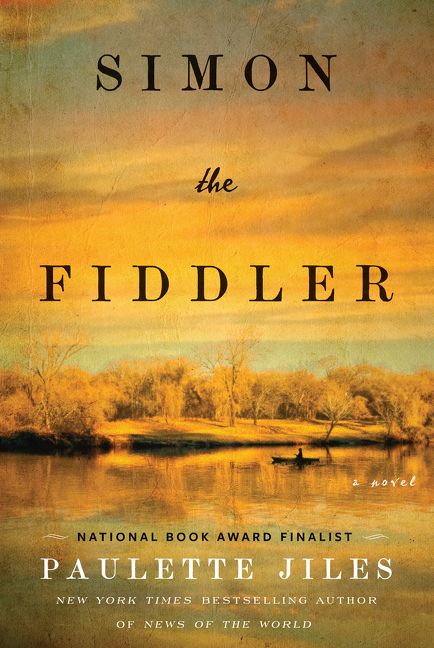 About Simon the Fiddler:

In March 1865, the long and bitter War between the States is winding down. Till now, twenty-three-year-old Simon Boudlin has evaded military duty thanks to his slight stature, youthful appearance, and utter lack of compunction about bending the truth. But following a barroom brawl in Victoria, Texas, Simon finds himself conscripted, however belatedly, into the Confederate Army. Luckily his talent with a fiddle gets him a comparatively easy position in a regimental band.

Weeks later, on the eve of the Confederate surrender, Simon and his bandmates are called to play for officers and their families from both sides of the conflict. There the quick-thinking, audacious fiddler can’t help but notice the lovely Doris Mary Dillon, an indentured girl from Ireland, who is governess to a Union colonel’s daughter.

After the surrender, Simon and Doris go their separate ways. He will travel around Texas seeking fame and fortune as a musician. She must accompany the colonel’s family to finish her three years of service. But Simon cannot forget the fair Irish maiden, and vows that someday he will find her again.

Incandescent in its beauty, told in Paulette Jiles’s trademark spare yet lilting style, Simon the Fiddler is a captivating, bittersweet tale of the chances a devoted man will take, and the lengths he will go to fulfill his heart’s yearning.

You can purchase Simon the Fiddler at Harper Collins

Paulette Jiles is a novelist, poet, and memoirist. She is the author of Cousins, a memoir, and the novels Enemy Women, Stormy Weather, The Color of Lightning, Lighthouse Island, and News of the World, which was a finalist for the 2016 National Book Award. She lives on a ranch near San Antonio, Texas.

Simon is a man who appears much younger than he is and this has been helpful in keeping him out of the army on both sides of the War Between the States. Until the very end it seems Simon is finally conscripted and he just wants to survive. It seems like he will get out clean but his regiment is attacked by a contingent of Union soldiers who didn’t seem to get the word that the war was over.

It is after this raid that Simon and some others caught up in the goings on meet and come together as musicians to perform at the “celebration.” While performing he sees the most amazing young woman and he falls immediately in love but she is indentured to the Union Colonel for a 3 year contract. He also feels he needs to be a man of substance before he can present himself to her.

Thus begins the long journey of Simon becoming a man who can be proud of himself and who feels himself worthy to ask for his love’s hand in marriage. But the Colonel is not an honorable man and it will take all that Simon has to give to find a way back to her.

Simon the Fiddler is not a fast paced book, it meanders much like a traveling fiddler would have in the time after the Civil War. Ms. Jiles has a beautifully lyrical way of writing that just draws you in and has you following along on Simon’s adventures, both big and small as he tries to find his way back to love.

It’s at times a very sweet tale and at others a very harsh tale and one that I wanted to continue. I am left wanting more which I suppose is both good and bad for the ending left me both satisfied and with several questions. I don’t know if a sequel is coming but I know I would welcome one.