Sinners and the Sea by Rebecca Kanner – Book Review 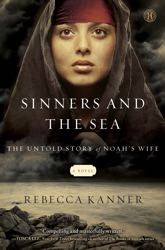 Cursed with a birthmark that many think is the brand of a demon, the young heroine in The Sinners and the Sea is deprived even of a name for fear that it would make it easier for people to spread lies about her. But this virtuous woman has the perfect voice to make one of the Old Testament’s stories live anew.Desperate to keep her safe, the woman’s father gives her to the righteous Noah, who weds her and takes her to the town of Sorum, a land of outcasts. Noah, a 600-year-old paragon of virtue, rises to the role of preacher to a town full of sinners. Alone in her new life, Noah’s wife gives him three sons, but is faced with the hardship of living with an aloof husband who speaks more to God than with her. She tries to make friends with the violent and dissolute people of Sorum while raising a brood that, despite a pious upbringing, have developed some sinful tendencies of their own. But her trials are nothing compared to what awaits her after God tells her husband that a flood is coming—and that Noah and his family must build an ark so that they alone can repopulate the world.Kanner weaves a masterful tale that breathes new life into one of the Bible’s voiceless characters. Through the eyes of Noah’s wife we see a complex world where the lines between righteousness and wickedness blur. And we are left wondering: Would I have been considered virtuous enough to save?

Rebecca Kanner’s writing has won an Associated Writing Programs Award and a Loft Mentorship Award. Her stories have been published in numerous journals, including The Kenyon Review and The Cincinnati Review. She is a freelance writer and teaches writing at The Loft in Minneapolis.

I am a big fan of Biblical fiction. There are so many fascinating tales to be further fleshed out from the stories in the Bible.  In Sinners and the Sea Noah’s story is told but from the perspective of his wife, a woman who remains unnamed. How sad is that – to go down in history without a name?

She was born with a “mark” what I guess we would call a port wine stain now. But in times less informed any difference from what was normal was considered the mark of the devil. Abandoned by her mother and sheltered by her father she grows up in fear. Afraid she will never know the love of a husband or the joys of motherhood. The surrounding villagers want to kill her and her father soon finds a solution – 900 year old Noah is looking for a virtuous wife. He will come and take her away. Our nameless woman soon becomes a wife and not long after a mother. But it is not all as she had hoped since Noah talks mostly to the God of Adam and not to her. She has only one woman who will talk to her and she is a whore of whom Noah does not approve. Her life is hard but it is only going to get worse because Noah tells her they must start building an ark as the world will soon  be destroyed.

Most of us know the story of Noah and the ark but I really had no knowledge of his wife or sons. Obviously this is a work of fiction and there is artistic license taken but it is a compelling story with the fantastical and magical elements one would expect in a Biblical tale. At the same time it humanizes Noah and not always in a good way – he comes off a bit of a nut case if you ask me. His sons don’t come off looking like saints either – they are selfish children. In fact most of the other characters in the book come off as most unpleasant. The exceptions being our heroine’s father, the whore Javan, and Javan’s simple minded daughter, Herai.

This was a fascinating book and one I finished in one sitting. I actually pulled the Bible off the shelf and read the passages pertaining to Noah after I finished the book. It was interesting to read the spare writing of the Bible after the fleshed out fiction of Sinners and the Sea. This book really packed an emotional punch while trying to tell a nameless woman’s story. The Bible stints in its treatment of women so it needs be left to historical fiction authors to bring them to life. Ms. Kanner did that most vividly in her debut work.

You can preorder Sinners and the Sea on Amazon.com for purchase on April 2

Disclosure:  I was sent a free copy of Sinners and the Sea by the publisher for my honest review. I received no compensation for this post.