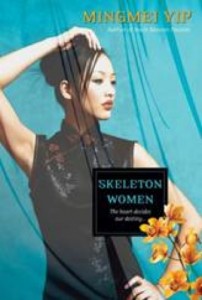 Paperback: 352 pages
Publisher: Kensington (May 29, 2012)
Skeleton Women is a Chinese phrase for femmes fatales. This story is about three of them  — Camilla, a nightclub singer who has been forced to become a spy, Shadow a magician who jumps naked off a tall building, and a gender-ambiguous gossip columnist. All must scheme in order to survive the gang wars in lawless 1930s Shanghai.
Camilla is a young orphan when she is adopted by a master crime lord and turned into the singing sensation of Shanghai. She lives in luxury but knows none of the wealth is really hers. She is one of the skeleton women, who lure men to their ruin and death. In her case, it’s literal, since she is also trained in knife-throwing and contortion.
Her assignment: attract the attention of another crime lord and help see he is assassinated. But can she stay in his good graces with competition from Shadow, a famed magician, and Rainbow Chang, the ambiguously sexed gossip columnist? And will she be able to resist falling for either the gang lord’s son or his hunky bodyguard?

Kensington author Mingmei Yip believes that one should, besides being entertained, also get something out of reading a novel. Her new novel is Skeleton Women is about survival, letting go, and finding love and compassion.
Her debut novel Peach Blossom Pavilion is the story about the last Chinese Geisha and also that of courage and the determination to succeed and attain happiness.  Her second novel Petals from the Sky, a poignant Buddhist love story, is about wisdom, compassion, when to persist and when to let go.  Her third novel Song of the Silk Road is an adventure love story between an older woman and a younger man with a three million award on China’s famous, dangerous route.
Visit Mingmei at www.mingmeiyip.com to learn about her books, music, paintings and calligraphy. You can also connect with Mingmei on Facebook and Twitter.

Camilla is an orphan plucked from obscurity by Big Brother Wang, head of one of the biggest crime families in 1930s Shanghai. He trains her as a singer, contortionist and ultimately as his deadliest weapon against his enemy – the head of the largest crime syndicate that he is determined to destroy. Camilla is taught to live without emotion; she becomes a Skeleton Woman. A femme fatale. A woman who can reduce a man to nothing.

As she ascends as the Heavenly Songbird and yes, lover of the evil Mr. Lung she confronts a new mysterious Skeleton Woman – Shadow, a magician and master of the most amazing illusions Shanghai has ever seen. She is vying to take away the affections of Mr. Lung but Camilla cannot allow that – her job is to keep him and at the right moment to kill him. Also in the mix, gossip columnist Rainbow Chang, the third of these mysterious women. She plays the other two against each other in an ever building war of talent and suspense. Who will be the ultimate Skeleton Woman? Who will survive?

This is my second of Mingmei Yip’s novels. I reviewed Song of the Silk Road last year. What I can glean from the two novels is that Ms. Yip writes very unlikable female “heroines.” Camilla is very hard to like. I recognize that she is meant to be cold but even as she starts to melt, even as she starts to feel some emotion for Mr. Lung’s son, she is just not likable. At all. The other two Skeleton Women are not prominent enough in the book to really be well defined. The reader is left wanting more. There is to be a sequel and perhaps that more will be delivered then?

There is also a problem with repetition. By the fourth or fifth chapter I think I had read that Camilla was trained to be a spy more times than I care to count. I also had it drilled into my head that she was: a.) beautiful, b.) had a 21 inch waist and c.) felt no emotion. By the time I read these pieces of information for the umpteenth time I was ready to throw the book in the river. I apparently do have emotions.

All that being vented I did find value in the reading. It is a very different kind of book in heroine, time period and plot. I would accept the sequel for review or borrow it from the library but I would not pay money for it. I have enough interest to know what happens but not enough for it to cost me.

You can purchase Skeleton Women at Amazon.com

Disclosure:  I received a copy of Skeleton Women from TLC Book Tours gratis. Any opinions expressed are my honest opinions and were not impacted by my receipt of the free book. I received no monetary compensation for this post.