Smoke in Her Eyes by Anna Belfrage – Excerpt and Book Spotlight

I am so happy to welcome Anna Belfrage today with an excerpt from her latest book, Smoke in Her Eyes. I lost my ability to communicate in the English language so I won’t be reviewing this one for you. Enjoy learning about this new tale from one of my favorite authors and getting a taste of the novel.

A persistent drizzle had Helle half-jogging all the way to the tube stations. From Banks it was a short ride
to Waterloo, and an hour or so later she was back in Winchester. No rain here, and Helle loitered on her
way back to the apartment, strolling down High Street before taking a right onto Southgate Street. By
now it was dark, and when Helle reached their building she couldn’t help but throw a look upwards,
hoping to see a light in their kitchen window. No such luck.
She changed into her gym clothes and spent the following hour working out. Still no Jason, so she
showered before inspecting the fridge for something edible. Jason came back just as she set the
finishing touches to a salad.
“Salad?” He sounded anything but impressed.
“Good for you, remember?” She stabbed her fork through a baby spinach leaf. “You used to go
and on about how important it is to eat stuff like this.”
“It is,” he said. “But usually I serve it with something.”
“Tough. At least there’s food on the table, right?”
“True.” He gave her a half-smile. “How was London?”
“OK.” She nodded at the stack of documents on the desk. “For you to review and sign off on.”
“Fantastic,” he muttered. “Can’t you do it?”
“Review my own work?” She shook her head. “Besides, it’s your money.” She leaned forward. “I
think there’s one company you’ll really like.”
“Oh?”
“High-tech stuff,” she told him, which made him smile for real.
“According to you or Nigel?” he teased mildly.
“Me.”
“Now why don’t I find that quite as impressive?” Jason asked. “Finished?”
When she nodded he proceeded to clear the table.
“You want some dessert?” she asked, following him to the sink. She slipped her arms around him
in a backward hug. He stiffened. With a sigh she released him.
“Helle, I—”
She held up her hand. She didn’t want to hear. “Chocolate or ice-cream?”
“I’ll stick with some coffee. And you know that stuff isn’t good for you,” he admonished when
Helle ripped open a Snickers. She just looked at him. She needed a fix, something to blunt the sharp
teeth of disappointment at being rejected. Again. He flushed under her scrutiny and took a step towards
her. For a moment, she hoped. Until he reached beyond her for the instant coffee. 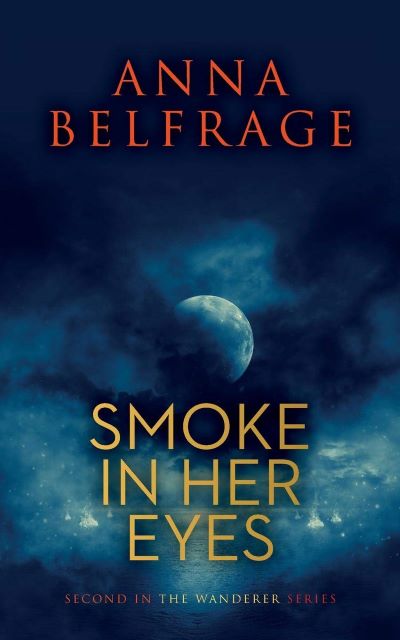 Smoke In Her Eyes
by Anna Belfrage

Six months ago, Helle Madsen would have described herself as normal. Now she no longer knows if that terms applies, not after her entire life has been turned upside down by the reappearance of not one, but two, men from her very, very distant past.

Helle Madsen never believed in mumbo-jumbo stuff like reincarnation—until she came face to face with Jason Morris, a man who purportedly had spent fifty lives looking for her. Coping with being reunited with the lover from her ancient past was one thing. Having Sam Woolf, her vindictive nemesis from that same ancient past join the party was a bit too much. Suddenly, Helle finds herself the reluctant heroine of a far-flung, time-transcending epic story, one in which pain and loss seem to play a very big part.

This time round, Jason and Helle are determined to make it to the happily ever after. Unfortunately, Sam Woolf will stop at nothing to crush them. That ride into the golden sunset seems awfully far away at times…

Wednesday, May 1
Feature at What Is That Book About

Monday, May 6
Review & Excerpt at The Book Junkie Reads

Wednesday, May 8
Interview at The Book Connection

Thursday, May 9
Review at Pursuing Stacie

Friday, May 17
Review at A Chick Who Reads

Saturday, May 18
Feature at The Lit Bitch

Monday, May 20
Review at Bookish

Thursday, May 23
Feature at Just One More Chapter

Monday, May 27
Review at So Many Books, So Little Time

Tuesday, May 28
Review & Interview at Passages to the Past

Friday, May 31
Feature at Coffee and Ink
Review at CelticLady’s Reviews