I received a free copy of Someone Else’s Love Story from TLC Book Tours for my honest opinion. I received no compensation for this post. 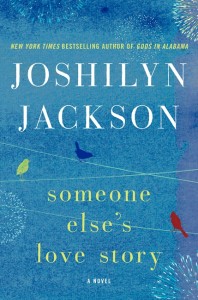 • Hardcover: 320 pages
• Publisher: William Morrow (November 19, 2013)
I fell in love with William Ashe at gunpoint, in a Circle K
For single mom Shandi Pierce, life is a juggling act. She’s finishing college; raising her delightful three-year-old genius son, Nathan, aka Natty Bumppo; and keeping the peace between her eternally warring, long-divorced Christian mother and Jewish father. She’s got enough to deal with before she gets caught in the middle of a stickup in a gas station mini-mart and falls in love with a great wall of a man named William Ashe, who steps between the armed robber and her son to shield the child from danger.
Shandi doesn’t know that her blond god has his own baggage. When he looked down the barrel of the gun in the gas station he believed it was destiny: it’s been exactly one year since a tragic act of physics shattered his universe. But William doesn’t define destiny the way other people do. A brilliant geneticist who believes in science and numbers, destiny to him is about choice.
Now, William and Shandi are about to meet their so-called destinies head-on, making choices that will reveal unexpected truths about love, life, and the world they think they know.

Joshilyn Jackson is the New York Times bestselling author of six novels, including gods in Alabama and A Grown-Up Kind of Pretty. Her books have been translated into a dozen languages. A former actor, Jackson is also an award-winning audiobook narrator. She lives in Decatur, Georgia, with her husband and their two children.
Find out more about Joshilyn at her website, connect with her on Facebook, and follow her on Twitter.

Shandi Pierce is the young mother (very young – she’s 21) of 3 year old Natty. How he came to be is unexplained for a good portion of the book other than Shandi was still technically a virgin when she gave birth to him. Her best friend, Walcott has been with her since they were both children and he has helped her through all of her struggles; including her parents divorce and continuing war over “possession” of Shandi and Natty. Shandi is going to college so to lessen her commute she is packing up and moving to a condo her father owns much to her mother’s sorrow (rage?) On the way Natty gets car sick so they stop to get some ginger ale and Shandi and Natty get caught in a robbery by a drugged out maniac. There she meets and claims to fall in love with William who is still mourning at the one year anniversary of a very tragic car accident involving his wife and daughter. William puts himself between the gunman and Natty and that’s all it took…

This is a most unusual book. It’s told in alternating points of view – Shandi’s and Williams with a lot of interjection from Walcott and William’s best friend Paula. I can’t say I loved or even liked this book much but something kept me reading. I must say that there is one big, whopping shocker of a twist that I never saw coming that turned the book totally cattywampus (my jaw literally dropped) and some things sort of made sense and others still, not so much. None of the characters were particularly likable but they were all very well drawn (excepting Paula. She was a bit one note.) The plot was carefully constructed and full of very intriguing twists and turns and yet the book was … boring somehow. I wish I could explain it better. It could have been so much more.

You can see the Someone Else’s Love Story Tour Schedule

You can purchase Someone Else’s Love Story on Amazon.com

Dislcosure:  I received a free copy of Someone Else’s Love Story from TLC Book Tours for my honest opinion. I received no compensation for this post.