As you all know by now I do love historical fiction but what I read usually takes place in England or France. Song of Praise for a Flower by Fengxian Chu took me far from my usual all the way to China. And calling this one fiction is a bit of a misnomer. You will see exactly why below. I thank the publisher for sending me a copy at no charge for my honest review. 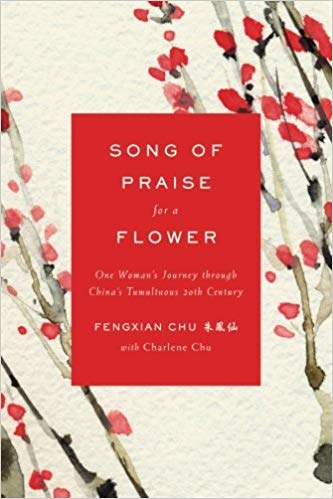 About Song of Praise for a Flower:

For nearly two decades, this manuscript lay hidden in a Chinese bank vault until a long-lost cousin from America inspired 92-year-old author Fengxian Chu to unearth it.

Song of Praise for a Flower traces a century of Chinese history through the experiences of one woman and her family, from the dark years of World War II and China’s civil war to the tragic Great Leap Forward, Cultural Revolution, and beyond. It is a window into a faraway world, a sweeping epic about China’s tumultuous transformation and a harrowing yet ultimately uplifting story of a remarkable woman who survives it all and finally finds peace and tranquility.

Chu’s story begins in the 1920s in an idyllic home in the heart of China’s rice country. Her life is a struggle from the start. At a young age, she defies foot-binding and an arranged marriage and sneaks away from home to attend school. Her young adulthood is thrown into turmoil when the Japanese invade and ransack her village. Later her family is driven to starvation when Mao Zedong’s Communist Party seizes power and her husband is branded a ‘bad element.’

After Mao’s death in the 1970s, as China picks up the pieces and moves in a new direction, Chu eventually finds herself in a glittering city on the sea adjacent to Hong Kong, worlds away in both culture and time from the place she came from.

“Fengxian Chu’s first-person account of growing up female in feudal rural China is ultimately as uplifting as it is heart wrenching. Beautiful and bravely written. Bravo.” – Michael J. Totten, author of Where the West Ends

Raised in Hunan Province, China, Fengxian Chu spent most of her life living and working on a farm. She attended college briefly, but her education was interrupted when the Japanese army invaded her village in the 1940s. A writer and poet from a young age, she is unique among her generation of rural Chinese women, the majority of whom never attended school and are illiterate. “Song of Praise for a Flower” is Fengxian’s first work to be published, and among the only known first-person accounts from a woman of her generation about life during China’s turbulent past century. Now in her 90s, she enjoys gardening and spending time with her children, grandchildren, and great grandchildren. She resides in Shenzhen, China.

Co-author Charlene Chu, Fengxian’s first cousin, grew up in the United States and wrote the English rendering of “Song of Praise for a Flower.” A financial analyst well-known for her work on China’s economy and financial sector, she is quoted widely in the Wall Street Journal, Financial Times, Bloomberg, Business Insider and other media outlets. She holds an MBA and MA in International Relations from Yale University. “Song of Praise for a Flower” is her first book. Charlene splits her time between Washington, DC and Hong Kong.

Charlene Chu was on a trip to China and was on a quest to learn more about her father’s history. In her quest she found so much more that she could have hoped. In searching for where her father was born she actually found some surviving members of his family. They led her to her father’s cousin, Fengxian who was still alive but living near Hong Kong. Charlene traveled to see her and found that she had written journals telling the story of her life. It was a remarkable thing given that women from her generation were rarely literate. Fengxian wanted to leave the story to her children but was excited at the idea of having the story published. Charlene worked at getting it translated and packaged for Western readers and Song of Praise for a Flower was born.

The story is a fascinating one. Fengxian was a headstrong young woman; she fought against the tradition of foot binding and the marriage her mother arranged for her. She continued her education to college where it was sadly interrupted by WWII. Her life did conform to the traditional when she married to a degree but she mostly kept her bold spirit.

It does take a bit to get used to the rhythm of the writing. It is written in a very linear style and it feels very close. Fengxian lived a very cloistered life to a degree and she readily admits that she paid no attention at all to world or China affairs so their is no surrounding context to the actions in the book. I spent a bit of time with Mr. Google to help my meager knowledge of the history of the time.

This is truly a character driven tale and they are strong and memorable. I found myself thinking about this story long after I finished it.