I received a free copy of Songs of Willow Frost from TLC Book Tours for my honest opinion. I received no other compensation for this post. 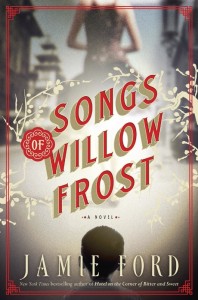 Publisher: Ballantine Books (Sept 10, 2013)
Pages: 352
From Jamie Ford, the New York Times bestselling author of the beloved Hotel on the Corner of Bitter and Sweet, comes a much-anticipated second novel. Set against the backdrop of Depression-era Seattle, Songs of Willow Frost is a powerful tale of two souls—a boy with dreams for his future and a woman escaping her haunted past—both seeking love, hope, and forgiveness.
Twelve-year-old William Eng, a Chinese American boy, has lived at Seattle’s Sacred Heart Orphanage ever since his mother’s listless body was carried away from their small apartment five years ago. On his birthday—or rather, the day the nuns designate as his birthday—William and the other orphans are taken to the historical Moore Theatre, where William glimpses an actress on the silver screen who goes by the name of Willow Frost. Struck by her features, William is convinced that the movie star is his mother, Liu Song.
Determined to find Willow and prove that his mother is still alive, William escapes from Sacred Heart with his friend Charlotte. The pair navigate the streets of Seattle, where they must not only survive but confront the mysteries of William’s past and his connection to the exotic film star. The story of Willow Frost, however, is far more complicated than the Hollywood fantasy William sees onscreen.
Shifting between the Great Depression and the 1920s, Songs of Willow Frost takes readers on an emotional journey of discovery. Jamie Ford’s sweeping novel will resonate with anyone who has ever longed for the comforts of family and a place to call home.

The son of a Chinese American father, Jamie Ford is the author of the New York Times bestselling novel Hotel on the Corner of Bitter and Sweet, which won the Asian-Pacific American Award for Literature. Having grown up in Seattle, he now lives in Montana with his wife and children.
Connect with Jamie on his website, Facebook, Twitter, and Pinterest.

I did not read Mr. Ford’s first book, On the Corner of Bitter and Sweet, although I have seen all of the excellent reviews so when I was offered the opportunity to read this novel I was quite happy to do so. The buzz around his first book and the storyline of this one had me anticipating a good read and I was not disappointed. Songs of Willow Frost is not a happy book by any stretch of the imagination – the tale of a young Chinese American orphan in Seattle during the depression is not going to be a tale full of joy. It was though, a story that kept me glued to its pages through all of the sadness and horror of poor Willow’s life even as she found some modicum of success as a movie star.

Young William is an orphan at the Sacred Heart Orphanage and while out celebrating the collective birthday that all the boys have been assigned he sees a photo of a movie star – Willow Frost – and he knows, he just KNOWS that this is his mother. The mother he last saw being carried away looking quite dead. He was left alone and no one ever came back for him which is why he has been in the orphanage for almost 8 years now. He has to meet Willow Frost to confirm what he knows in his heart. He and his one friend at the orphanage, a blind girl named Charlotte escape and conspire to meet Willow.

The book is really two stories; William’s and Willows. They are told in alternating chapters and the reader learns how both came to be where they are. Neither story is really easy but consider the times – we are talking 1920 Seattle and a Chinese American woman on her own. Did she really have any kind of a chance? The book does have melodramatic overtones but I think they are necessary for the telling and for the time in which the tale is told. William’s story takes place during the Depression – not much happy going on then.

I found the characters to be very well developed and very unique and interesting. The writing was magical. I felt myself lost in the world Mr. Ford created and could feel the damp of the atmosphere and the squalor of the inner city. When he described the theater where Willow performed I experienced the wonder along with William and his friend Charlotte due to the way it was written to me. I’ll keep this one for another read.

You can see the Songs of Willow Frost Tour Schedule

You can purchase Songs of Willow Frost on Amazon.com

One lucky US reader will win a copy of Songs of Willow Frost. How do you win? It’s easy – just hop on the Rafflecopter! Good luck everyone.

Disclosure: I received a free copy of Songs of Willow Frost from TLC Book Tours for my honest opinion. I received no other compensation for this post.