After quite a stretch reading current fiction I return to my love, historical fiction with Sons of Blackbird Mountain by Joanne Bischof. I thank TLC Book Tours for sending me a copy of the book at no charge for my honest review. 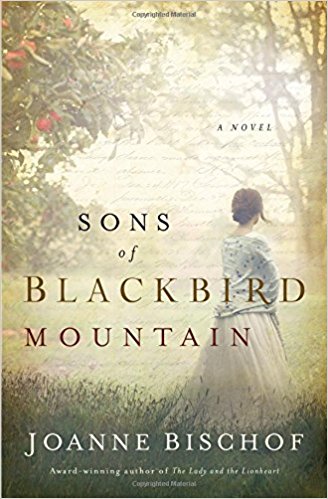 About Sons of Blackbird Mountain:

After the tragic death of her husband, Aven Norgaard is beckoned to give up her life in Norway to become a housekeeper in the rugged hills of Nineteenth-Century Appalachia. Upon arrival, she finds herself in the home of her late husband’s cousins—three brothers who make a living by brewing hard cider on their three-hundred acre farm. Yet even as a stranger in a foreign land, Aven has hope to build a new life in this tight-knit family.

But her unassuming beauty disrupts the bond between the brothers. The youngest two both desire her hand, and Aven is caught in the middle, unsure where—and whether—to offer her affection. While Haakon is bold and passionate, it is Thor who casts the greatest spell upon her. Though Deaf, mute, and dependent on hard drink to cope with his silent pain, Thor possesses a sobering strength.

As autumn ushers in the apple harvest, the rift between Thor and Haakon deepens and Aven faces a choice that risks hearts. Will two brothers’ longing for her quiet spirit tear apart a family? Can she find a tender belonging in this remote, rugged, and unfamiliar world?

A haunting tale of struggle and redemption, Sons of Blackbird Mountain is a portrait of grace in a world where the broken may find new life through the healing mercy of love.

A Christy and Carol Award winner, Joanne Bischof writes deeply layered fiction that tugs at the reader’s heartstrings. She lives in the mountains of Southern California with her three children.

The book opens with a young woman searching for a farm with her “aunt” Dorothe and some young boys that need tending. Aven has left all she knows and come to America after the death of her husband – this family are his cousins and she has no other family. She soon learns that the young boys are really young men and that sadly, Aunt Dorothe has died.

Aven is unsure of what to do but chooses to stay with the family as she truly has nowhere else to go. She settles in slowly getting to know all three of the brothers; Jorgen who is waiting for his fiance to arrive, Hakkon who is young and impulsive and most intriguing of all, Thor who is Deaf and also unable to speak.

The two unattached brothers both show attention to Aven but it is Thor whom she finds herself drawn to but he likes the cider he produces from the family orchards a little too much. She has had experience with one man who cared too much for alcohol and she is leery of starting to care for another. Will Thor be able to curb his drinking?

The story also deals with issues of race, domestic abuse  among others so there is a lot to unpack in this one volume. There is to be a sequel so I would expect some of the questions left to be addressed when that comes out.

I truly enjoyed the story – especially when reading the character driven sequences. Ms. Bischof has created some very rich and diverse people to populate her novel. There were some that appeared who were not nearly as well drawn and hopefully their stories will be fleshed out in the that second book. I will admit that when the story left the people and veered into process I did find myself not quite as interested. For example – when the apples were being harvested the description of the harvest was a little flat. And long. I respect the need to include the scene setting but in some cases it just went on too long.

I did read the book in one sitting over one afternoon so it obviously kept me turning the pages. I will look forward to the arrival of book two.

Share3
Tweet
Yum
Share
Pin6
Email
Must Have Footwear for This Farmgirl – Farm Fashion Friday
How to Use Russian Piping Tips to Decorate Cakes, Cupcakes and More