Sorcery for Beginners by Matt Harry – Book Review with a Giveaway

I don’t read many young adult (YA) books but every now and then one piques my interest. Sorcery for Beginners by Matt Harry sounded like it would be an entertaining diversion for me so when the publisher offered me a copy to review at no charge I said yes. 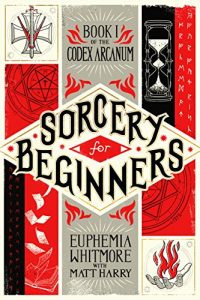 About Sorcery for Beginners:

Five-hundred years ago, sorcery began to fade from the world. As technology prevailed, combustion engines and computers replaced enchanted plows and spell books. Real magicians were hunted almost to extinction. Science became the primary system of belief, and the secrets of spell-casting were forgotten. That is … until now.

Sorcery for Beginners is no fantasy or fairy tale. Written by arcane arts preservationist and elite mage Euphemia Whitmore (along with her ordinary civilian aide Matt Harry), this book is a how-to manual for returning magic to an uninspired world. It’s also the story of Owen Macready, a seemingly average 13-year-old who finds himself drawn into a centuries-long war when he uses sorcery to take on a school bully. Owen’s spell casting attracts the attention of a ruthless millionaire and a secret society of anti-magic mercenaries, all of whom wish to use Sorcery for Beginners to alter the course of world history forever.

About the Author and Illustrator:

Matt Harry received an MFA in Film Production from USC’s School of Cinematic Arts, and has worked as a filmmaker, editor, screenwriter, college professor, movie critic, and story consultant. His writing has been published in the Cleveland Plain Dealer, the Akron Beacon-Journal, and the textbook The Elements of Style. He has received accolades from the FOX Comedy Script Contest, the Austin Film Festival, the Launchpad Manuscript Competition, and the Nicholl Fellowships. He lives in Los Angeles with his wife and two sons. Sorcery for Beginners is his first novel.

Juliane Crump grew up in Los Angeles. She studied music in high school, art history at Yale, and film at USC before becoming a graphic designer for film and television. You can find her work on ABC, NBC, FOX, HBO, and at sloegoods.com. While sorcery eludes her, she makes magic every day with her Wacom tablet, her bagpipes, and her family of boys.

The hero of this book is a very ordinary teenager. His mother has decided that she needs more in her life so she has left the family to pursue other interests leaving Owen passing through life. Until his father decides to take a job in another city. While there some bullies start after Owen – he escapes by entering a very unique book store and soon his life is changed.

Owen is offered a book that shows him a spell that can rewind history but it comes with rules and responsibilities. Owen agrees to everything but all he cares about is the spell that will bring his family back together but the book will not let him skip steps. Soon he and his friends are in a battle to save the book (and the world?) from an evil millionaire who wants the book for nefarious purposes.

This was a diverting and entertaining read. It was not overly complicated but it is written for middle grades. That being noted it did keep me interested and I’d be very likely to read a follow up book were one to be written. The ending wasn’t perfect and there were some other things that niggled but I honestly can’t say if that is because I’m and old woman or the fault of the book. The things that struck me as being unrealistic may not strike the intended reader as so – I am, of course, reading from an adult’s point of view. I would though recommend this book for any of you that want a diversion from your normal reading or who have children who enjoy the magical, mystical worlds. The illustrations are absolutely charming and truly add to the overall tale.

Two lucky US readers will win a copy of Sorcery for Beginners. Just enter as many ways as you would like on the Gleam widget below. Full rules are on the widget. Good luck everyone.