I received a free copy of Spartacus: Rebellion from Historical Fiction Virtual Book Tours for my honest review. 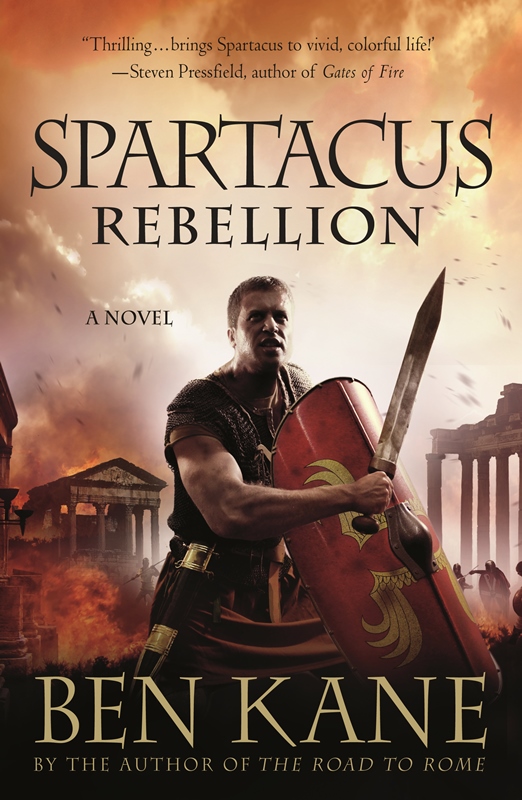 Spartacus has already done the impossible—not only has he escaped from slavery, he and his seconds have created a mighty slave army that has challenged Rome and defeated the armies of three praetors, two consuls, and one proconsul. On the plain of the River Po, in modern Northern Italy, Spartacus has defeated Gaius Cassius Longinus, proconsul and general of an army of two legions. Now the road home lies before them—to Thrace for Spartacus, and to Gaul for his seconds-in-command, Castus and Gannicus.
But storm clouds are gathering on the horizon. One of Spartacus’s most powerful generals has defected, taking his men with him. Back in Rome, the immensely rich Marcus Licinius Crassus is gathering an unheard-of Army. The Senate has given Crassus an army made up of ten legions and the authority to do whatever it takes to end the slave rebellion once and for all.

Meanwhile, Spartacus wants to lead his men over the Alps and home, but his two seconds have a different plan. They want to march on Rome itself and bring the Republic to its knees. Rebellion has become war. War to the death.


Ben Kane was born in Kenya and raised there and in Ireland. He qualified as a veterinary surgeon from University College Dublin, and worked in Ireland and the UK for several years. After that he travelled the world extensively, indulging his passion for seeing the world and learning more about ancient history. Seven continents and more than 65 countries later, he decided to settle down, for a while at least.

While working in Northumberland in 2001/2, his love of ancient history was fuelled by visits to Hadrian’s Wall. He naïvely decided to write bestselling Roman novels, a plan which came to fruition after several years of working full time at two jobs – being a vet and writing. Retrospectively, this was an unsurprising development, because since his childhood, Ben has been fascinated by Rome, and particularly, its armies. He now lives in North Somerset with his wife and family, where he has sensibly given up veterinary medicine to write full time.

To find out more about Ben and his books visit www.benkane.net.

This is a worthy sequel to Spartacus: The Gladiator. I thoroughly enjoyed that first book in this series and it concludes as it must in Spartacus: Rebellion. Despite knowing exactly what would happen I found myself turning the pages hoping that it would turn out better for Spartacus and his band of slaves/warriors. Mr. Kane’s writing had me so involved in their tale I had completely forgotten the history I knew – or perhaps having Spartacus brought to such vivid life made me want to stay alive.

This is, be warned, a book of war and war is never easy to wage or read. The Romans were not known for their erm, kindness to those they vanquished and Spartacus gave as good as the Romans that enslaved him. So be forewarned – there is a bit of blood, guts, gore and downright ick in this book but it is never exploitative or misplaced. War IS hell.

Mr. Kane uses what little history left to us about Spartacus and he leaves his reader with a fleshed out story of very real possibilities –  he posits that Caesar might have been a mitigating factor in Spartacus’s loss. After all Caesar was one of the greatest generals and tacticians to come out of that era. He provides educated suggestions as to the unanswered questions to some of Spartacus’s more unexplained moves. All very plausible given the times and the actions of others. All making for a book that was very, very hard to put down.

I LOVE Roman history. It’s second for me after the Tudor period and I’ve read any number of books taking place in this time period. Mr. Kane re-creates that world – violent as it may be – as well as any other author I have read. He is one of those authors who leave me having a hard time coming back into reality after having been living in the world he creates with his words. I thank him for that because I love nothing more than getting lost in a book.

You can see the Spartacus:  Rebellion Tour Schedule

You can read my review of Spartacus: The Gladiator

Disclosure:  I received a free copy of Spartacus: Rebellion from Historical Fiction Virtual Book Tours for my honest review. I received no compensation for this post.