I was sent a free copy of The Spice Box Letters for my honest review. 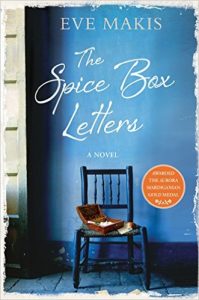 Katerina inherits a scented, wooden spice box after her grandmother Mariam dies. It contains letters and a diary, written in Armenian. As she pieces together her family story, Katerina learns that Mariam’s childhood was shattered by the Armenian tragedy of 1915.

Mariam was exiled from her home in Turkey and separated from her beloved brother, Gabriel, her life marred by grief and the loss of her first love. Dissatisfied and restless, Katerina tries to find resolution in her own life as she completes Mariam’s story – on a journey that takes her across Cyprus and then half a world away to New York.

Miracles, it seems, can happen―for those trapped by the past, and for Katerina herself.

EVE MAKIS studied at Leicester University and worked as a journalist and radio presenter in the UK and Cyprus before becoming a novelist. She is the author of The Spice Box Letters. Eve is a part time tutor in creative writing at Nottingham University. She is married with two children and lives in the UK and Cyprus.

I had limited knowledge of the Armenian genocide going into this book and I will admit that I now want to learn more as horrifying as the story is – as any attempted genocide would be. It’s a book using the currently popular conceit of going back and forth between the present and future to move the story forward in time. It’s a method of story telling that drives me a bit crazy but I do understand the author’s use of it.

Katerina loses her beloved grandmother; she of the warm hugs, delicious meals and sad silences. She would never share her history with her family and now she is gone so the questions Katerina and her mother have might never be answered. She does leave behind a spice box and inside are possible answers in the form of some letters and a diary – but they are written in Armenian and this seems to stop any forward progress.

This is where the book fell apart for me. Instead of trying to find someone to translate the find Katerina heads off on holiday to Greece. There she meets a boy and lo and behold, he is Armenian! She gives this almost perfect stranger her family’s most treasured and private family secrets to translate for her. They go off and have dates and fun and while they are doing that we learn of the horrors of Katerina’s grandmother’s life.

It was a bit jarring to say the least.

While this is going on there is another plot line with an Armenian man named Gabriel who seems to have not accepted the 21st century. He is still lost in a world where Armenians only mix with and marry their own kind. He was separated from his family in the forced march from Turkey. He has been searching for his sister since that time. He finally gets some word of her – will it finally ease his mind? And what does his story have to do with Katerina’s?

Don’t look to this review to find out. I’m not going to spoil it all. I will say that I far more enjoyed – if that is the appropriate word – the book when it was taking place in the past. The bits in the present were too precious and contrived. I do believe that these types of stories do need to be told because as time goes on these horrors are forgotten and lost to history and we cannot allow that to happen.