I read Metropolis by Ellie Midwood and enjoyed it so when the sequel came out I was excited to read it. I thank Historical Fiction Virtual Book Tours for sending me a copy of Spies at no charge for my honest review. 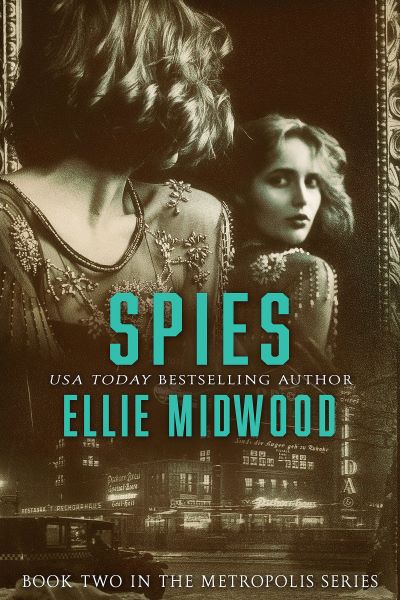 Much like the rest of Berlin’s artistic elite, Margot von Steinhoff is too preoccupied with her work on the set of the infamous Fritz Lang, to pay attention to the dark shadow of the nationalistic threat hanging over the city. When Ernst Weniger, her former lover and now an official NKVD officer, asks for her help in aiding the German communists, she refuses at first, choosing to stay apolitical, just like Lang. However, when the new Gauleiter of Berlin, Joseph Goebbels, arrives in the city and begins his relentless campaign of harassment and misinformation, Margot realizes that staying neutral is no longer an option. Playing on the wrong side can cost her not only her career but her freedom, yet Margot has never been more certain of her choice.

“I don’t read political newspapers, Margot. I only want to make my films… I don’t want to have anything to do with all those politics.”

“I don’t want to have anything to do with them either. But the sad fact is that sometimes politics wants to have everything to do with us, regardless of our desires. At some point, all of us will have to take sides. The good news, Fritz, is that I’ll always be on yours.”

Dark, gritty, yet full of hope, “Spies” is the novel of the doomed Weimar Republic and the last generation of free-thinking artists who lived and created their masterpieces in a city, on the verge of collapse.

Ellie Midwood is a USA Today bestselling and award-winning historical fiction author. She owes her interest in the history of the Second World War to her grandfather, Junior Sergeant in the 2nd Guards Tank Army of the First Belorussian Front, who began telling her about his experiences on the frontline when she was a young girl. Growing up, her interest in history only deepened and transformed from reading about the war to writing about it. After obtaining her BA in Linguistics, Ellie decided to make writing her full-time career and began working on her first full-length historical novel, “The Girl from Berlin.” Ellie is continuously enriching her library with new research material and feeds her passion for WWII and Holocaust history by collecting rare memorabilia and documents.

In her free time, Ellie is a health-obsessed yoga enthusiast, neat freak, adventurer, Nazi Germany history expert, polyglot, philosopher, a proud Jew, and a doggie mama. Ellie lives in New York with her fiancé and their Chihuahua named Shark Bait.

Spies picks up after the first book in the series, Metropolis left off. That’s not to say that it can’t be read on its own. It certainly can but as with most books that are part of series it just makes the story richer to have read what came before. In this case the hero and heroine, Margot and Paul are still trying to make movies – Margot stalling on going to work with Paul and being approached by her old boss Fritz Lang and Paul off again shooting in the mountains with Leni Riefenstahl. What none of them can do anything about is the continuing rise of the Nazi Party in Germany.

Margot immerses herself in her work and life in Weimar Germany – it’s still a time of reckless abandon but the tides are starting to turn. She is determined to stay apolitical but that proves ever more difficult as soon it’s a matter of deciding what it’s worth to remain neutral.

As with the first book, Ms. Midwood brings the period to vivid life – the good, the bad and the downright ugly. She uses the actual words of the real people in her tale to bring a sense of reality to the fiction. It was not a pretty time in history and she doesn’t spare her reader.

Margot and Paul are the kind of characters you can really root for as they try to walk a fine line in a difficult world. I zipped through the book reading it one afternoon as I found I could not put it down. Despite it not being my favorite time period for historical fiction, Ms. Midwood brings the film era of the time to vivid life, detailing a small slice of that era that I knew very little about 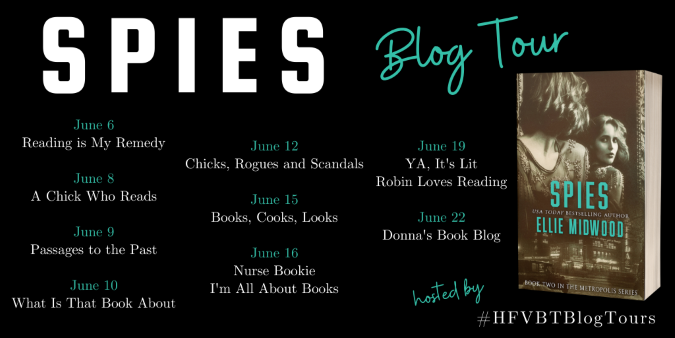 During the Blog Tour, we are giving away a paperback copy of Spies by Ellie Midwood! To enter, please use the Gleam form below.

– Giveaway ends at 11:59 pm EST on June 22nd. You must be 18 or older to enter.
– Paperback giveaway is open to the US only.
– Only one entry per household.
– All giveaway entrants agree to be honest and not cheat the systems; any suspicion of fraud will be decided upon by blog/site owner and the sponsor, and entrants may be disqualified at our discretion.
– The winner has 48 hours to claim prize or a new winner is chosen.