Spring Cleaning Tips with Arm and Hammer – and More!

Today’s post on spring cleaning tips is brought to you by Arm and Hammer.

Living with 6 cats and a rabbit is … interesting and at times a bit messy. The cat boxes are in the basement so that is good but the bunny abides in the living room. In fact, I documented the building of his rabbit cage. Cappuccino refers to it as his “Abode” since he feels he should not have a cage. Don’t worry – he doesn’t spend the day in it. He free ranges throughout the living room and we put him in at night. It also gives him a place to get away from all of the cats should he choose. The cage is in a little area dedicated for him with his feeder, his hay and his toys. 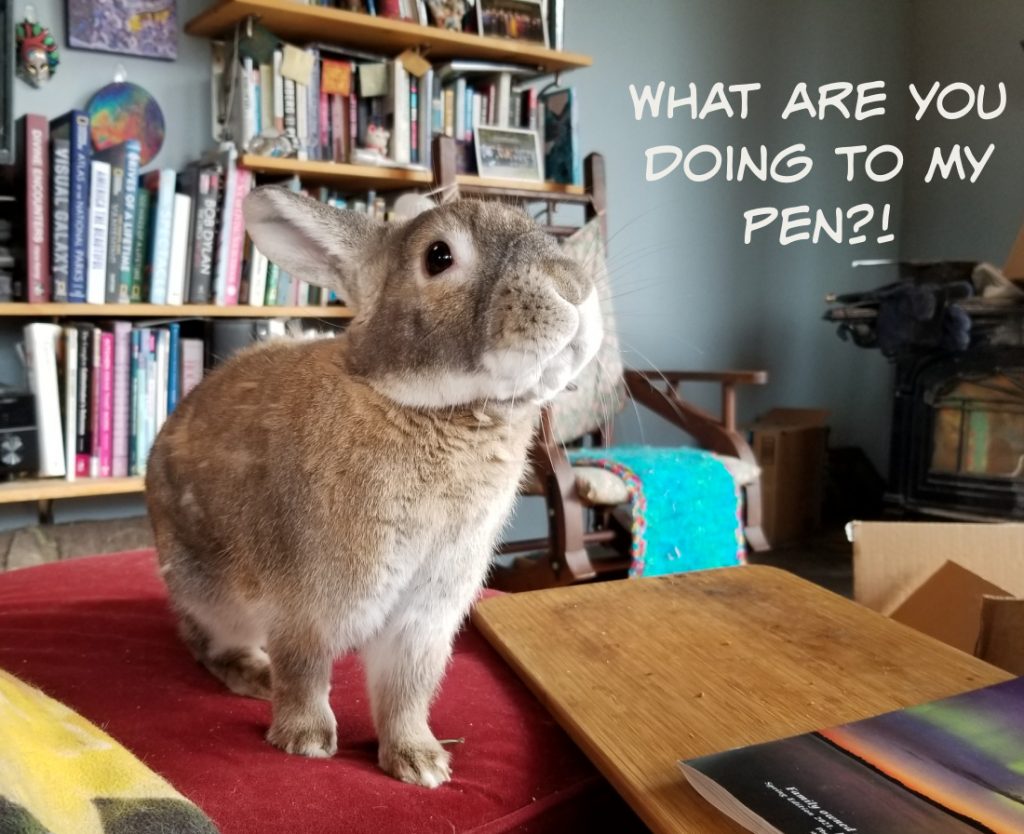 Cappuccino has his dedicated living area but I will note that he is a sloppy bunny. I decided it was time to do some spring cleaning with Arm and Hammer Disinfecting Wipes in and around his Abode. He did not approve, I can tell you that. I can also tell you that it very much needed to be done. Cappuccino is not exactly a neat bunny. 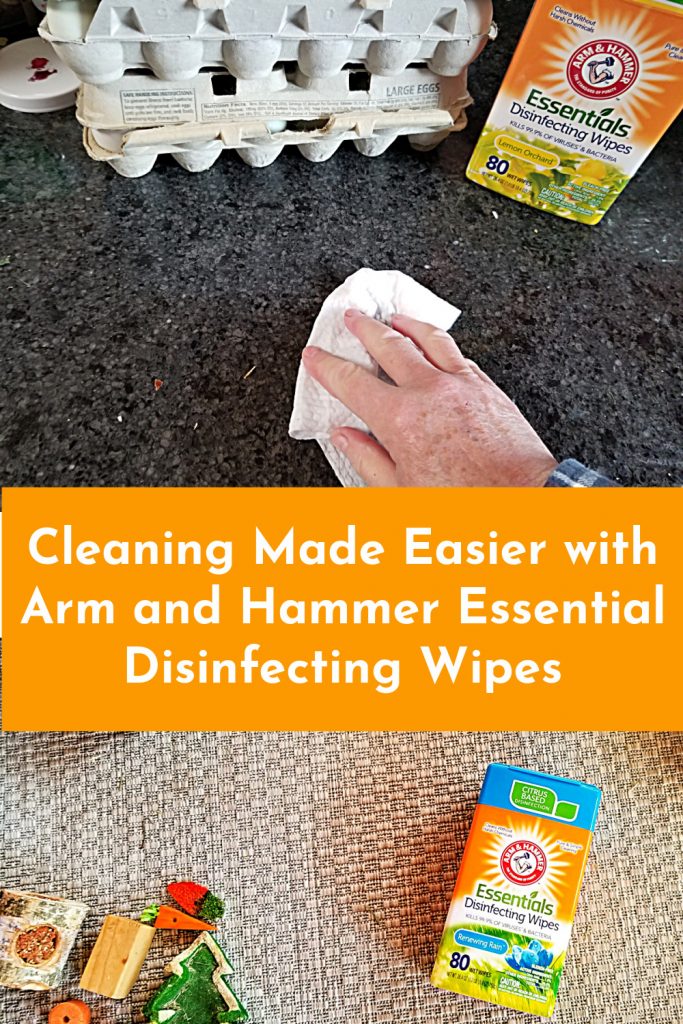 Arm and Hammer sent me their citrus scented Essentials Disinfecting Wipes. I would like to note that they are very convenient to have on hand. When I decided it was time to do a spring cleaning on Cappuccino’s pen I grabbed them and went to work. 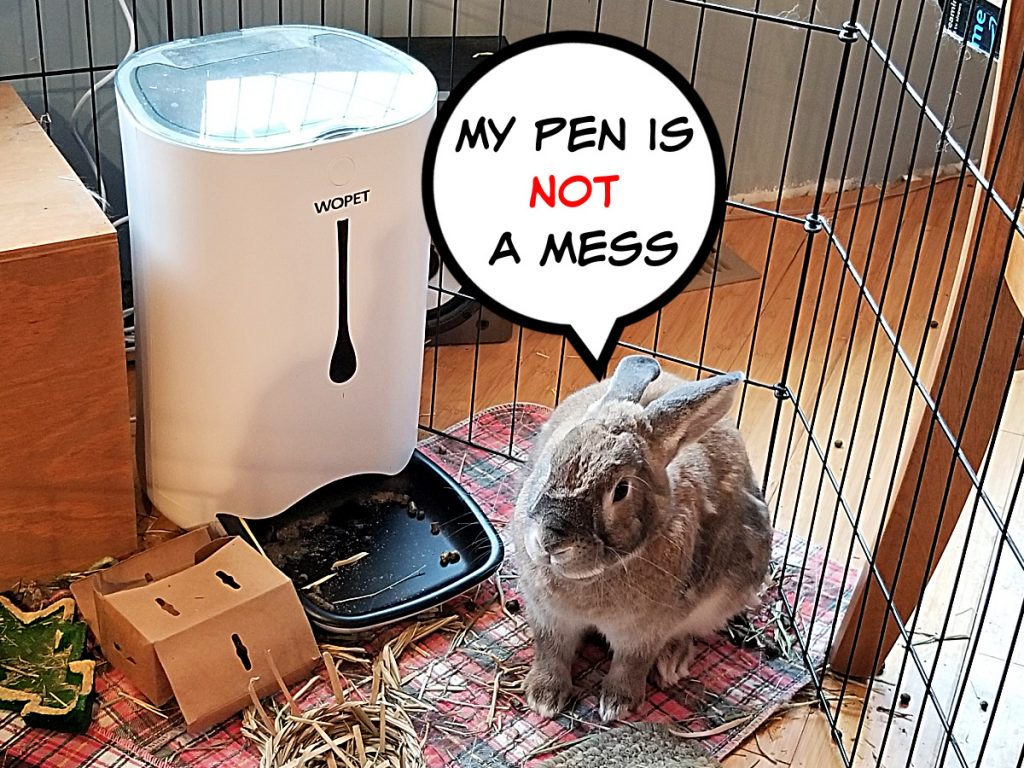 Some bunny was not happy I had decided to undertake this endeavor. I had to disagree with him though – his pen was a very big mess. There was hay everywhere and an odor coming from … somewhere. I had to find out what was causing it and then eradicate it.

The easiest way to do this was to take everything out. I say easiest but it wasn’t easy. Planning started a week earlier when I ordered a new rug to put down to replace the runners that were there. I figured a single rug would do a better job than using two as we had been doing. After searching, I found an indoor/outdoor rug in a neutral color that I thought would be perfect. 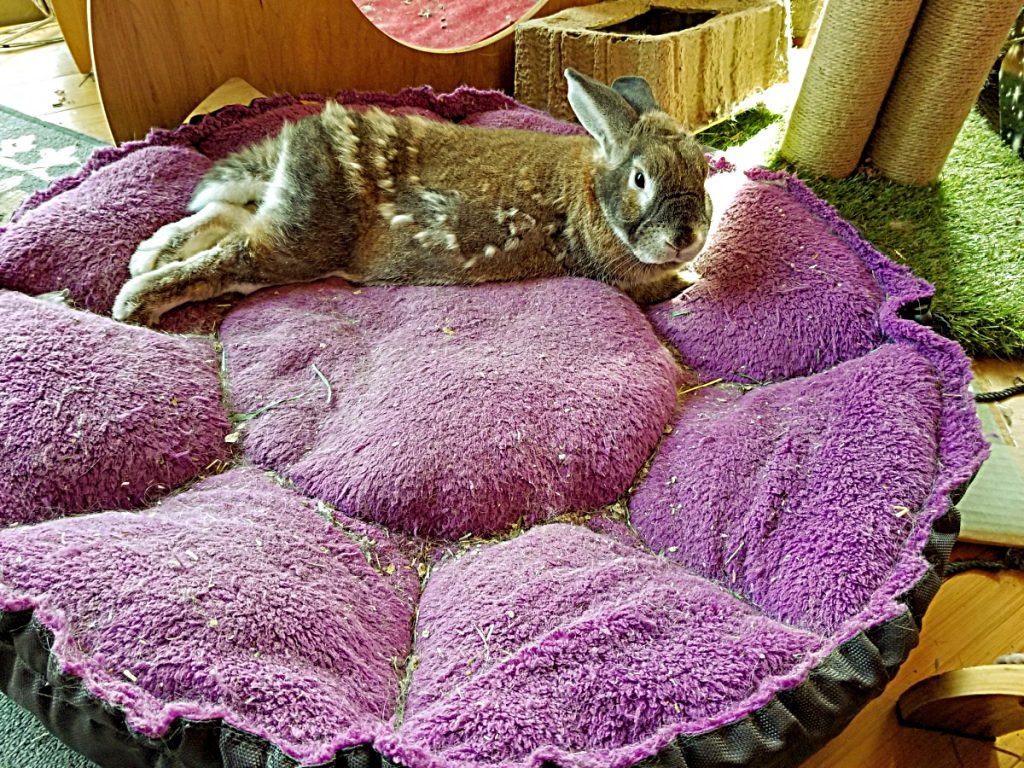 Then I got started. I shoo-ed Cappuccino out and started dismantling his area. He went and settled down on one of the cat beds because as per usual one of the cats was asleep on his bed!

First Step – Get it All Out

I took everything out – his Abode, his toys, his automatic feeder and the old rugs. That left me with a bit of a mess to sweep up which I did and then I found the source of the stink. The little bugger had failed to use his litter box and somehow managed to do so between the two runners.

Of course he did. 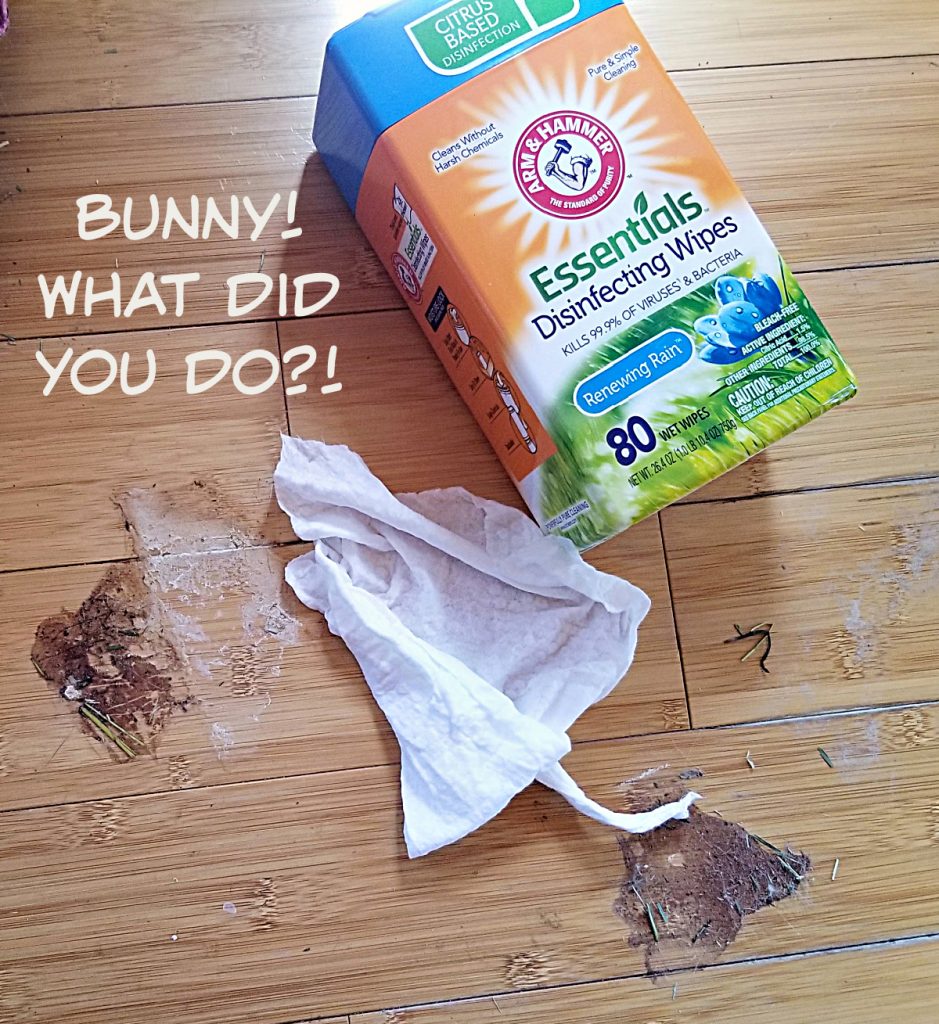 Ugh.  Thankfully I had the Arm and Hammer disinfecting wipes to help get rid of that smelly mess. They made short work of Cappuccino’s erm, gifts. 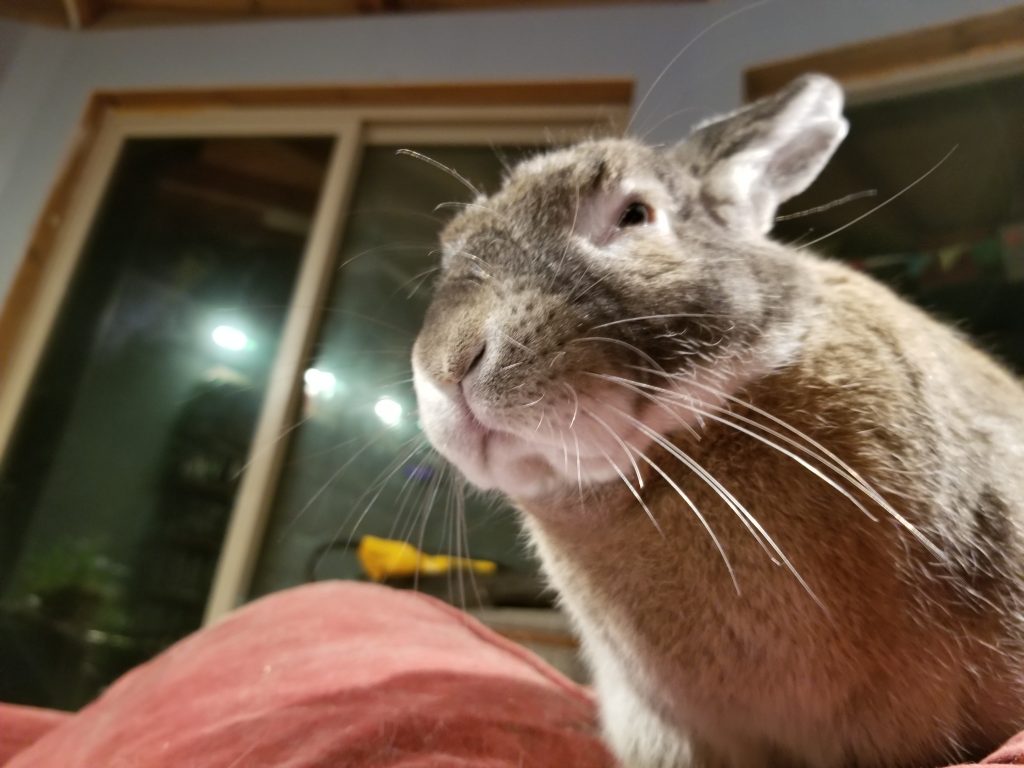 I will note that the bunny was unrepentant. He did not care that he made that smelly mess for me to have to clean up. So far he has not repeated this behaviour. My fingers are crossed…

Second Step – Make a Nice Space for Your Bunny

After the floor was all cleaned up I unrolled the new rug – ONE rug big enough to cover the space – and started bringing Cappuccino’s things back into his space. I found a box to help contain his hay instead of just piling it up on the floor. Needless to note, he is eating the box along with his hay. 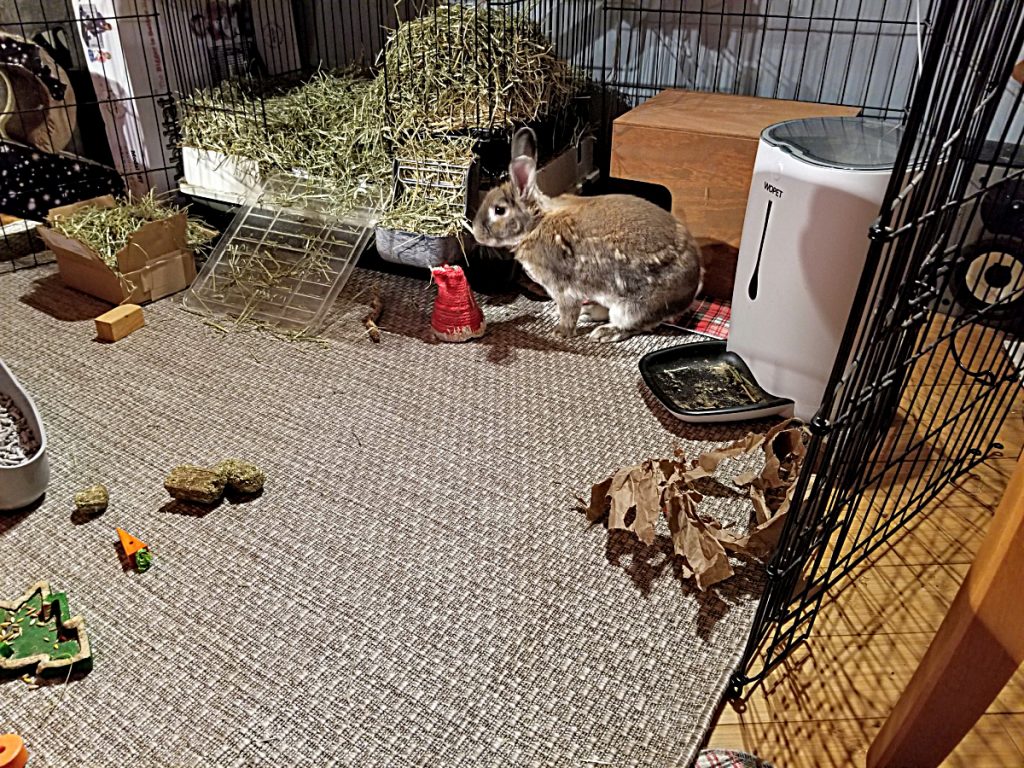 He was a very happy bunny to have his little area back to normal. Whether he was happy that all was nice and clean I could not tell you. I don’t read bunny minds. He has his chew toys, the Abode, his feeder and the litter box. Let’s keep our fingers crossed that he uses it! 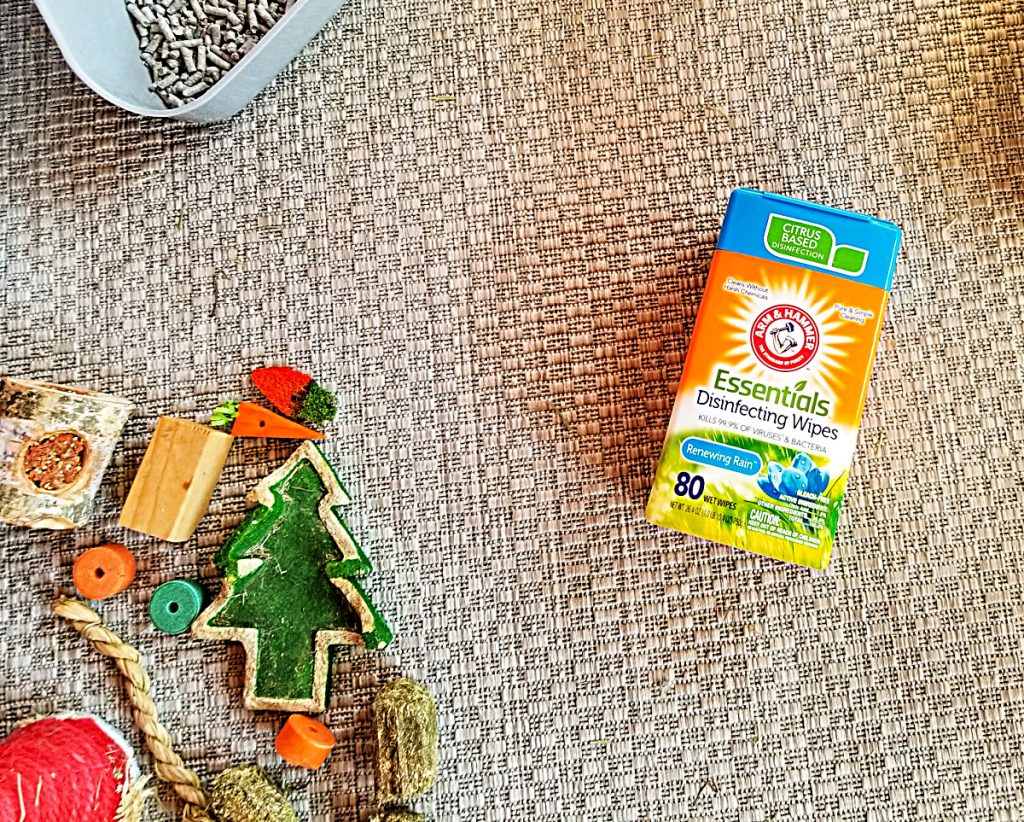 I thank Arm and Hammer Disinfecting Wipes for making a messy job easier. The wipes are a nice, generous size and well soaked. I didn’t feel like I had to go run them under some water to make them work better – they were perfect right out of the tub. 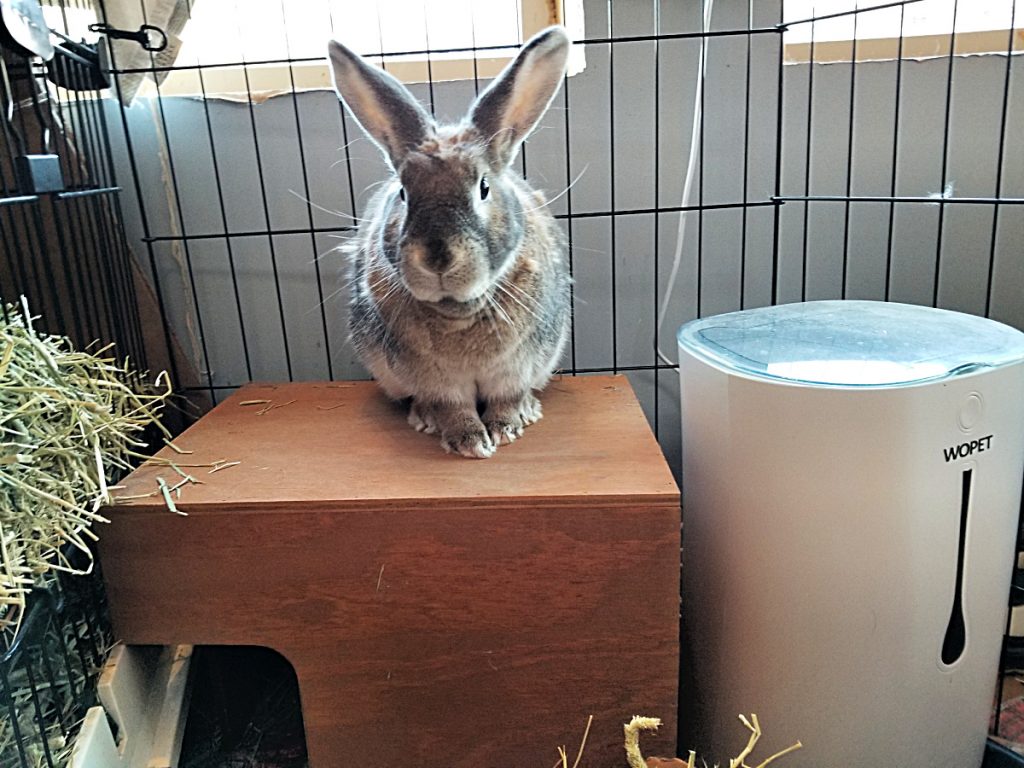 Cappuccino has even come to appreciate his newly cleaned space. He is actually spending more time in it that he had been. Whether that is because he wants to get away from the cats or he is pleased with the change well, I don’t know. But he is in there more than he had been. 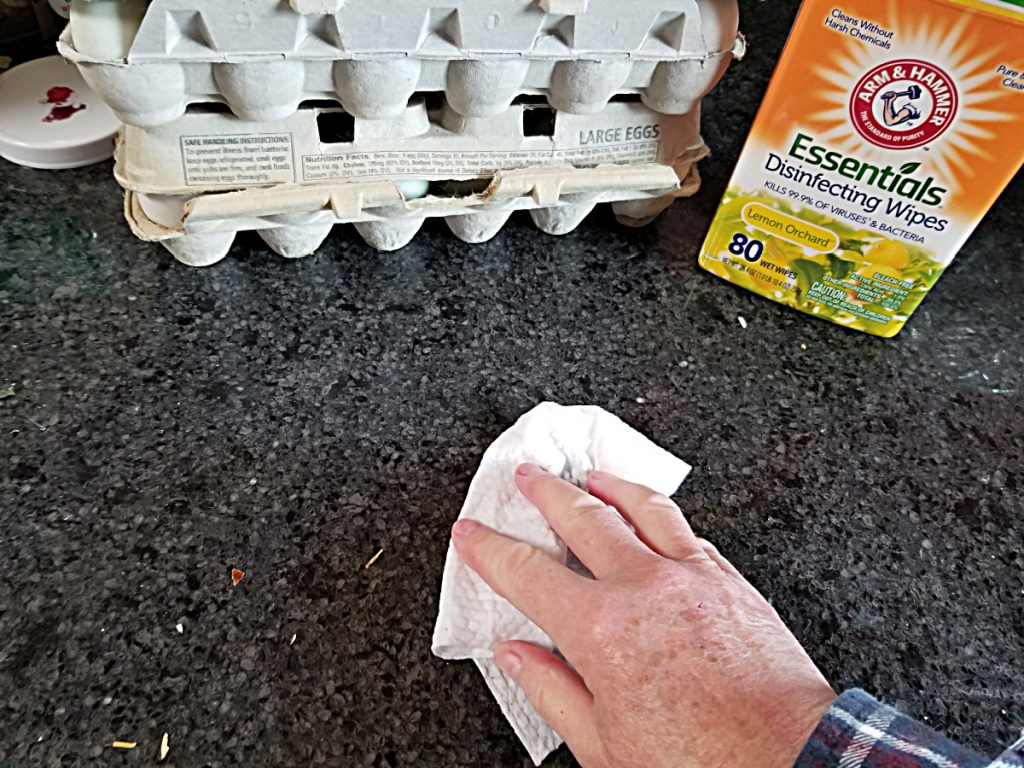 Arm and Hammer Disinfecting Wipes in the Kitchen

Just so I am clear – the Arm and Hammer Disinfecting Wipes have a myriad of uses beyond cleaning your bunny area. I am pretty sure you knew that already! They are particularly useful for cleaning up after egg washing. When I bring the eggs in from the chicken/duck house they are less than clean.

I first put the eggs on the counter, then wash them, box them and into the ‘fridge they go. This does leave the counter a bit messy. The Arm and Hammer Disinfecting Wipes are perfect for cleaning up. I just wipe the counter down to get rid of the mess from the eggs and since it’s a surface where I prepare food I go back over it with clear water.

They are also great for quick cleanups like when the cats throw up (ick, I know but anyone with cats understands) and other like messes. I am very glad to have them on hand.