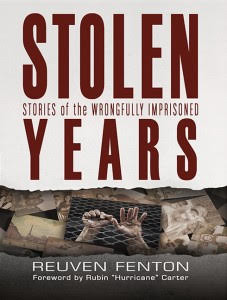 There is a horrible murder in your neighborhood. You stand outside with your neighbors and watch, or maybe you peek out of your curtains. Hours pass, then days, maybe even years. Until one day there is a knock at your door, and the police take you in for questioning. Do you remember what happened? Do you have an alibi? Can you take countless hours of interrogation without breaking? Can this happen to you?

It can happen, and it happens more than you think.

From The Fixer to The Shawshank Redemption to Orange Is the New Black, books, films, and TV shows have, for decades, fed the public’s endless hunger for nitty-gritty details about prison life. Stolen Years will not deny listeners those details, but it will also offer something more satisfying: the stories of ten former inmates who fended off the blackest kind of despair so they could keep fighting for freedom; the years they spent waiting for an appeal; and their struggles to get back to living after losing so many years behind bars.

Intense, startling, and utterly compelling, Stolen Years will take readers into the stories of the ones who didn’t do it.

“In this gripping book, Stolen Years, Reuven Fenton shows us the devastating consequences that arise when one is convicted for a crime he or she did not commit. These stories have happy endings. Sadly, most do not.”—Dr. Rubin “Hurricane” Carter

Reuven Fenton has been covering murder and scandal for the New York Post since 2007. He has earned national recognition for his exclusive reporting on national stories, such as the resignations of political powerhouses Eliot Spitzer and Anthony Weiner; Hurricane Sandy and the devastation
it brought on New York and New Jersey; the shooting at Sandy Hook Elementary School; and

the Boston Marathon bombing. Mr. Fenton was inspired to write Stolen Years after covering an unforgettable court hearing in 2013 in which a Brooklyn judge freed David Ranta, a man who’d been wrongfully convicted twenty-two years earlier of murdering a rabbi. The sensational story sparked an investigation into misconduct by both the Brooklyn District Attorney’s Office and the lead detective in the case. Mr. Fenton is a graduate of Columbia Journalism School and lives in New York City with his wife and two sons. Follow him on Twitter at reuvenfen.

“Go to the precinct.”

Those are all the instructions a reporter at a New York City tabloid needs to hear from an editor to know that he or she has been assigned a perp walk.

A perp walk is when cops walk the accused out of the station house in cuffs and put him in a squad car to take him to court. It’s a quick and chaotic mess. Photographers try not to trip over each other as they attempt to get a decent shot, while the reporters shout questions at the perp from the outer edges of the scrum.

I’ve been assigned perp walks for as long as I’ve been a reporter for the greatest tabloid in the world, the New York Post.

The walks are almost always preceded by hours of waiting, as detectives work the perp over and over in an interrogation room. If it’s a particularly high-profile case—someone collared for pushing some poor guy onto the subway tracks right before the E train barreled past, for instance—then a lot of other reporters and camera people wait with you.

Empty coffee cups pile up at our feet. The wind shifts. Precinct detectives start giving us little nods when they come outside for smoke breaks. Representatives from the NYPD’s public information office show up.

And then it happens.

Flanked by a detective on each side, the perp exits the station and walks down the steps into a tidal wave of flashing lights and reporters belting out questions like, “Why did you do it?”

Usually he keeps his head down and says nothing. But sometimes he looks straight into the throng. I’ve seen a few perps smile, like they’re enjoying their fifteen seconds of fame.

And every once in a while they say a few words: “I didn’t do nothing!”

When it’s all over, the consensus among the reporters and cameramen is, “Yeah, sure you didn’t.”

There’s an assumption when someone gets arrested—especially for something really grim, like murder or child molestation—that the accused is guilty. You look at the person’s mug shot, see those bleary eyes and messed-up hair, and say to yourself, “Guilty.” It’s human intuition.

Often, this intuition is spot-on. Some crimes happen in front of dozens of witnesses, or are caught on surveillance tapes. Sometimes the perpetrator’s fingerprints are all over the crime scene. Sometimes he’s caught with the victim’s blood literally on his hands.

But sometimes there are no witnesses, and no solid evidence to match the accused to the crime. And it eats at you, as you wonder just what if the perp is innocent? Because innocent or not, they all bury their faces in their hands the same way when they hear the jury foreman say, “Guilty.” Nobody, not even a cold-blooded killer, wants to sit in prison for the rest of his life.

On the flip side, stories I’m getting assigned increasingly often these days are about exonerations. It’s a whole event. Reporters pack the courtroom to catch the look on the inmate’s face as the judge tells him, “You are free to go.” And then comes the best part, when he walks to the gallery and tearfully embraces his now-grown children for the first time as a free man.

At the press conference afterward, the delirious exoneree tries to field questions that are impossible to answer in a sound bite.

But I always want to know more. I want to know how awful the prison food was and how tiny the cells were and how much the prison scrubs itched. And how did it feel when his kids stopped visiting and answering his letters? And what was it like trying to rebuild a life from scratch after getting thrust back into a world that had changed so much?

This book is my attempt to answer those questions and many others, through the voices of ten remarkable individuals who’ve been to the worst kind of hell and back. These men and women bared their souls to me and opened my eyes to the horrible plight of the incarcerated innocent.

For nineteen-year-old Cornelius Dupree, the skip from freedom to lockup was so fast, so sudden, so random, that the reality didn’t sink in until he was known as inmate #308310.

The Dallas teen had been walking with a friend to a party when the two were stopped and frisked by police officers looking for suspects in a robbery-rape case. Dupree and his friend were arrested, falsely identified as the perpetrators, charged, jailed, tried, convicted, and finally sentenced to sixty years in prison. From the day he was arrested, Dupree didn’t know freedom for thirty-one years.

Drayton Witt was still mourning the passing of his five-month-old adopted son Steven when cops arrested the Arizona man for shaking the child to death. At trial it didn’t seem to matter that Steven had been in and out of the hospital for seizures since birth. Nor did it matter that the incriminating medical research on shaken baby syndrome was dubious at best. Witt did ten years behind bars.

Debra Brown, a Utah mother of three, took a drive one day to check on her ailing buddy Lael. She found him dead from a gunshot wound to the head and called the cops, hysterical. The ensuing investigation found Brown to be the chief suspect because…well, she and Lael had hung out a lot, she had the key to his house, and she’d swung by the day before she found his body to bring him soup. No actual evidence connected her to the crime. She was locked up for eighteen years.

That’s how these things go sometimes.

I hope you enjoyed this excerpt. You can read reviews of the book if you follow the Stolen Years Tour Schedule.