I will never say no when offered a book by Lucinda Riley. The Storm Sister is one of her Seven Sisters Series and I thank Historical Fiction Virtual Book Tours for sending me a free copy for my honest review. 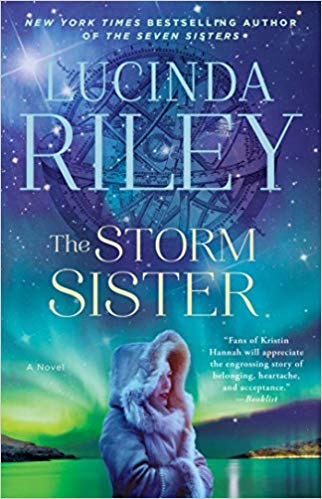 About The Storm Sister:

Gathered at their childhood home to mourn their father’s death, Ally D’Aplièse and her five adoptive sisters receive tantalizing clues to their distinct heritages. Ally soon finds herself in Norway where she begins to make sense of her elusive past in the second part of an epic new series by #1 internationally bestselling author Lucinda Riley.

Olympic hopeful Ally is in the midst of preparations for one of the world’s most challenging yacht races when news of her beloved father’s death shocks the accomplished sailor. Saying goodbye to the love of her life, a man her family knows nothing about, she rushes back to her family home, an enchanting chateau where she and her five sisters—each adopted as infants—were raised on the shores of Lake Geneva.

When new tragedy strikes on the high seas, pummeling Ally yet again with a terrible and unexpected loss, she turns her back on the water and instead follows her own North Star—an intriguing clue left by her father which leads her to Norway and the promise of unmasking her origins. Surrounded by the majestic beauty of an unfamiliar homeland, Ally begins to unpack the century-old story of a remarkable young woman named Anna Landvik, a talented singer with an astonishing link to composer Edvard Grieg and his celebrated musical accompaniment to Henrik Ibsen’s iconic play “Peer Gynt.”

Lucinda Riley was born in Ireland and wrote her first book aged 24. Her novel ‘Hothouse Flower’ (also called ‘The Orchid House’) was selected for the UK’s Richard and Judy Bookclub in 2011 and went on to sell 2 million copies worldwide. She is a multiple New York Times bestselling author and has topped the bestseller charts in four European countries.

In response to demand from her readers, she has recently re-written two books from her early writing career when published under her maiden name Lucinda Edmonds – the books are now being published as ‘The Italian Girl’ and ‘The Angel Tree’.

‘The Seven Sisters’ is the first of a unique seven book series based allegorically on the mythology of the famous star constellation.

Lucinda’s books are translated into 28 languages and published in 38 countries. She lives with her husband and four children on the North Norfolk coast in England and in the South of France.

I did not know this was the second book of a series when I started reading it. I knew it was part of a series but I thought it was the first one. I’ve read several books by Ms. Riley at this point as I enjoy her mix of current and historical story lines. I will admit to enjoying the historical portions more than the modern day ones but I’m sure that doesn’t surprise any of you.

This book focuses on Ally, one of the 6 girls adopted by the mysterious Pa Salt. Not much is really known about him other than he adopted at least 6 girls, he has a heck of a lot of money and he’s dead. Beyond that only snippets are given about the patriarch of the family.  Ally is an experienced sailor – she has been invited to try out for the Swiss Olympic team. But for now she is participating in a race and it’s another sailor that has caught her eye.

Ally is not looking for love yet she finds it with the enigmatic Theo. A racing captain that holds the respect of sailors and boat owners alike. They do a little dance around each other for a while but once they connect the relationship moves along very quickly. In fact, Ally is with Theo when she learns of her father’s passing. He helps her get back to the family home. There she reunites with her sisters and learns of her legacy from her father. He gives each of the girls a clue to their origins and they can decide to pursue it or not.

Ally had never had an interest in learning about her roots but life throws her even more curve balls and she decides to follow the path her father laid before her. She finds more than she ever thought she would.

I definitely enjoyed this book. It kept me interested in the story. As I mentioned above I was more interested in the historical story as opposed to Ally’s tale. The modern interactions were a little too perfect; the relationships were all breezy, happy and perfect. Theo is just hard to believe as a real person – I’m sorry but no one is that perfect. That was one major flaw for me. I also had some issues with the characters’ conversations. In many cases it was horribly stilted and this would be very distracting. But despite these issues I was quite invested in Ally’s search for her roots. I hope to follow the paths of her sisters.