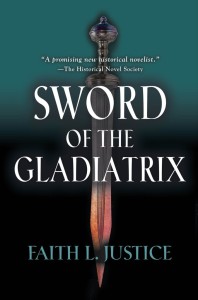 An action-packed tale that exposes the brutal underside of Imperial Rome, Sword of the Gladiatrix brings to life unforgettable characters and exotic settings. From the far edges of the Empire, two women come to battle on the hot sands of the arena in Nero’s Rome: Afra, scout and beast master to the Queen of Kush; and Cinnia, warrior-bard and companion to Queen Boudica of the British Iceni. Enslaved, forced to fight for their lives and the Romans’ pleasure; they seek to replace lost friendship, love, and family in each other’s arms. But the Roman arena offers only two futures: the Gate of Life for the victors or the Gate of Death for the losers.

FAITH L. JUSTICE writes award-winning novels, short stories, and articles in Brooklyn, New York. Her work has appeared in Salon.com, Writer’s Digest, The Copperfield Review, the Circles in the Hair anthology, and many more. She is a frequent contributor to Strange Horizons, Associate Editor for Space and Time Magazine, and co-founded a writer’s workshop many more years ago than she likes to admit. For fun, she digs in the dirt—her garden and various archaeological sites.

I love stories that take place in Ancient Rome. This is a little bit later in Rome’s history than I usually read but it was still fascinating to look at the period through different eyes; those of female gladiators. Apparently there were indeed such fighters as Rome fell into its decline. As the Emperors looked for more exotic entertainments for the arena.

Two women from opposite ends of the Roman Empire end up as slaves of the same man; Afra from Kush and Cinnia from Britain. Their stories are similar in that they were warriors in their home countries until disaster befalls them and now they find themselves owned by a man who wants to use them as entertainment. In their common circumstance they find comfort, friendship and love.

It was truly interesting to visit this time period through the eyes of these characters. They are both strong, unique and well drawn. It’s great to have a book centering around female characters in Ancient times. Yes, it is also their love story but it is not overly graphic. I was fascinated to learn in the author’s note that female gladiators were a part of this time. The book is well researched and easy to read.

You can follow the Sword of the Gladiatrix Tour Schedule

One lucky US reader will win a copy of Sword of the Gladiatrix. Just enter as many ways as you’d like on the Gleam widget below. Good luck everyone.

Sword of the Gladiatrix