I was intrigued the first time I read the synopsis for The Talented Ribkins by Ladee Hubbard. It’s a book like I haven’t read in a very long time. It’s on tour with TLC Book Tours and I was sent a copy at no charge for my honest review. 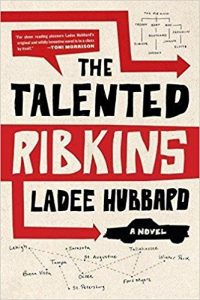 About The Talented Ribkins:

At seventy-two, Johnny Ribkins shouldn’t have such problems: He’s got one week to come up with the money he stole from his mobster boss or it’s curtains for Johnny.

What may or may not be useful to Johnny as he flees is that he comes from an African-American family that has been gifted with super powers that are rather sad, but superpowers nonetheless. For example, Johnny’s father could see colors no one else could see. His brother could scale perfectly flat walls. His cousin belches fire. And Johnny himself can make precise maps of any space you name, whether he’s been there or not.

In the old days, the Ribkins family tried to apply their gifts to the civil rights effort, calling themselves The Justice Committee. But when their, eh, superpowers proved insufficient, the group fell apart. Out of frustration Johnny and his brother used their talents to stage a series of burglaries, each more daring than the last.

Fast forward a couple decades and Johnny’s on a race against the clock to dig up loot he’s stashed all over Florida. His brother is gone, but he has an unexpected sidekick: his brother’s daughter, Eloise, who has a special superpower of her own.

Inspired by W.E.B. Du Bois’s famous essay “The Talented Tenth” and fueled by Ladee Hubbard’s marvelously original imagination, The Talented Ribkins is a big-hearted debut novel about race, class, politics, and the unique gifts that, while they may cause some problems from time to time, bind a family together.

Laddee Hubbard is the winner of the 2016 Rona Jaffe Foundation Writer’s Award and the William Faulkner-William Wisdom Creative Writing Competition for the Short Story. She holds a BA from Princeton University, an MFA in Dramatic Writing from New York University, an MFA in Creative Writing from the University of Wisconsin, and a PhD from the University of California, Los Angeles. She lives in New Orleans, Louisiana. The Talented Ribkins is her first novel.

What a fantastic book. I will admit right up front that I think I need to read it at least once more to fully understand it and I believe it deserves a second reading because there is so much going on. It’s one of those books where you focus in one are and totally miss some fine points in another. It’s written on several levels and can be read as a simple tale of an uncle finding himself while on a forced trip in the search for money to pay someone back. Or it’s allegory for the Civil Rights battle that sadly is still being fought in this country. Actually it’s both and when the two come together  magic happens.

As any of you who read my reviews regularly know, I don’t go in for books that happen over my head because I am the first to admit I’m not smart enough for them. This book does that to some degree but I had serious glimpses of what was going on up there so I am sure the second (or third) reading will bring me to a full understanding. Even if I never get there this is a delightful book full of some of the quirkiest characters I have had the pleasure to meet on paper in a long, long time.

The Ribkins are all born with a unique talent – it’s always something otherworldly and it’s something that sets them apart. Johnny Ribkins can make maps without ever being  there. His brother could scale buildings. Johnny has a small problem – while working for a rather shady individual he appropriated some money and now his boss wants that money back. He sets off to get it in various places he’s got it buried. One of them being his brother’s house – his dead brother. While there he learns that he has a niece that he did not know existed. A series of circumstances leads to her joining Johnny as he seeks his buried money.

What follows is a journey of discovery for Johnny, his niece Eloise, and the reader. Johnny’s travels take him to family, friend’s and enemies and as he gathers his assets he learns that the past is maybe not what he thought it was and the future can be much more than he thought it was going to be.

I had the world’s hardest time putting this book down and I truly wanted to turn around and start it right over again. That hasn’t happened in quite some time for me. All of these characters are a true delight and I wanted to continue on with them. I want to know more. Is that not the joy of reading? This book is very different. You have to let go of what is real in some cases and just accept the story. Just do it and you will be rewarded with a remarkable tale that is both quirky and very deep.