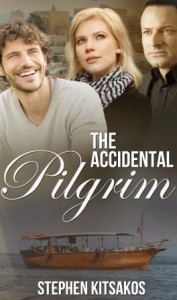 In the summer of 1974, Dr. Rose Strongin, a marine biologist, inexplicably disappears for three hours on the last day of an archaeological dig at the Sea of Galilee. She has no memory of the disappearance, but it causes her to miss her flight home from Israel. That plane, TWA 841, explodes over the Mediterranean killing all aboard. Twelve years later she learns that a 2,000 year-old perfectly preserved vessel, dubbed the “Jesus Boat,” is uncovered at the site of her disappearance and she begins to understand what happened and why.

The novel crosses several decades exploring the intersection of science, religion and the unexplainable as a family gathers to say goodbye to the matriarch who held a family secret.

Stephen Kitsakos is a theatre writer and journalist as well as the author of three opera librettos. His current project is the opera adaptation of Khaled Hosseini’s international bestseller, A Thousand Splendid Suns with music by Sheila Silver. Other works include the Sackler-Prize award winning “The Wooden Sword” and “The White Rooster: A Tale of Compassion” for the Smithsonian Institution. His work often explores the connection between religion and art. He divides his time between Key West and New York.

This book intrigued for its mix of science, religion, mystery and what might be. It started with a trip to Israel to fulfill the final wishes of Rose Strongin, a scientist, a marine biologist, who was working at the Sea of Galilee in 1974 when she was late back and it caused her to miss her flight which turned out to be fortuitous as that plane explodes and all are killed. Rose never explains why she was late and it causes issues in her life and her marriage.

The family that comes together in the present to lay Rose to rest are a mixed bunch; Nathan, the baby is resentful of his father feeling that he knows all that there is to know about his parents marriage and his father is wrong. The two girls have their roles and are more aware of the frailties of both of their parents. All of these feelings come to the fore as they all are together for the first time in quite a while to put their mother to rest.

The reader gets to know Rose through a serious of flashbacks in and out of different periods of her past. She is a fascinating well developed character and I loved her struggle with science and otherworldliness (is that a word?) The other characters in the book are equally as well developed. Mr. Kitsakos is also very good at bringing a place to life and setting a mood. This is not a simple book; it will leave you thinking for days after you finish it. Thinking about life, love and death.