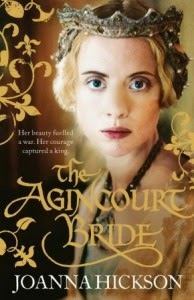 About the Book:
• Paperback: 592 pages
• Publisher: Harper 360 (August 19, 2014)
Her beauty fuelled a war.
Her courage captured a king.
Her passion would launch the Tudor dynasty.
When her own first child is tragically still-born, the young Mette is pressed into service as a wet-nurse at the court of the mad king, Charles VI of France. Her young charge is the princess, Catherine de Valois, caught up in the turbulence and chaos of life at court.
Mette and the child forge a bond, one that transcends Mette’s lowly position.
But as Catherine approaches womanhood, her unique position seals her fate as a pawn between two powerful dynasties. Her brother, The Dauphin and the dark and sinister, Duke of Burgundy will both use Catherine to further the cause of France.
Catherine is powerless to stop them, but with the French defeat at the Battle of Agincourt, the tables turn and suddenly her currency has never been higher. But can Mette protect Catherine from forces at court who seek to harm her or will her loyalty to Catherine place her in even greater danger?
About the Author:
Joanna spent twenty-five years at the BBC writing and presenting for radio and television. Gripped by Shakespeare’s historical plays, Joanna began researching the King Henry V’s ‘fair Kate’ as a schoolgirl and the story of Catherine de Valois and the Tudor genesis has remained with her throughout life. She lives in an old farmhouse in Wiltshire and is married with a large family and a wayward Irish terrier.
Follow Joanna on Twitter and connect with her on Facebook.
My Opinion:
I knew a little about Catherine de Valois prior to reading this book but not as much as I know other famous women in history which is a bit surprising given that she is the matriarch of the Tudor dynasty. This novel is told from the point of view of her nursemaid, Guillamette. The tale starts with Catherine as an infant and it progresses until just after her marriage to Henry V. (I don’t think I’ve giving anything away here as the history is well recorded.)
The story focuses on Catherine but also on Gullamette, called Mette and her family. This I found interesting because it showed the differences between the classes. France was not exactly well governed with Charles VI  – modern historians are not sure what his brain disorder was but whatever it was it certainly passed to Henry VI in England through Catherine.
I enjoyed reading this tale of a girl’s change from child to strong young woman. It was a time when women had little power and control over their own lives – even women of wealth. Catherine was little more than a pawn for her mother then her brother to play as they tried to negotiate with Henry V of England. Catherine and Mette were well developed characters as were Mette’s children. Some others were more caricatures – Queen Isabelle for example seemed to be a one note character and with the lack of an author’s note I had to go a’googling and much of what I found disagreed with the portrayal in the book. I respect the fiction part of historical fiction but I also welcome a note at the end of a story to help me parse that fiction from fact.
The Agincourt Bride was an easy read – I don’t think it took me much more than a day and a half. I had the benefit (?) of a power outage which gave me many hours of uninterrupted reading time. I did find myself lost in the story and not wanting to put it down to cook dinner. It did keep me enthralled despite some undeveloped characters and somewhat of a misnomer if you ask me on the title – Agincourt barely appears in the book and Catherine doesn’t marry Henry V until several years after that decisive battle.
I am very much looking forward to the next chapter (and book) in Catherine’s life as told by Ms. Hickson – The Tudor Bride.
Rating:
4
You can follow The Agincourt Bride Tour Schedule
You can purchase The Agincourt Bride on Amazon.com

The Typewriter Girl by Alison Atlee is Now Available in Audiobook! Book Blast and Giveaway
Making Healthy Choices is Vital in Working Towards My Health Goals #BalanceRewards #shop