Joshilyn Jackson is a new author to me. As I try to expand my reading with more contemporary fiction her new book, The Almost Sisters sounded intriguing. I thank TLC Book Tours for sending me a copy at no charge for my honest review. 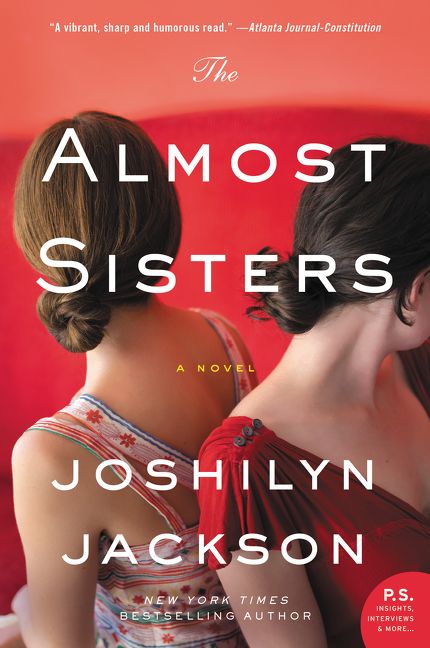 About The Almost Sisters:

With empathy, grace, humor, and piercing insight, the author of gods in Alabama pens a powerful, emotionally resonant novel of the South that confronts the truth about privilege, family, and the distinctions between perception and reality–the stories we tell ourselves about our origins and who we really are.

Superheroes have always been Leia Birch Briggs’ weakness. One tequila-soaked night at a comics convention, the usually level-headed graphic novelist is swept off her barstool by a handsome and anonymous Batman.

It turns out the caped crusader has left her with more than just a nice, fuzzy memory. She’s having a baby boy—an unexpected but not unhappy development in the thirty-eight year-old’s life. But before Leia can break the news of her impending single-motherhood (including the fact that her baby is biracial) to her conventional, Southern family, her step-sister Rachel’s marriage implodes. Worse, she learns her beloved ninety-year-old grandmother, Birchie, is losing her mind, and she’s been hiding her dementia with the help of Wattie, her best friend since girlhood.

Leia returns to Alabama to put her grandmother’s affairs in order, clean out the big Victorian that has been in the Birch family for generations, and tell her family that she’s pregnant. Yet just when Leia thinks she’s got it all under control, she learns that illness is not the only thing Birchie’s been hiding. Tucked in the attic is a dangerous secret with roots that reach all the way back to the Civil War. Its exposure threatens the family’s freedom and future, and it will change everything about how Leia sees herself and her sister, her son and his missing father, and the world she thinks she knows.

You can purchase The Almost Sisters at Harper Collins

Joshilyn Jackson is the New York Times bestselling author of seven novels, including gods in Alabama and A Grown-Up Kind of Pretty. Her books have been translated into a dozen languages. A former actor, Jackson is also an award-winning audiobook narrator. She lives in Decatur, Georgia, with her husband and their two children.

This book opens with a woman having a one night stand with a man she doesn’t know and he’s wearing a mask. This is not behaviour anyone should endorse. It’s one of the many issues that this book tackles as the main protagonist, Leia tries to deal with the outfall of that night and with her ailing grandmother.

It is no spoiler to share that Leia finds herself pregnant from her ill advised decision as the synopsis on the back of the book lets that bit of news out to the reading public. Nor does it keep secret that Leia’s baby is going to biracial. This opens up further discussion which is particularly of interest in this time we now find ourselves living in – in real life as forces have found themselves more emboldened to speak out in support of so called “white supremacy.” Plus Leia is from the South where racial issues are particularly challenging – at least historically if certainly not currently.

Just as Leia finds out that she is pregnant she learns that her “perfect” sister is experiencing marital problems and that her grandmother – a grande dame of the town where Leia grew up – is having some manner of serious health problem. It’s a lot for her to have to deal with – plus she has her young niece along for the ride as she tries to give her sister some space to deal with the fallout from her husband’s betrayals. A husband that used to be Leia’s love.

You can see why all of these interwoven issues would make for good reading. I’ve not read anything by Ms. Jackson before so I didn’t know what to expect. What I found was a truly readable novel full of quirky and interesting characters – OK, some of them were a touch over the top at times but if you’ve ever lived in a small town you know that these kinds of people really do exist.

I enjoyed the complications in this book. The small town life. One of the big family secrets at the center was a bit odd to me and didn’t really add up but I am going to just let it slide because I enjoyed the book otherwise as a whole. It was an act that for some reason didn’t ring true – but perhaps I’m just missing something. The relationships are really what drives this book and they do ring true, like the bells at each of the churches in the tale. (OK – I don’t know for sure that they bells but it made for a good metaphor.)

This is a messy book full of all manner of human emotions; love, lust, hate, and forgiveness among others. That is what made it such an engaging read for me. It tackles some big issues and makes you think.