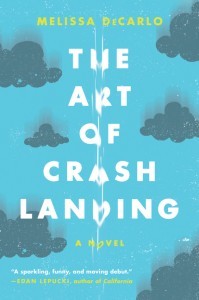 Broke and knocked up, Mattie Wallace has got all her worldly possessions crammed into six giant trash bags and nowhere to go. Try as she might, she really is turning into her late mother, a broken alcoholic who never met a bad choice she didn’t make.

When Mattie gets news of a possible inheritance left by a grandmother she’s never met, she jumps at this one last chance to turn things around. Leaving the Florida Panhandle, she drives eight hundred miles to her mother’s birthplace—the tiny town of Gandy, Oklahoma. There, she soon learns that her mother remains a local mystery—a happy, talented teenager who inexplicably skipped town thirty-five years ago with nothing but the clothes on her back. But the girl they describe bears little resemblance to the damaged woman Mattie knew, and before long it becomes clear that something terrible happened to her mother. The deeper Mattie digs for answers, the more precarious her situation becomes. Giving up, however, isn’t an option. Uncovering what started her mother’s downward spiral might be the only way to stop her own.

Melissa DeCarlo was born and raised in Oklahoma City, and has worked as an artist, graphic designer, grant writer, and even (back when computers were the size of refrigerators) a computer programmer. The Art of Crash Landing is her first novel. Melissa now lives in East Texas with her husband and a motley crew of rescue animals.

I don’t know where to go with this book. I think I’m just too old for it. I’ve come across others like it, with similar types of plots and protagonists of the same ilk. I believe my problem lies in coming from a generation that doesn’t understand the mindset of the story teller.

In this tale Mattie Wallace just kind of meanders through life without any purpose at all. Her upbringing was less than ideal and her current state of affairs is about as bad as it can be; she’s unmarried, pregnant, homeless and broke. Instead of trying to deal with any one of her problems she does what she always does – she runs away. She runs into more problems and yet still instead of trying to help herself she decides that she needs to figure out her dead mother’s problems instead.

Mattie is impossible to like. It’s hard for me to stay involved and connected to a book with a main character so selfish and uncaring. She has maybe two moments in the book when she thinks of someone other than herself and it’s just hard to root for her. The only thing that kept me reading was the way Ms. DeCarlo spun her story. Her writing is worth reading but her protagonist needs to grow up.