The Banker and the Blackfoot by J. Edward Chamberlin – Book Review

Looking at the past is one of my passions – my degree is in European history. I will readily admit to a lack of study in North American history, particularly anything after the American Revolution. Therefore I was pleased to accept a copy of The Banker and the Blackfoot by J. Edward Chamberlin at no charge for my honest review. 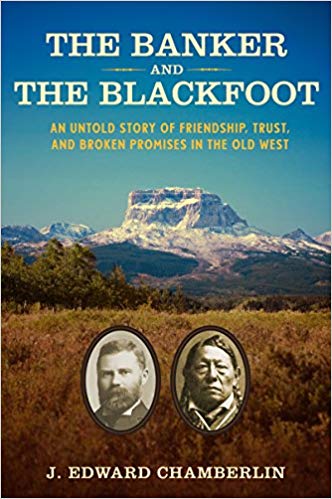 About The Banker and the Blackfoot:

During the last decades of the nineteenth century in the Old West, cowboys and Indians, lawmen and outlaws, ranchers and farmers shared the border between Canada and the United States―and mostly ignored it. American traders and cowboys with their cattle came north to the territory that later became Alberta, and the Blackfoot traveled south to Montana to visit their kinfolk there. Bull trains regularly carried supplies from Fort Benton, on the Missouri River, across the border to Fort Macleod, a small ramshackle town in the foothills of the Rockies.

The Banker and the Blackfoot conjures up vividly the never-before-told story of Fort Macleod, the surrounding Blackfoot territory, and the foothills during roughly two decades, 1885 to 1905, when the people living there―First Nations and Métis, rancher and farmer―respectfully set out to accommodate Blackfoot sovereignty and new settlement―before the Canadian government broke its Treaty promises to the Indians. There were many friendships in this time and place, both among town residents and foothills settlers and the police, and between many of them and the Blackfoot. It was here that the self-made banker John Cowdry―J. Edward Chamberlin’s grandfather―met Crop Eared Wolf, the legendary Blackfoot warrior and brilliant horseman, and their friendship and trust formed a lasting bond. Cowdry later became the town’s first mayor, and Crop Eared Wolf succeeded his father, the great statesman Red Crow, as head chief of the Blood tribe.

Fort Macleod embraced it all―Sun Dances and social dances, bibles and medicine bundles, drums and piano recitals, horse races and polo matches, and rodeos to celebrate both the horse culture of the Blackfoot and the skills of the cattle range. The town was full of great characters, including Madame Kanouse (Natawista), admired for both her influential intelligence and her stunning fashion sense; Kamoose Taylor, hospitable patron of the Macleod Hotel―where Francis Dickens, son of the great novelist Charles Dickens, and the Sundance Kid himself were found at the bar; Colonel James Macleod, commander of the North-West Mounted Police; the taciturn Jerry Potts, unequaled Métis guide and interpreter; John Ware, a successful black cowboy and rancher; and the renowned Peigan chief Big Swan.

Full of wisdom, passion, and insight, The Banker and the Blackfoot compellingly portrays a time when many people in that part of the Old West looked for ways of getting along with each other and getting on with the things that mattered to them all. Their remarkable story offers hope for all of us today.

J. Edward Chamberlin is professor emeritus of English and Comparative Literature at the University of Toronto, a Fellow of the Royal Society of Canada, and an Officer of the Order of Canada. He was Senior Research Associate with the Royal Commission on Aboriginal Peoples in Canada, and has worked extensively on indigenous land claims in Canada, the United States, South Africa, and Australia. His books include If This Is Your Land, Where Are Your Stories? Finding Common Ground; Horse: How the Horse Has Shaped Civilizations; and Island: How Islands Transform the World. He lives near Vancouver.

This is a non fiction book so I will admit upfront that I did not read it straight through. I picked it up and read it here and there in between other books. Since moving to Montana I have found an interest in learning more about the history of the Western migration and the truth of how it happened. Some I have learned by reading historical fiction that has lead me to further research online and some I have learned with interesting books like this.

If I know little about American history, I know next to nothing about Canada’s history. The Banker and the Blackfoot offers a peak into a tiny piece of the shared history of the two countries. Trading was a vital part of growth throughout the West and the various forts that dotted the landscape were the conduits for that trade and information.

This book is more a tale of Canada than the US but it is still a cross border story involving the Blackfoot tribe. I am not going to do a better job recounting the subject matter than the official synopsis so I will just refer you back to it. Fort McCleod was not familiar to me which of course rolls back to my abysmal track record on Canadian history. Fort Benton on the American side is in Montana and while I have not visited I’ve driven by – these two installations form the pivot points of the book.

The people populating the tale are quite an intriguing bunch; sometimes as they say, truth is stranger than fiction. It was a rough and wild time and so therefore there are some rough and wild folk who populated the area. But there were also plain, hardworking people. As we all know with the hindsight that comes from looking back, there were a lot of people who were out to just make a lot of money and who set out to steal what they could from the people of the First Nations.

This story does offer a small slice of time when people of different colors and cultures actually managed to get along. It didn’t last but there was glimmer of possibility. And of hope.

I found myself a little confused in the beginning (I did read the first 4 chapters all at once) until I figured out who was who but once I did it was much easier to maintain interest. It was a very interesting period in the West’s history, not to mention a contentious one. Neither country – the US or Canada – treated the Native Americans/First Peoples with any kind of respect. In fact, as we all know they were treated as badly as a people could be treated.

The Banker and the Blackfoot is an interesting look into a pivotal period in the history of the North American West. Full of the kind of characters you would expect from the time it shows that some tried to do what was right even when most were out for themselves.