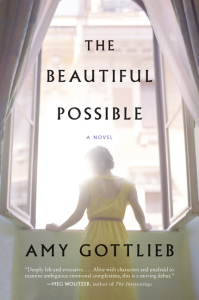 “I’ve never read anything quite like this lyrical and infinitely wise novel. . . . If books could shimmer, this one would.”—Elizabeth Berg, author of The Dream Lover

Spanning seventy years and several continents, this enthralling novel tells the braided love story of three unforgettable characters. In 1946, Walter Westhaus, a German-Jewish refugee who spent the war years at Tagore’s ashram in India, arrives at the Jewish Theological Seminary in New York City, where he meets Sol Kerem, a promising rabbinical student. A brilliant nonbeliever, Walter is the perfect foil for Sol’s spiritual questions . . . and an alluring paramour for Sol’s free-spirited fiancée, Rosalie. Months later they shatter their impossible bond, retreating to opposite sides of the country—Walter to pursue an academic career in Berkeley, and Sol and Rosalie to lead a congregation in suburban New York. A chance meeting years later reconnects them—catching three hearts and minds in a complex web of desire, heartbreak, and redemption. With extraordinary empathy and virtuosic skill, The Beautiful Possible considers the hidden boundaries of marriage and faith, and the mysterious ways we negotiate our desires.

Amy Gottlieb’s fiction and poetry have been published in many literary journals and anthologies, and she is the recipient of fellowships from the Bronx Council on the Arts and the Drisha Institute for Jewish Education. She lives in New York City.

This book starts in Germany during Hitler’s rise with a young man named Walter, his fiancee Sonia and his father all living in an apartment. Walter and Sonia are making plans to leave and go to Palestine as it’s not really an ideal place for Jews. Plans are just coming together when Walter’s father and Sonia are killed and Walter finds himself alone. He leaves intending to follow the plan but he ends up in India instead of Palestine. He follows a man in a felt hat off of the boat and his life changes its course.

In New York Rosalie and Sol are engaged to be married. Sol is finishing his schooling to be a Rabbi and Rosalie is looking forward to being a wife and mother. Into this peaceful existence comes Walter who is brought to the Seminary to study by the man in the felt hat who studies religions and wants Walter to be his protege.  Walter befriends both Sol and Rosalie. First Sol as they study together and challenge each other. Then Rosalie and she finds so very different from Sol. She soon finds herself falling in love with Walter and he with her. What she doesn’t know is that Sol also loves Walter.

Sol and Rosalie marry and start having children but all is not as they dreamed. Sol is a rabbi but he is not fulfilled by his calling. Rosalie is a wife and mother but she is not fulfilled by this life she always thought she wanted. Both long for the excitement that Walter brought into their lives. He does pass in and out but he doesn’t stay long.

I’m making it all sound so mundane and ordinary but it’s not. The book is full of life and love and complications. It’s got heartache, joy and the minutia of everyday life. People live, they love and they die and it’s messy and real. The writing is magical and full of bits of Jewish mysticism and lessons from the Torah. What I loved most was how real the book was. The only weakness at all in the writing of Sol and Rosalie’s sons. They were underdeveloped and seemed there just so that they could have children. But beyond that minor complaint I truly enjoyed this book – another one that stretched my reading boundaries this year.