I received a free copy of The Best of Daughters from TLC Book Tours for my honest review. I received no compensation for this post. 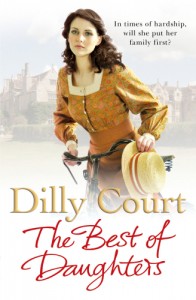 Arrow (Dec. 17, 2012)
480 pages
Despite her privileged upbringing, Daisy Lennox has always longed to make something of her life.
She is drawn to the suffragette movement, but when her father faces ruin they are forced to move to the country and Daisy’s first duty is to her family.
Here she becomes engaged to her childhood friend – a union both families have dreamed of.
But, on the eve of their wedding, war is declared, and Daisy knows her life will never be the same again…

Dilly Court grew up in North-east London and began her career in television, writing scripts for commercials. She is married with two grown-up children and four grandchildren, and now lives in Dorset on the beautiful Jurassic Coast with her husband.
Dilly is a Sunday Times Top Ten bestselling author in the UK, where she has sold over a million books to date. Her books have this year been released for the first time as ebooks in the United States. Print and e-editions are available in Canada and Australia.

It’s always a delight to be introduced to a new author and then to fall in love with the way that author writes. I knew nothing about Dilly Court before I accepted two of her novels for review but I now know that if any more come my way I won’t be able to say yes fast enough. I had sworn off WWI and WWII novels for a bit –  having read too many of them in a row – but I was sufficiently intrigued by the synopses to want to read The Best of Daughters.  Hooray for breaking promises to oneself.

In this book the reader meets Daisy Lennox, a young woman who is fighting with the suffragettes because she feels that there is more to her life as a woman than just being a wife and mother. If her parents find out though, she knows she will be in more trouble than she has ever known. They want her to marry her childhood friend and settle down.

As Daisy struggles to find herself, she learns that her father’s partner has absconded with all of the firm’s money and the family is forced to give up its upper class lifestyle and move to the country. Daisy’s mother struggles with the comedown and thinks the ONLY way out is for Daisy to marry money and to do it quickly. Daisy does get engaged but it’s not for love and then the world goes upside down as WWI begins.

What follows is a story of love, sacrifice, loss and great learning for Daisy and her family. Ms. Court has a writing style that makes it very hard to put the book down once you start – I again find myself aggravated that I am reading this book at a time when I cannot just sit and READ! I was so very involved in the lives of the Lennox family and of Daisy’s fellow nurses. It was one of those books where I was shaking my head when I came out of reading because the return to reality was both a disappointment and a bit of a shock. The Best of Daughters is not overly complicated, the writing is not flowery. The character development is exceptional and I’m very glad that I have a new favorite author.

You can see the Dilly Court Tour Schedule

You can read excerpts of both books:

The Best of Daughters
The Lady’s Maid

BE SURE TO COME BACK WEDNESDAY, SEPTEMBER, 25, 2013 WHEN I WILL REVIEW THE LADY’S MAID BY DILLY COURT!

Disclosure:  I received a free copy of The Best of Daughters from TLC Book Tours for my honest review. I received no compensation for this post.