The Book of Summers by Emylia Hall – Book Review 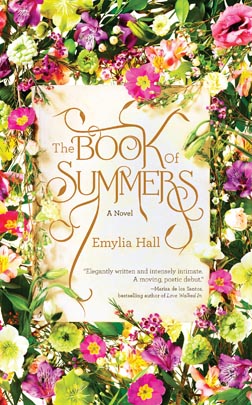 
For nine-year-old Beth Lowe, it should have been a magical summer—sun-kissed days lounging in rickety deck chairs, nights gathered around the fire. But what begins as an innocent vacation to Hungary ends with the devastating separation of her parents. Beth and her father return home alone, leaving her mother, Marika, behind.Over the next seven summers, Beth walks a tightrope between worlds, fleeing her quiet home and distant father to bask in the intoxicating Hungarian countryside with Marika. It is during these enthralling summers that Beth comes to life and learns to love. But at sixteen, she uncovers a life-shattering secret, bringing her sacred summers with Marika abruptly to an end.Now, years later, Beth receives a package containing a scrapbook, a haunting record of a time long forgotten. Suddenly, she is swept back to the world she left behind, forced to confront the betrayal that destroyed her—and to search her heart for forgiveness.


Emylia Hall was born in 1978 and grew up in the Devon countryside, the daughter of an English artist and a Hungarian quilt-maker. After studying at York University and in Lausanne, Switzerland, Emylia spent five years working in a London ad agency, before moving to the French Alps. It was there that she began to write. Emylia now lives in Bristol with her husband, also an author. Chosen by ELLE as one of the most anticipated debut novelists for 2012, Emylia was also one of three writers to appear in the Red Pages Hot 100. THE BOOK OF SUMMERS is her first novel, and is inspired by evocative memories of childhood holidays spent in rural Hungary.


This book is magical, sad, tragic and redemptive all wrapped up in a love story to Hungary. A country about which, I must admit, I know very little. As the tale begins we meet Beth Lowe, a somewhat constrained and shall I say it, boring, young English woman with a very poor relationship with her father. He is coming to visit and the reader can tell she is oh so hopeful for more between them. But he comes not to see her but to deliver a package from Hungary – a package full of memories Beth would rather not revisit.


I fell into this book and could not put it down. The writing! The writing! It is magical – it drew me in and wouldn’t let me go. I felt the sun. I was refreshed by a dip in a pool deep in the forest. I fell in love with a country I know nothing about. Such is the power of Ms. Hall’s pen. As to the story – she had me raving at characters, crying at passages and rejoicing at conclusions that were still very uncertain. I can’t say I agree with or understand the actions of her protagonist – it’s a lot of anger to hold for a very long time – but I can’t say that I didn’t enjoy the journey.


I’m keeping this one for it is one that deserves another read or two. I know that I’ll find nuances I missed on my first read through that will enhance the story and it’s one of those tales that will read better with foreknowledge of the ending. This will be one of my top ten for the year.


You can purchase The Book of Summers on Amazon.com
You can visit Emylia Hall’s website


Disclosure:  I received a copy of The Book of Summers gratis from the publisher. Any opinions expressed are my honest opinions and were not impacted by my receipt of the free book. I received no monetary compensation for this post.