I have read several books by Alyssa Palombo so when I was offered the opportunity to review her latest novel, The Borgia Confessions I was very happy to accept a copy at no charge for my honest review. 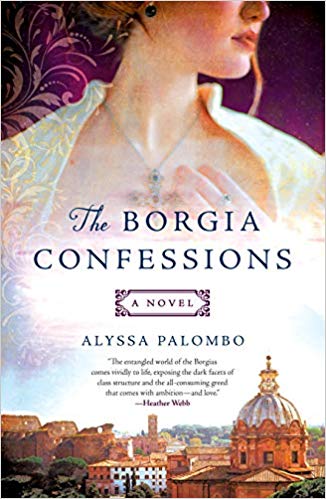 About The Borgia Confessions:

During the sweltering Roman summer of 1492, Rodrigo Borgia has risen to power as pope. Rodrigo’s eldest son Cesare, forced to follow his father into the church and newly made the Archbishop of Valencia, chafes at his ecclesiastical role and fumes with jealousy and resentment at the way that his foolish brother has been chosen for the military greatness he desired.

Maddalena Moretti comes from the countryside, where she has seen how the whims of powerful men wreak havoc on the lives of ordinary people. But now, employed as a servant in the Vatican Palace, she cannot help but be entranced by Cesare Borgia’s handsome face and manner and finds her faith and conviction crumbling in her want of him.

As war rages and shifting alliances challenge the pope’s authority, Maddalena and Cesare’s lives grow inexplicably entwined. Maddalena becomes a keeper of dangerous Borgia secrets, and must decide if she is willing to be a pawn in the power games of the man she loves. And as jealousy and betrayal threaten to tear apart the Borgia family from within, Cesare is forced to reckon with his seemingly limitless ambition.

Alyssa Palombo’s captivating new novel, The Borgia Confessions, is a story of passion, politics, and class, set against the rise and fall of one of Italy’s most infamous families–the Borgias.

ALYSSA PALOMBO is the author of The Violinist of Venice, The Most Beautiful Woman in Florence, and The Spellbook of Katrina Van Tassel. She is a graduate of Canisius College with degrees in English and creative writing, respectively. A passionate music lover, she is a classically trained musician as well as a big fan of heavy metal. When not writing, she can be found reading, hanging out with her friends (and her dog!), or traveling. She lives in Buffalo, New York, where she is always at work on a new novel.

Anyone that reads a fair amount of historical fiction (ah-hem) has more than likely bumped into a tale about the Borgias. History has not been kind to them and as per usual the truth is most likely somewhere between the extremes of the rumors and the glowing tales the Borgias told. In this new novel from Alyssa Palombo the lives of the Borgias are explored in a well researched and very well written tale.

Pope Alexander VI (Rodrigo Borgia) has been elected Pope and he feels he is now at the pinicle of power. Now he sets about securing his legacy through his children for this esteemed priest didn’t exactly follow the rules regarding celibacy. He has arranged for his son Cesare to follow him into the church, his other son Juan will cement relationships with Spain and his precious daught Lucrezia will marry to settle a debt from his election. For what good are children if not to be useful to their father. But while Juan and Lucrezia bow to their father’s will Cesare feels he is wasted in the Church. He longs to lead an army.

While the book deals with all four Borgias it’s really Cesare’s story. He was a man of power and charisma. There is some indication that Machiavelli’s The Prince was modelled on his life.

This book is the kind of detailed, engrossing tale that I love to get lost in. It grabbed me and I found myself immersed in Vatican politics and the lives of the people surrounding the schemers living in Rome. It was a turbulant time as Italy was not a united country but rather a series of city states. Cesare wanted to unite them so as to have a stronger defense against her enemies but without a strong leader it was not going to happen and he was stuck in the church. He feels his father is wasting his talents. The Pope has plans for Cesare to follow after him as Pope and continue the Borgia rule but Cesare feels contrained in his role.

I devoured this book over the course of two days. It is a book of substance so it isn’t really one that I could read in one day. It was full of great characters – both those based in real life and the fictional ones added for effect. The little details that come from all of the research really bring you into time and place. This is a great book for any one who loves history, strong characters and a really good story. Ms. Palombo takes you on a thoroughly exciting trip to Renaissance Italy.