A new book can take you anywhere in the world and in any time period. So where will The California Wife by Kristen Harnisch take the reader? Read on below to find out. I received my copy at no charge but as always my opinions are my own. 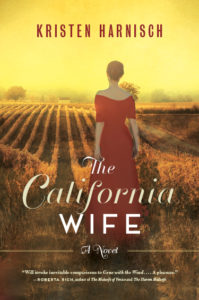 In the sweeping, poignant sequel to The Vintner’s Daughter, the Lemieux family’s ambition to establish an American winemaking dynasty takes Sara and Philippe from pastoral Napa to the Paris World’s Fair and into the colorful heart of early 20th-century San Francisco.

It is 1897, and Sara and Philippe Lemieux, newly married and full of hope for the future, are determined to make Eagle’s Run, their Napa vineyard, into a world-renowned winemaking operation. But the swift arrival of the 20th century brings a host of obstacles they never dreamed of: price wars and the twin threats of phylloxera and Prohibition endanger the success of their business, and the fiercely independent Sara is reluctant to leave the fields behind for the new and strange role of wife and mother.

An invitation to the World’s Fair in 1900 comes just in time to revive the vineyard’s prospects, and amid the jewel-colored wonders of Belle Époque Paris, Sara and Philippe’s passion is rekindled as well. But then family tragedy strikes, and, upon their return to California, a secret from Philippe’s past threatens to derail their hard-won happiness in one stroke.

Sara gains an ally when Marie Chevreau, her dear friend, arrives in San Francisco as the first female surgery student to be admitted to prestigious Cooper Medical College. Through Marie, Sara gets a glimpse of the glittering world of San Francisco’s high society, and she also forges friendships with local women’s rights advocates, inciting new tensions in her marriage. Philippe issues Sara an ultimatum: will she abandon the struggle for freedom to protect her family’s winemaking business, or will she ignore Philippe and campaign for a woman’s right to vote and earn a fair wage?

Fate has other plans in store in the spring of 1906, which brings with it a challenge unlike any other that the Lemieux family or their fellow Northern Californians have ever faced. Will the shadow of history overwhelm Sara and Philippe’s future, despite their love for each other? In The California Wife, Kristen Harnisch delivers a rich, romantic tale of wine, love, new beginnings, and a family’s determination to fight for what really matters―sure to captivate fans of The Vintner’s Daughter and new readers alike.

Kristen Harnisch is chef, chauffeur, laundress, nurse, shrink, shopper, and maid servant to three young children and one terrific husband by day, and a novelist by night (or anytime in between when she can scribble down a flitting thought).
She loves vanilla skim lattes, dark chocolate, and inspirational stories.  The intention of her blog is to encourage every mom, regardless of age, to pursue her ‘creative path’ by sharing stories of moms who are doing it and by chronicling the joys and challenges of her own writing life.

The California Wife picks up where The Vintner’s Daughter leaves off with Sara and Philippe having to move forward in the aftermath of the destruction of Sara’s home and vineyard in France and the knowledge that Philippe’s brother was a monster. I don’t want to spoil the plot of the first book in service the review of the second so I’ll be circumspect. Sara and Philippe head to California to make a go of Philippe’s vineyard with his promise to her that they will send money to replant in France. But all is not going smoothly there either as the prohibition movement is growing and other vintners are jealous of Philippe’s success.

Philippe and Sara set about making things work and trying to start a family and old friends move from New York to pursue further studies and re-connect with them. All seems to be going well until a disaster strikes the vineyard and an indiscretion from Philippe’s past threatens his marriage. It will take everything they have to recover from the effects of both of these issues.

The book is an excellent follow up to to the first chapter and it further develops the characters introduced in The Vintner’s Daughter. I will admit that I didn’t feel that the characters grew much in this book. They seemed to behave exactly the same and at times almost childishly in response to things happening – particularly Phillipe. But it’s a small complaint in the overall scheme of things. I am hoping for another installment in the lives of these characters as I’d like to see how they handle prohibition – we all know it’s coming. It will surely add another level of pressure as will the coming of WWI to the property in France.

This is a very good read and it will stand alone but I do suggest you read The Vintner’s Daughter first as it will add to a fuller understanding of the story lines. You won’t be disappointed.

The Vintner’s Daughter by Kristin Harnisch