The Candidate by Paul Harris – Blog Tour and Book Review 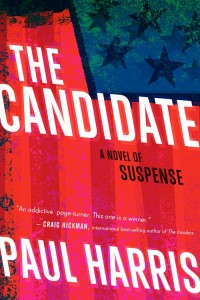 Paperback: 320 pages
Publisher: Vantage Point (July 1, 2012)
The novel begins with an assassination attempt. On a freezing winter’s night Jack Hodges, a little-known U.S. presidential candidate, speaks at a sparsely-attended town hall meeting in Iowa. It is a few weeks before the Iowa caucus, the first contest in the nomination process to be a candidate for President.
Hodges is a charismatic former general with a dedicated team of believers including campaign staffer Mike Sweeney. But the campaign is a disaster.  Ignored by the media, his candidacy barely registers in polls. Everyone assumes the established frontrunner, Virginia Governor Harriet Stanton, will easily win.
But that single night in Iowa transforms the race. A female assassin waits for Hodges to take the stage. As he speaks a shot rings out. She misses but the incident propels Hodges – who heroically shield his wife from the gunfire- on to the front pages. Yet no one knows the identity of the shooter. Police arrest a mysterious dark-haired woman but she refuses to say a single word. Her name, age, even her nationality, is a mystery.
Finally people pay attention to the Hodges campaign. Guided by his outspoken and outrageous campaign manager, Dee Babineaux, Hodges becomes a passionate, outsider rebel candidate pitted against Stanton, the lifetime career politician. Crowds now flock to his rallies inspired by his powerful message of hope and change.
But as Hodges’ campaign climbs in the polls, Babineaux realises it is vital to discover the identity of the mysterious woman who tried to kill him. She gives the task to Mike Sweeney, a true believer in Hodges’ cause. He must find out the woman’s name and history before anyone from Stanton’s campaign or the media does. As Sweeney uncovers more and more information, Hodges’ campaign, guided by the ruthless genius of Babineaux, goes from strength to strength. By the time Sweeney finds out the true identity of the would-be assassin, he faces a choice that could effectively determine who could be the next President of America.
Paul Harris, who has spent almost a decade covering American politics for The Observer and The Guardian, uses his own experience of reporting on the campaign trail to shine a light into the too-often murky world of American politics. His real world insights take the reader right into the heart of a fight for the White House.

PAUL HARRIS is a US Correspondent for The Observer, a British weekly that is the oldest Sunday newspaper in the world, and also its sister daily paper The Guardian. He has been based in the US for the past nine years covering all aspects of American political and cultural life from Hollywood stars to Washington politics. He is currently covering his third presidential election having previously reported on George W. Bush versus John Kerry in 2004 and John McCain versus Barack Obama in 2008. His experiences covering those races, especially the epic battle between Obama and Hillary Clinton for the 2008 Democratic nomination, were the inspiration for The Candidate.
Prior to his posting in the US, Harris was a journalist based in Britain and Africa. He has covered wars and conflicts in Iraq, Pakistan, Sudan, Somalia, Burundi, South Africa and Sierra Leone. His first novel, The Secret Keeper, was set in Sierra Leone against the backdrop of that country’s brutal civil war. He lives in New York (but fantasizes about living in France).

The book opens with an idealist aid to a man running for president. A man running for president who is far behind in the polls. It’s Iowa and it’s time to get the name out there. Mike Sweeney just knows deep down that Jack Hodges is the man that can be the president that America needs. One night at a school someone takes a shot at Hodges and suddenly he is all over the news and rising in the polls. But why did someone want to kill him?

Mike is sent out to find out and what he learns could turn the campaign upside down.

This was an entertaining, page turning suspense novel – if you tossed reality to the wind. In today’s 24 hour news world I doubt that the “big secret” at the core of the novel would have remained so. But barring that – the book reads fast and tense and the Mike is a very likable guy who finds himself in a very difficult place. The role of a minor blogger playing such a big piece of the puzzle was also a bit quirky but hey – one never knows these days with all of us bloggers around. The main characters (except for Hodges, who I guess is supposed to remain a bit of a chimera) are all well developed and defined. Some actions are despicable – but it’s politics, baby.

This would definitely make a great beach read or since we are leaving beach season, a great hot chocolate and fireside read.

You can purchase The Candidate on Amazon.com

Disclosure:  I received a copy of The Candidate from TLC Book Tours gratis. Any opinions expressed are my honest opinions and were not impacted by my receipt of the free book. I received no monetary compensation for this post.