I very much enjoyed The Locksmith’s Daughter by Karen Brooks so when TLC Book Tours offered me her latest book, The Chocolate Maker’s Wife I said yes very quickly. I thank them for sending me a copy at no charge for my honest review. 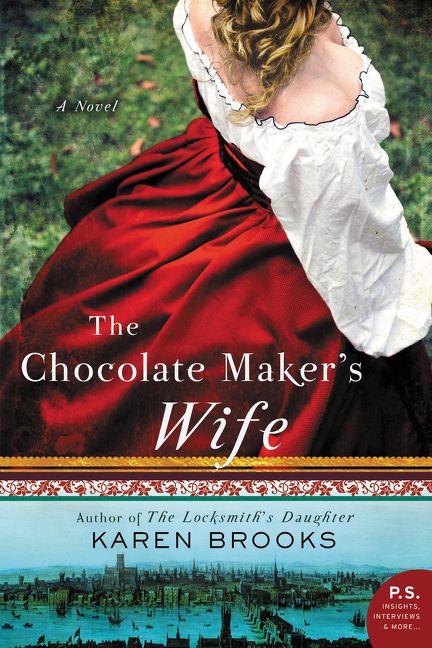 About The Chocolate Maker’s Wife:

Australian bestselling novelist Karen Brooks rewrites women back into history with this breathtaking novel set in 17th century London—a lush, fascinating story of the beautiful woman who is drawn into a world of riches, power, intrigue…and chocolate.

Damnation has never been so sweet…

Rosamund Tomkins, the illegitimate daughter of a nobleman, spends most of her young life in drudgery at a country inn. To her, the Restoration under Charles II, is but a distant threat as she works under the watchful eye of her brutal, abusive stepfather . . . until the day she is nearly run over by the coach of Sir Everard Blithman.

Sir Everard, a canny merchant, offers Rosamund an “opportunity like no other,” allowing her to escape into a very different life, becoming the linchpin that will drive the success of his fledgling business: a luxurious London chocolate house where wealthy and well-connected men come to see and be seen, to gossip and plot, while indulging in the sweet and heady drink.

Rosamund adapts and thrives in her new surroundings, quickly becoming the most talked-about woman in society, desired and respected in equal measure.

But Sir Everard’s plans for Rosamund and the chocolate house involve family secrets that span the Atlantic Ocean, and which have already brought death and dishonor to the Blithman name. Rosamund knows nothing of the mortal peril that comes with her new title, nor of the forces spinning a web of conspiracy buried in the past, until she meets a man whose return tightens their grip upon her, threatening to destroy everything she loves and damn her to a dire fate.

As she fights for her life and those she loves through the ravages of the Plague and London’s Great Fire, Rosamund’s breathtaking tale is one marked by cruelty and revenge; passion and redemption—and the sinfully sweet temptation of chocolate.

You can purchase The Chocolate Maker’s Wife at Harper Collins

Karen Brooks is the author of twelve books, an academic of more than twenty years’ experience, a newspaper columnist and social commentator, and has appeared regularly on national TV and radio. Before turning to academia, she was an army officer for five years, and prior to that dabbled in acting.

She lives in Hobart, Tasmania, in a beautiful stone house with its own marvelous history. When she’s not writing, she’s helping her husband Stephen in his brewery, Captain Bligh’s Ale and Cider, or cooking for family and friends, travelling, cuddling and walking her dogs, stroking her cats, or curled up with a great book and dreaming of more stories.

Rosamund lives with her mother, stepfather and stepbrothers at an inn where she is severely mistreated. One day as she is trying to escape her stepbrothers she encounters Sir Everard Blithman when his coach almost runs over her. He is struck by her close likeness to his first wife and in this he sees an opportunity. One that he does not explain to Rosamund. But he does offer to take her away from her miserable life. Her mother insists that he marry her before she will let her go – he agrees and a quick ceremony is performed and suddenly Rosamund is Lady Rosamund and heading off to a new life.

What she finds when she gets to her new home is far more complicated than she expected. Her husband does not treat her as a husband should, but rather as a pet or a project. He keeps her hidden for as he says, he wants to keep her a surprise until  he can formerly introduce her. He tells her of certain people he feels are his enemies and she is to all cost avoid them. Other than that she is free to go about her business. He also introduces her to his business – a new chocolate house. For he is introducing this magical drink to the people of England. Rosamund starts to learn all she can about chocolate and soon becomes a master of the drink.

As her husband’s plans move forward Rosamund starts to learn more about him and his family. Soon she finds out that all is not as it seems and that she might have traded one bad situation for another. But before she can sort out all of his machinations London is dealing with the plague and the Great Fire.

The Chocolate Maker’s Wife is a well written and compelling tale of the lengths someone will go for revenge. There are a myriad of subplots that all weave together to form a tapestry of life in Restoration England. A little tidbit from the early part of the tale is important later in the story. Ms. Brooks is rather brilliant at bringing all of the pieces together into such a page turning tale. I rather liked learning about the introduction of chocolate to society. I had a cup of this kind of chocolate in Italy and it is a far cry from what we know as “hot chocolate” here. I’m sure the taste was mind blowing when it was first introduced to the masses.

If you are looking for a book rich in character and history with some romance, betrayal, hope and yes chocolate this will satisfy you on many levels.