The Christmas Eve Daughter by Elyse Douglas – Blog Tour, Excerpt and Book Review with a Giveaway

I enjoy time travel novels. This is my second book by the husband and wife team who use the pen name Elyse Douglas. I read The Lost Mata Hari Ring (read my review) earlier this year. I enjoyed that book so when I was offered The Christmas Eve Daughter at no charge by Virtual Author Book Tours at no charge for my honest review I was thrilled to accept.

I am happy to welcome Elyse Douglas to day with an excerpt from The Christmas Eve Daughter. Enjoy the sneak peak, then please read my review and then you can enter to win a copy for yourself – US readers please.

Eve’s eyes popped open, breath coming fast. Her head was spinning, body pulsing, and the
high, shrill ringing in her ears sounded like the overtones of a violin.
For a time, she was paralyzed, unable to move a limb. Was Patrick there beside her? Her
eyes shifted from right to left. No, Patrick was not there. Her purse was not there. Patrick…
where was Patrick?

She fought panic. Minutes later, to her relief, the feeling in her legs and arms began to return.
Her neck, though stiff, swiveled slowly left and then right as she sought to confirm that Patrick
was not seated next to her. Her heart kicked at her chest.
She recognized the feelings. She’d experienced the same dizzy, disoriented sensations the last
time she’d arrived in 1885. As her surroundings slowly took shape, she saw bare trees, heavy
clouds, and vague pointillistic images passing; it was as if she were peering through a beaded-up
window pane. She blinked, shut her eyes for a moment, reopened them and focused. Something
was wrong. Her throat tightened. The world gradually took on definite moving shapes, and she
noticed that the passing people gazed back at her strangely.
An attractive woman in her early 20s drifted by, dressed in a sailor-style jacket and an ankle-
length narrow skirt with a slightly raised waistline. She wore buttoned-up black and tan two-
tone boots, and carried herself in an airy, stately manner, looking at Eve as if she were something
to be avoided.

Two other women soon passed, wearing long, narrow skirts that impeded their stride. Eve
had seen these skirts in old photographs on Pinterest. They were called hobble skirts because
they forced women to walk with small steps.

Eve shifted her weight, still too disoriented to stand. Another woman approached, wearing a
narrow skirt, a jacket with slightly sloping shoulders and a very attractive dark green velvet hat.
She was joined by several other women, all dressed similarly, all wearing hats with feathers,
bows, flowers or lace. Most of the hats had high crowns and small brims. Some of the hats were
simple, some elegant. All the women wore gloves, mostly white, but a few were brown or green.
Eve instantly knew she had time traveled, from the way people were dressed, the way they
held themselves, and how they walked. Modern women had a more carefree walk, their posture
was more relaxed, their dress more casual. Fashion in the past was all about status and wealth.
Okay, so she knew she had time traveled, but to what past?

Eve sat still, as if the wrong move would be fatal. Her body was sore and bruised, her mind a
mass of scrambled thoughts. Men strolled by wearing dark suits, ties and a variety of crown
hats, some a rich shade of dark brown, others a subdued green. They puffed on cigars; they had
bushy mustaches and trimmed beards.

No, this was not 1885 fashion. Her dress, coat and shoes were all wrong. She stood out. She
was blatantly conspicuous. No wonder people were staring at her.
Straining her tight muscles, she turned left and right, again searching for Patrick. He wasn’t
there. How could that be? They had left 2018 at the same time and from the same place. What
had gone wrong? She was completely alone and, of course, the lantern was nowhere to be found.

Her heart sank. Where had the lantern dropped her this time? And where had it sent Patrick?
Her worst fears had been realized. She was marooned in some past time without Patrick, and
without any way to get back to her time. No doubt he was in some other time, perhaps sitting on
the same bench thinking the same thoughts.
With great effort, she shoved her fears aside and struggled to rise to her feet. She pushed up
and managed to stand, but her legs were wobbly. Her lips felt glued together.

A young woman in her middle twenties glided by, her posture and poise “finishing school”
perfect. She offered Eve an aloof passing glance. But then something stopped her in mid-stride,
and she glanced back with a look of mild interest. Her lovely dark eyes expanded on Eve, the
aloof expression slowly melting into curiosity. The woman turned about, taking hesitant steps
toward Eve, being sure not to get too close, in case Eve was some demented thing.
Eve stood precariously, her aching muscles complaining. She had to work hard to stand up
without bobbing and weaving like a drunken woman, although in fact, she did feel a little high
and fuzzy, as if she’d drunk a vodka martini.

The woman ventured over a little closer. She was well dressed in a blue and gold three-piece
skirt, closed at the side, with a smart matching tunic jacket. She wore a brightly colored turban
over mounds of thick black hair, with a single feather and a brooch clasped to one side. She had
a small, pretty face with peaches-and-cream complexion. The luminous color of her cheeks
added a look of vitality; her button of a mouth seemed prim, and her glowing hazel eyes twinkled
with intelligence. In the weak sunlight, her eyes seemed to change from brown to green.
“I hope you’ll pardon me,” the young woman said, in a breathy soprano, with a slightly
affected accent that Eve couldn’t place. “You appear rather troubled and pallid. Are you quite
all right? ” 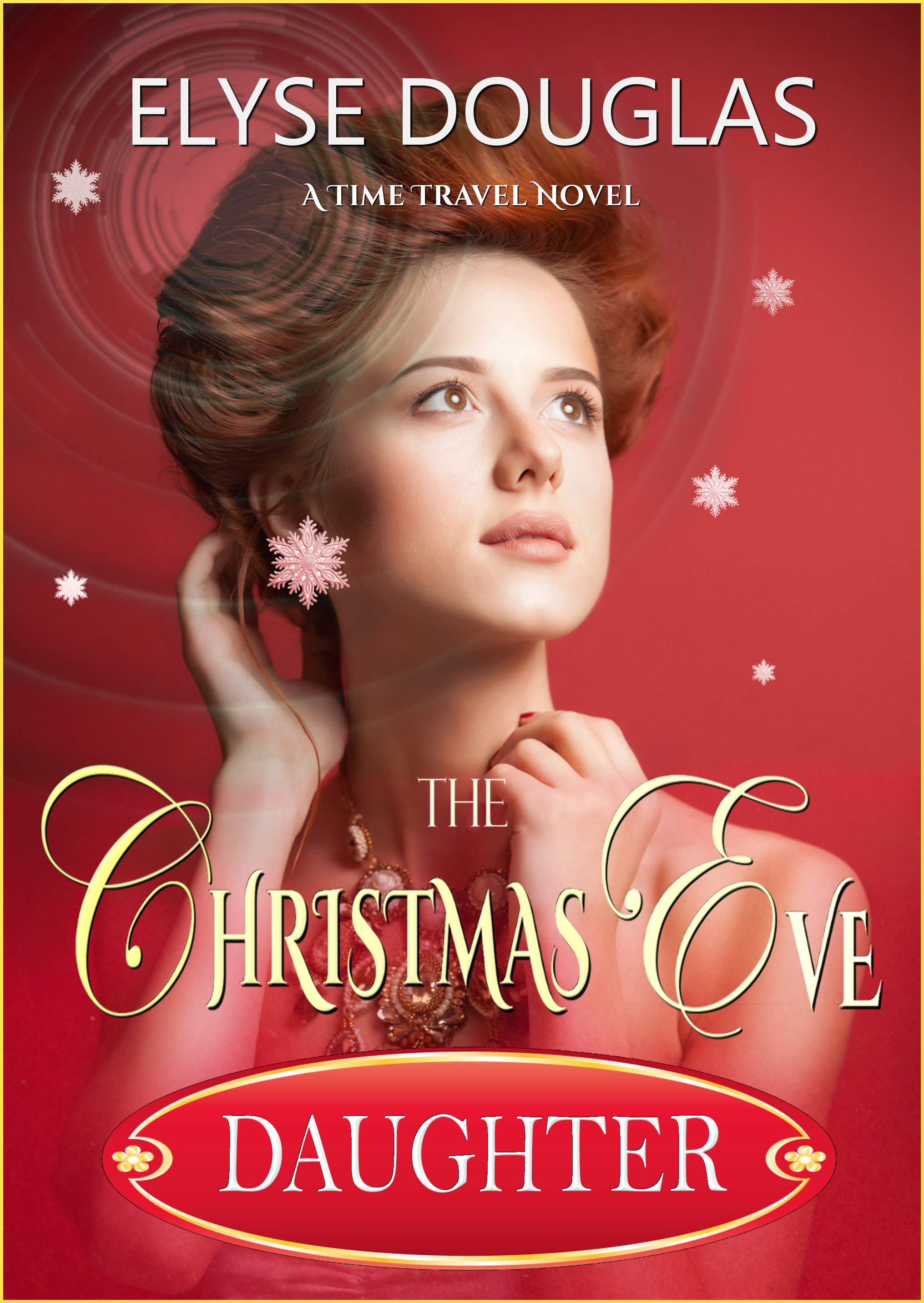 About The Christmas Eve Daughter:

The sequel to The Christmas Eve Letter!

When husband and wife, Eve and Patrick Gantly, discover a shocking secret from Patrick’s past, they make the difficult decision to use the old lantern once again to return to 1885. They hope to save his child from a tragic future.

Although they try to plan for every possible contingency, something goes wrong.  They lose each other and end up in a different time!  Nothing goes as planned.  They struggle to save Patrick’s daughter from certain death, even as they search for the lost lantern that will return them to their own time.

Elyse Douglas is the pen name for the husband and wife writing team of Elyse Parmentier and Douglas Pennington. Elyse began writing poems and short stories at an early age and graduated with a degree in English Literature. Douglas began writing novels in college, while studying music at the Cincinnati College Conservatory of Music.  He traveled the world as a professional pianist for many years.  He has also worked as a copywriter and corporate manager.

Whenever you pick up a time travel novel you automatically have to suspend belief ’cause, time travel. That doesn’t mean that everything real has to go out the window. You still need believable characters and the rest of the plot has to read true. You want to be invested in the characters and what is going on around them.

I did not read the story that preceded this, The Christmas Eve Letter. I don’t think it’s going to be a problem though, any bits that need explanation are smoothly written into the tale. The reader easily learns how and why Eve is able to time travel and how she met her 19th century husband Patrick, and brought him back to the present.

In this tale Patrick has been researching his family – after slowly adjusting to 21st century life. He discovers that he had a daughter back in his time that he knew nothing about. He also learns that she dies by murder. The thought of this invades his consciousness and does not let him rest. He needs to go back in time and warn her. Eve warns that changing time can be a very dangerous thing but he is insistent. So back in time they go – only to be separated. Will they find their way back to each other?

This was a highly engaging read that kept me happily distracted for a long drive. The authors have that knack of drawing you into their world so as a reader you feel fully immersed. The characters are fully realized and are not all just iterations of the same type. The worlds – both past and present  – are alive and as you read you feel like you’re inhabiting them with the characters.

I thoroughly enjoyed traveling through time with Eve and Patrick as they try to a.) save Patrick’s daughter from her murderer b.) try to reconnect and c.) try to get back to the present. There are a lot of twists and turns as this couple out of time tries to tread lightly upon the past so as to not upend the future. 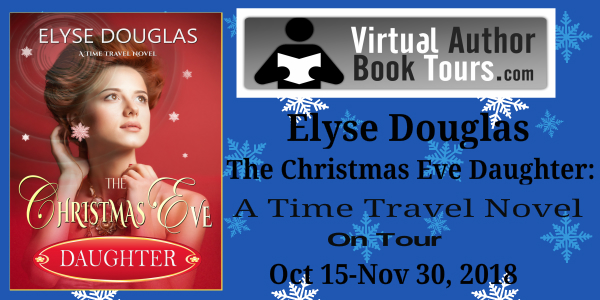 One lucky US reader will win their choice of a paperback or electronic copy of The Christmas Eve Daughter. Just enter as many ways as you would like on the Gleam widget below. Full rules are on the widget. Good luck everyone!