While I do not espouse a religion I do love Christmas.
The lights, the joy, the happiness. 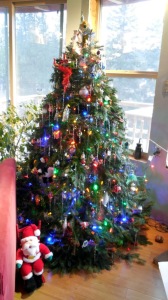 I enjoy putting my tree up every year. It’s a walk through the places we’ve been.
Many of the ornaments were bought on vacations.
Many of them were gifts from special people in my life so every year when I pull them out I stop and remember.
Every year I buy myself a new ornament – well two; I’m collecting the Hallmark cats. 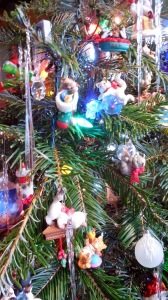 I’ve been doing so since they came out. It’s the only thing I really collect – unless you count books.
I have all fifteen of them. They are not all in the photo but you can see quite a few of them. The hubby shakes his head but he also drives me to the mall each and every year so I can buy my cat. 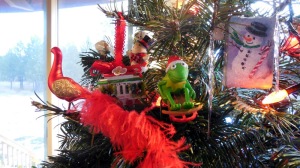 Before we retired we would go on vacations – together. What a concept. I started buying an ornament on the first trip we took after our honeymoon. I don’t know why I didn’t think of picking one up on that milestone trip. So the oldest ornament on the tree is a little cable car from San Francisco. We went for a weekend getaway about a month after we were married so I have been hanging that little reminder since 1982. The Kermit was gift from my mother – she knew how much I loved Kermit the frog. The red peacock was is one of the hubby’s picks. He loves the old glass ornaments. I have to be sure to place it somewhere the cats can’t get to it. They love that long, feathery tail. 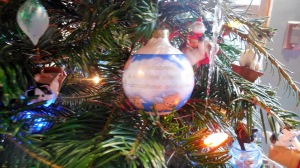 My girlfriend named me godmother to her firstborn and they gifted me this ornament for her first Christmas. I know it’s hard to read but it holds a place of honor every year and has for 18 years now. I can’t believe my little baby is now in college. 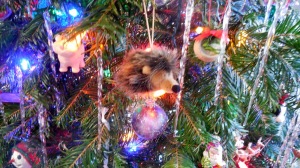 After my surgeries the hubby surprised me with a trip to Italy. It was divine. We saw these hedgehogs everywhere. We had no clue as to their meaning but I bought one because they made us laugh and it reminds us of the wonderful time we had. The little fish in the cat food bowl was another gift from my mother. 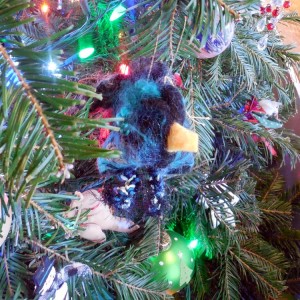 Last year a friend of mine was making felted chicken ornaments and they were so very cute I bought three. These I also have to place carefully as they have dangly legs and attract the cats. This is the smallest of the three. Her shop is on holiday hiatus right now but will be open again after the 28th. (Scotia Spinner) 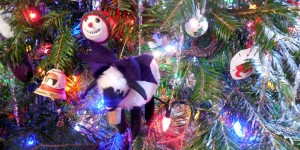 This cute little lamb was made by Judy Elizabeth’s Flock. She makes them in various sizes and this is my third. They have such adorable personalities. The little snowman head was made by another etsy friend but she is no longer doing papier mache. The bell off to the left is from Cherokee, North Carolina and the sandollar is from Maryland.

This year’s purchase was a special one. I learned of a woman who raises money for her rescue organization by painting pets on ornaments. 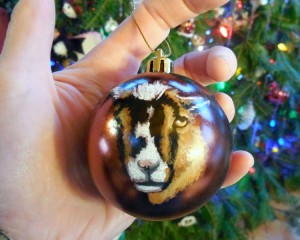 So what else but a Pricilla ornament?! I think she did a great job. 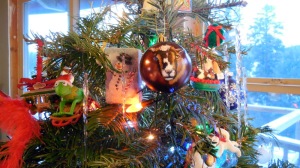 It has a place of honor on the front of the tree, up top so I can see it every time I look.
It will join the rest of my memories and make me smile every year when it comes out of the ornament box.

Merry Christmas to all who celebrate.
I’ll be back on Thursday with more posts.

SweetWorks Brings the Celebration to the Holidays with Giveaway #SweetWorksHolidays

This is a Fashionista Event and a promotional item was provided to me by Sweetworks. Hosts for this event are Still Blonde after all these Years and ModlyChic I’m not gonna lie. I loves me some candy. But you all know this already. Just like you all know […] 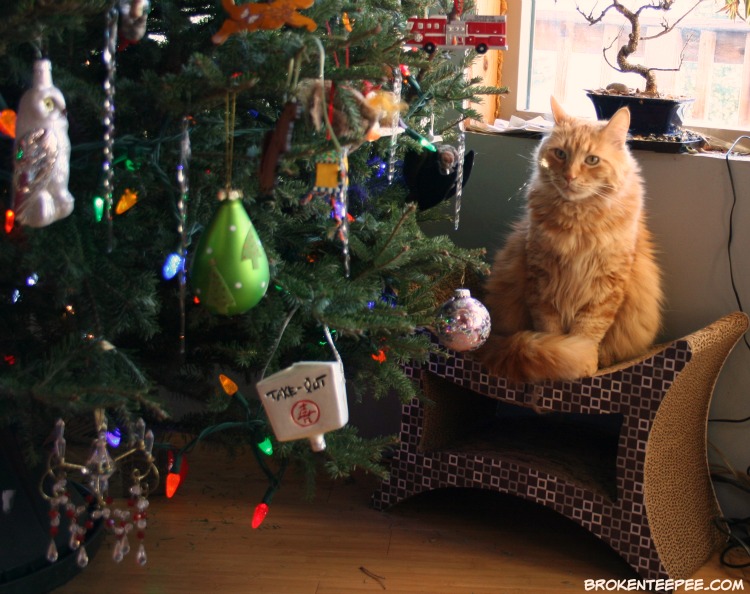 Christmas Memories and My Christmas Tree 2015

I really enjoy putting up my Christmas tree. This year’s tree is the 35th that I’ve shared with my husband. I have ornaments reaching back that far. They’ve survived two moves, traveling around the country in the fifthwheel and then the move into the yurt. […] 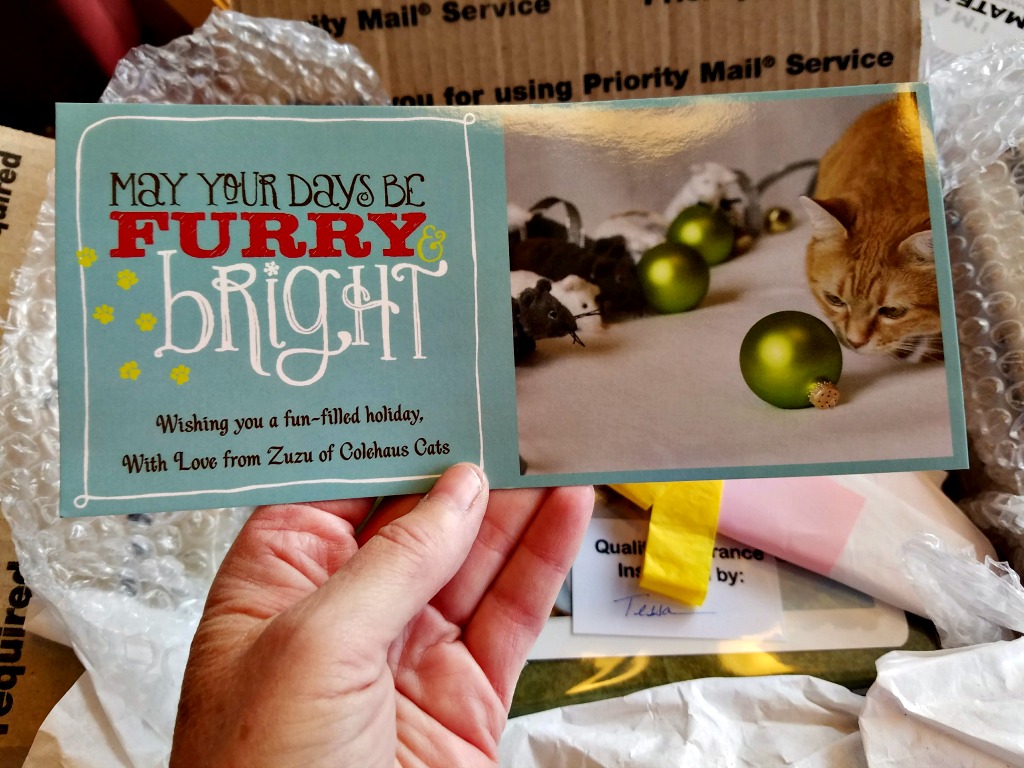 Every year the cat blogging world comes together to celebrate the holiday season with a very fun gift exchange called Secret Paws. The Farm cats look forward to it every year for they both like to give and to receive. This year they sent their […]