One of my favorite books of 2017 is now out in paperback. I reviewed The Confessions of Young Nero by Margaret George just around this time last year. The second book, The Splendor Before the Dark will be released in the fall and I cannot wait. Ms. George is one of my favorite authors – I have read all of her books and loved them. Some I have read more than once! To remind you about Nero: 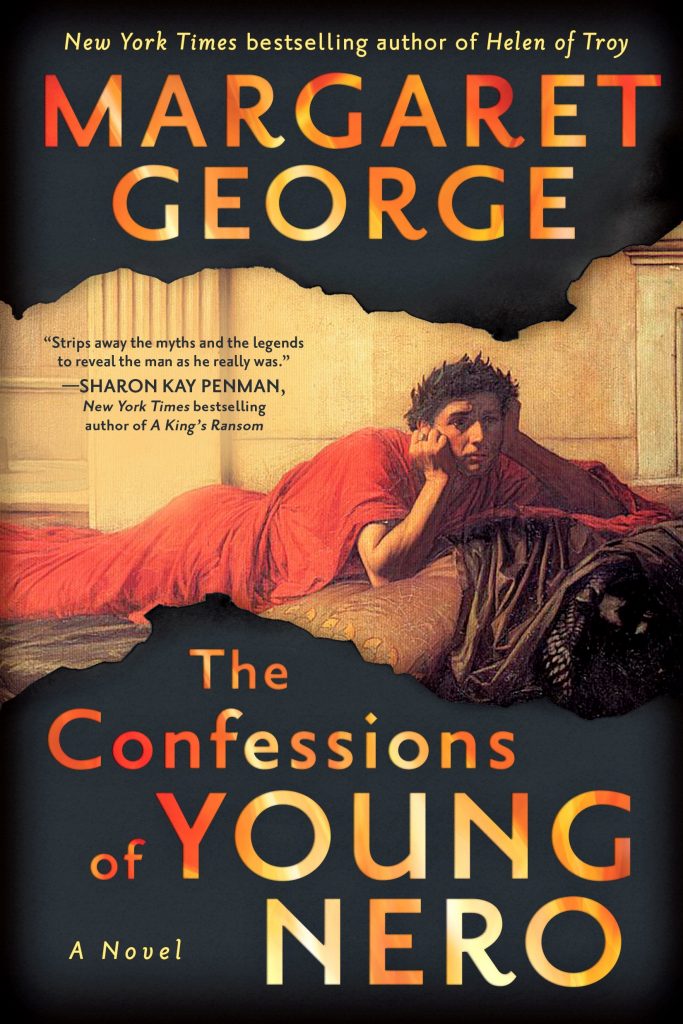 About The Confessions of Young Nero:

Behind each Roman Emperor’s climb to power lie the grand ambitions and chilling machinations of those closest to him. And none match the spectacularly theatrical and fraught sequences that carried a sixteen-year-old boy from the periphery of the royal family directly into the palace and then placed him on its throne.

New York Times bestselling author Margaret George has brought history to vivid life with her critically-acclaimed biographical novels of historical figures including Helen of Troy, Mary Magdalene, Cleopatra, Mary Queen of Scots, and Henry VIII. Now, she casts her eye to the last member of Julius Caesar’s dynasty, to remold and humanize the boy of whom history has made a caricature. Emperor Nero, who ascended to Rome’s ultimate seat of power at sixteen, is enshrined in popular memory as a hedonist, a tyrant, and cunning executioner. But the truth behind the caricature reveals a boy, an artist, an athlete, and a ruler who was both a product of his time and his mother Agrippina’s relentless ambition.

THE CONFESSIONS OF YOUNG NERO (Berkley Paperback Reprint; March 20, 2018; $18) is written, like Robert Graves’s I, Claudius, in the form of an autobiography. It reveals with luminescent detail Nero’s complex talents and successes, his childhood, his rise to power, and his instinct for self-preservation which first took root on the moonlit night his insane uncle, the Emperor Caligula, tried to drown him.

When he is just a small child, Nero’s mother, Agrippina, is released from exile by her elderly uncle—the newly crowned Emperor Claudius. Agrippina quickly plucks Nero from his modest upbringing, and embarks on a ruthless pruning of the family tree to ensure what she believes is her son’s rightful place in the Palace. Her naked ambition, cunning, and well-placed doses of poison help the obstacles fall one by one, until a teenage boy is given control of an Empire. Both tempted and terrified to assume his reign, Nero’s indoctrination into the incest, violence, luxury, and intrigue that have gripped Rome’s seat of power for generations will shape him into the man he was fated to become.

George covers the unfolding of Nero’s life and legacy, including his forced marriage to his cousin Octavia at fifteen; his passion for a beautiful ex-slave and other love affairs; the influence of the great philosopher Seneca on his reign; and his attentiveness to his political duties, including the improvement of Rome’s courts and public amenities. George uses Nero’s expansion of theatres, athletic games, chariot races, and musical performances as a window into the powerful artistic and athletic impulses that governed him, and which made him a champion of the common man—the men among whom he’d begun his life as “Lucius,” until fate made him forever “Nero.”

Like Mary Beard’s revisionist history of ancient Rome, SPQR, NERO both challenges our assumptions of that time period and taps into readers’ fascination with the Empire. Readers of Philippa Gregory will adore and find much to discover in George’s latest novel.

The author will continue Nero’s story in a second book this fall, THE SPLENDOR BEFORE THE DARK, which picks up during the ill-fated, final four years of his young life, as he faces his biggest test and challenge: the Great Fire of Rome.

Margaret George is the New York Times bestselling author of six novels of biographical historical fiction, including Elizabeth I, Helen of Troy, Mary, Called Magdalene, The Memoirs of Cleopatra, The Autobiography of Henry VIII, and Mary Queen of Scotland and the Isles. She also has written a children’s book, Lucille Lost.

One lucky US reader will win a paperback of The Confessions of Young Nero by Margaret George. Just enter as many ways as you would like on the Gleam widget below. Full rules are on the widget. Good luck everyone.
Nero

I have read ALL of Ms. George’s novels and enjoyed them immensely. I’ve put the preorder listing for the next book in the Nero series here if you are interesting in making sure you get your copy as it is available

Yum
Share
Email
What if a Princess Needed a TrustedHousesitter?
Apricot Couronne – a Showstopping Breakfast Treat