I received a free copy of The Courier of Caswell Hall from Litfuse Publicity Group for my honest review. I received no compensation for this post. 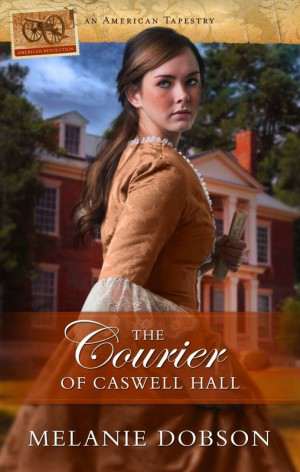 
As the British and Continental armies wage war in 1781, the daughter of a wealthy Virginia plantation owner feels conflict raging in her own heart. Lydia Caswell comes from a family of staunch Loyalists, but she cares only about peace. Her friend Sarah Hammond, however, longs to join the fight. Both women’s families have already been divided by a costly war that sets father against son and neighbor against neighbor; a war that makes it impossible to guess who can be trusted.

One snowy night Lydia discovers a wounded man on the riverbank near Caswell Hall, and her decision to save him will change her life. Nathan introduces her to a secret network of spies, couriers, disguises, and coded messages—a network that may be the Patriots’ only hope for winning the war. When British officers take over Caswell Hall and wreak havoc on neighboring plantations, Lydia will have to choose between loyalty and freedom; between her family’s protection and her own heart’s desires.

As both armies gather near Williamsburg for a pivotal battle, both Lydia and Sarah must decide how high a price they are willing to pay to help the men they love.


Melanie Dobson is the author of twelve novels; her writing has received numerous accolades including two Carol Awards.
Melanie worked in public relations for fifteen years before she began writing fiction full-time.
Born and raised in the Midwest, she now resides with her husband and two daughters in Oregon.
Learn more about Melanie at: http://melaniedobson.com

This was an enjoyable read about the stresses and strains placed on families and friendships during war. In this case it’s the Revolutionary War that threatens to tear things apart for Lydia Casswell. She is a daughter of privilege and the child of a staunch supporter of the British Crown. While not as ardent as her father, Lydia also leans towards England in the battle until she finds a man half frozen by the river on her property. He brings her around to the other side and she soon joins her friend in spying for the nascent United States.

The book is well researched and brings out the fear that underlies any spying mission. These girls weren’t trained. They weren’t anything other than society girls yet they put it on the line for a cause. The characters are well developed and the romance takes a back seat to the history which makes it an interesting read. It was a tumultuous time in this country’s history and I’m sure many families were torn apart with different feeling towards how it would all come to play. Ms. Dobson expresses that very, very well.

You can purchase The Courier of Caswell Hall on Amazon.com

Disclosure:  I received a free copy of The Courier of Caswell Hall from Litfuse Publicity Group for my honest review. I received no compensation for this post.