I received a free copy for my honest review. Any book links are affiliate links. 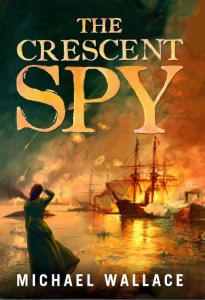 Writing under a man’s name, Josephine Breaux is the finest reporter at Washington’s Morning Clarion. Using her wit and charm, she never fails to get the scoop on the latest Union and Confederate activities. But when a rival paper reveals her true identity, accusations of treason fly. Despite her claims of loyalty to the Union, she is arrested as a spy and traitor.

To Josephine’s surprise, she’s whisked away to the White House, where she learns that President Lincoln himself wishes to use her cunning and skill for a secret mission in New Orleans that could hasten the end of the war. For Josephine, though, this mission threatens to open old wounds and expose dangerous secrets. In the middle of the most violent conflict the country has ever seen, can one woman overcome the treacherous secrets of her past in order to secure her nation’s future?

Michael Wallace was born in California and raised in a small religious community in Utah, eventually heading east to live in Rhode Island and Vermont. In addition to working as a literary agent and innkeeper, he has been a software engineer for a Department of Defense contractor programming simulators for nuclear submarines. He is the author of more than twenty novels, including the Wall Street Journal bestselling Righteous series, set in a polygamist enclave in the desert.

This has been a year full of books on women spies during the Civil War. I think this might have been my fourth or fifth book I’ve read since January. It does seem that books run in cycles. The Crescent Spy takes a different approach in that the heroine is a newspaper reporter. Highly unusual for a female during this time period.  Josephine Breaux was happily working at a Washington newspaper coming in with scoops from both sides of the War. She is, however writing as Joseph Breaux – until she is outed by a rival paper. This creates a series of problems – she loses her job, she is picked up by some officers and she thinks she is being hauled off to jail. But she is really being tested and that test lands her at the White House talking to President Lincoln. From there her life changes completely as she finds herself part of Pinkerton’s league of spies. She is sent to New Orleans as she knows the area – her job is to provide information about anything she can about fortifications, preparations, etc.

Josephine gets settled in New Orleans and very quickly gets hired and sent on her first assignment out to a fort. From there she settles into her dual life while also dealing with some family issues. She is a rather worldly, very wise young woman at 21 and she says her maturity and knowledge comes from extensive reading. It’s a lot to accept but she does have a complicated back story I’m not going to get into in a review here. She just comes off as a much older character.

You can tell from reading that Mr. Wallace did his research into the battle for New Orleans – there is a fair bit of detail at least in regards to the big river fight. Not much in the way of blood and gore, but much in the way of booms, bombs and ship movement. These passages have the reader right in the midst of the battle and it’s not a comfortable place to be.

Overall I did enjoy the book. The story was an interesting way to present the battle for New Orleans. It seems like the ending left an opening for another book which would be interesting. Josephine was just hinting at a romance and she was learning more about her past. A second book would further these stories rather than leaving all of those questions hanging in the air as they are now.

One lucky reader (US/Can) will win a copy of The Crescent Spy. Just enter as many ways as you would like on the Gleam widget below. Full rules are on the widget. Good luck everyone.