I received a free copy of The Dancing Master from TLC Book Tours for my honest review. 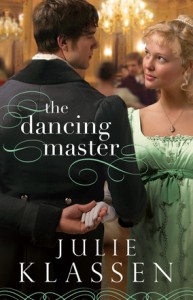 
Paperback: 432 pages
Publisher: Bethany House Publishers (January 7, 2014)
Finding himself the man of the family, London dancing master Alec Valcourt moves his mother and sister to remote Devonshire, hoping to start over. But he is stunned to learn the village matriarch has prohibited all dancing, for reasons buried deep in her past.
Alec finds an unlikely ally in the matriarch’s daughter. Though he’s initially wary of Julia Midwinter’s reckless flirtation, he comes to realize her bold exterior disguises a vulnerable soul–and hidden sorrows of her own.
Julia is quickly attracted to the handsome dancing master–a man her mother would never approve of–but she cannot imagine why Mr. Valcourt would leave London, or why he evades questions about his past. With Alec’s help, can Julia uncover old secrets and restore life to her somber village…and to her mother’s tattered heart?
Learn more about The Dancing Master HERE.


Julie Klassen loves all things Jane–Jane Eyre and Jane Austen. A graduate of the University of Illinois, Julie worked in publishing for sixteen years and now writes full time. She has won the Christy Award: Historical Romance for The Silent Governess (2010) and The Girl in the Gatehouse (2011) which also won the 2010 Midwest Book Award for Genre Fiction. Julie and her husband have two sons and live in a suburb of St. Paul, Minnesota.
Connect with Julie:  Website —Facebook

The Dancing Master opens with a somber scene as Julia Midwinter and her mother remember the death of her brother on May Day. It was a traumatic event for Lady Midwinter and one she will not fully explain to Julia nor why dancing is forbidden in town or why Julia can’t leave to experience well, anything. Julia feels trapped as the future lady of the house and she doesn’t want to be bound to the responsibilities. She wants to LIVE.

Alec Valcourt has just moved to town and hopes to escape the scandal that drove him and his mother and sister from London to the safety of his Uncle’s home. He is a Dancing Master but now finds himself in a town that does not dance. However will he support the family?

Julia notices Alec from the start and she is a flirt of the first order. Her mother does NOT want her to get any ideas so she gives Alec a job which solves any number of problems; it keeps Alec from pursuing dancing, it keeps him at a lessor societal level and it keeps him under her nose so she can make sure he and Julia stay apart. So of course he and Julia do not stay apart….

So, how did I feel about this book? Eh. It had its moments. I was slightly annoyed by both main characters but also intrigued – they were both spoiled brats but they were also products of their time. The hidden stories in both families were compelling enough to make the book interesting and the ancillary characters added much needed balance. I’ve read several of Ms. Klassen’s books and will read her again but The Dancing Master will not prove to be a favorite. The inclusion of the dancing instructions from the period and the descriptions of the new – at least to me – Byranite religion added some fascinating history to the tale.

You can see The Dancing Master Tour Schedule

You can purchase The Dancing Master on Amazon.com

One lucky reader (US/Can) will win a copy of The Dancing Master. How do you win? It’s easy! Just hop on the Rafflecopter. Good luck everyone.

Disclosure:  I received a free copy of The Dancing Master from TLC Book Tours for my honest review. I received no compensation for this post.