The Death of a Falcon: A Muirteach MacPhee Mystery by Susan McDuffie – Blog Tour and Book Review

Sometimes I just want an escapist read. If it can be historical all the better. The Death of a Falcon by Susan McDuffie was a perfect afternoon’s respite from the world. I thank Historical Fiction Virtual Book Tours for sending me the book at no charge for my honest review. 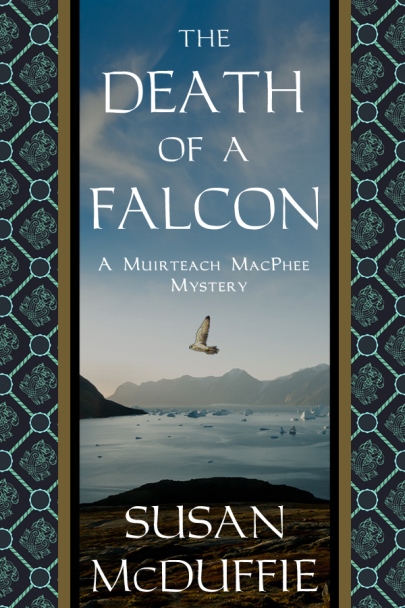 About The Death of a Falcon:

Scotland, 1375: Muirteach MacPhee and his wife Mariota visit Edinburgh Castle, assisting the Lord of the Isles in his negotiations with King Robert II. A trading vessel arrives at the nearby port of Leith from the far away Norse settlement in Greenland. The ship brings unexpected diversion and carries coveted wares: gyrfalcons, unicorn’s horns, and fine furs. Both King Robert and the Lord of the Isles desire the rare birds, easily worth a king’s ransom.

Muirteach and Mariota, unaccustomed to the sophistication of castle life, initially find pleasure in the heady and flirtatious glamor of the royal court. Then sudden and unexpected cruelty, followed by the senseless death of a beautiful young girl, plunge the couple into a murky sea of alliances and intrigue that stretches from Scotland across the icy western ocean to the far northern lands of the Norse, leaving trails of treachery and murder in its wake.

A fan of historical fiction since childhood, Susan McDuffie spent such vast amounts of time reading stories set in the past that she wondered if she had mistakenly been born in the wrong century. As an adult her discovery that Clorox was not marketed prior to 1922 reconciled her to life in this era. Susan’s childhood interest in Scotland was fueled by family stories of the McDuffie clan’s ancestral lands on Colonsay and their traditional role as “Keeper of the Records” for the Lords of the Isles. On her first visit to Scotland she hitchhiked her way through the Hebrides, and her initial visit to Colonsay and the Oronsay Priory ruins planted the seeds for her medieval mysteries. Those seeds have grown into the Muirteach MacPhee mysteries, set in medieval Scotland during the Celtic Lordship of the Isles. The series includes A MASS FOR THE DEAD, THE FAERIE HILLS (2011 New Mexico Book Awards “Best Historical Novel”), THE STUDY OF MURDER (New Mexico/Arizona Book Awards Finalist 2014), and THE DEATH OF A FALCON. Susan frequently presents at workshops and conferences and regularly reviews historical fiction books for the Historical Novel Society’s “Historical Novels Review.

Susan lives in New Mexico and shares her life with a Native American artist and four cosseted cats. She enjoys taking flamenco dance classes in her spare time. Susan loves to hear from readers and can be contacted via Facebook or through her website.

I did not know when I accepted this book for review that it was part of a series. It is, as a matter of fact the fourth book featuring Muirteach MacPhee and his intelligent wife, Mariota. I will note that I didn’t feel any loss for not having read the books that came before. Ms. McDuffie effortlessly included anything from the previous books that needed to be explained.

In this tale Muirteach and Mariota are at court with his master, the Lord of the Isles. A trading vessel arrives with furs and falcons. Two of the birds are a rare and striking pure white in color and are very rare and desirable. The owner of the boat has brought his daughter and foster son along – they are jugglers and tumblers so they can entertain the court. Soon He is selling his wares and people are enthralled with the birds. But one day one of the falcons is found dead without a wing and the other has a broken wing.

Who would do such a thing?

But it only gets worse as the trader’s daughter is soon found dead. Now the question is who would kill a sweet, innocent girl? As Muirteach has experience with investigations his master asks him to help the King’s man find who did the murder. Soon he off following the clues but he finds himself distracted by things that threaten his investigation and his marriage.

It is always hard to write that one enjoys a murder mystery – after all, someone dies. Often times, more than one someone dies. But these characters are wonderful; very human, quite flawed and yet despite those flaws still very much in love.

This was a bit of a circular mystery which was good. I will admit that it caught me by surprise a couple of times which is always a delight in a mystery novel. The final denouement was a titch convoluted and it stretched the imagination but it did lead to fast turning of pages.  I’ll happily go on another adventure with this pair again.