The Emissary by Tamara Veitch and Rene DeFazio – Book Review

I must apologize to authors. My review for The Emissary is late. I was to have it up on Monday but I’ve had a stretch of bad days and my reading fell behind. I am truly sorry. The book was sent to me at no charge for my honest review. 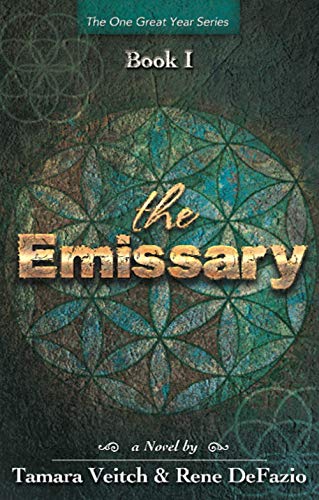 When the world collapses from a Golden Age into one of chaos and strife, mankind’s salvation lies in the hands of eternal Emissaries― guardians chosen to protect the secrets of a sacred, ancient civilization and to guide humanity back to enlightenment even as its darkest hour approaches.

A timeless tale of love reborn through the ages.

Marcus and Theron are two lovers bound by an eternal and unshakable bond. As a series of catastrophic events nearly destroys their world, the two along with a chosen few become Emissaries destined, over the course of 13,000 years and through many reincarnations, to lead humanity into an era of peace and prosperity as foretold by the Elders of their race. But the forces of evil have taken possession of one man, Helghul, who relentlessly pursues Marcus and Theron through time, determined to destroy them and ruin all hope for salvation. The Emissary tracks Marcus’s epic adventure across centuries of human civilization to present day, where envoys of darkness gather threatening to bury the life-giving secrets of Atitala forever.

Good and evil come to blows and the future of mankind hangs in the balance.

Rene DeFazio, who was born and raised in Canada, currently lives in the Vancouver area with his wife and writing partner, Tamara Veitch.  Rene is an actor and producer with numerous film and television roles to his credit, as well as countless commercials and print ads.  A world traveler and lifelong adventurer, Rene has called upon his unusual and exciting experiences in co-creating the One Great Year book series of which THE EMISSARY is the first installment.  His tireless research and first-hand knowledge of exotic locations, customs, sights, and smells help to bring this epic story to life.

Tamara Veitch is a writer, mural artist, and mother of three.  She grew up in Canada and attended Simon Fraser University, studying English and Psychology.  Tamara has had a life long interest in spiritual wisdom and has carefully researched ancient teachings from many traditions to ensure historical accuracy through the One Great Year book series.

The world is in a state of disarray and the only hope are the Emissaries; eternal guardians who have protected the secrets of our ancient civilization until a time where enlightenment can reign again. But there is a force that wants to stop them as they move through time.

Marcus and Theron are two of the chosen to preserve all that was Atitala. They are also lovers. As they tumble through time trying to find each other it’s not as easy as you might think to reconnect. Especially when one of the Emissaries is not working for good, but rather for evil. Helghul has been possessed for lack of a better word by the worst and he is striving to stop Marcus and Theron. Who will win this ultimate battle of good versus evil?

It took me a bit to get into this book. It was, at least at the start, one of those books that felt like it was smarter than me. But I didn’t let it win. Ultimately I figured out the players and what was going on and I triumphed! It was a wild read through time as these Emissaries tried to save society from itself. All of the questions have not been answered as there is at least another chapter so I will anxiously await it.