The Garden of Blue Roses by Michael Barsa is a real reading stretch for me. I tend to stay away from psychological reads as I’ve noted but this one sounded interesting to me. I thank TLC Book Tours for sending me a copy at no charge for my honest review. 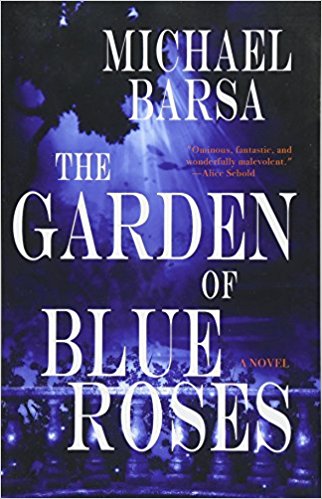 About The Garden of Blue Roses:

A car lies at the bottom of an icy ravine. Slumped over the steering wheel, dead, is the most critically acclaimed horror writer of his time. Was it an accident? His son Milo doesn’t care. For the first time in his life, he’s free. No more nightmarish readings, spooky animal rites, or moonlit visions of his father in the woods with a notebook and vampire make-up.

Or so he thinks.

Milo settles into a quiet routine–constructing model Greek warships and at last building a relationship with his sister Klara, who’s home after a failed marriage and brief career as an English teacher. Then Klara hires a gardener to breathe new life into their overgrown estate. There’s something odd about him–something eerily reminiscent of their father’s most violent villain. Or is Milo imagining things? He’s not sure. That all changes the day the gardener discovers something startling in the woods. Suddenly Milo is fighting for his life, forced to confront the power of fictional identity as he uncovers the shocking truth about his own dysfunctional family–and the supposed accident that claimed his parents’ lives.

Michael Barsa grew up in a German-speaking household in New Jersey and spoke no English until he went to school. So began an epic struggle to master the American “R” and a lifelong fascination with language. He’s lived on three continents and spent many summers in southern Germany and southern Vermont.

The Garden of Blue Roses is his first novel.

If I am to be completely honest, I think this book is smarter than me. This happens when I read literary fiction whether it be an historical novel or this, my first suspense/thriller book in that genre. I get the feeling with these books that things are happening over my head and I’m missing important points and at times that the characters are laughing at me for my lack of insights.

That being written I did read the book even if I didn’t always understand what was going on. It is very well written. There is a lot going on within the book and a fair amount to keep track of which makes for a bit of a brain stretch. The main characters are a pair of siblings whose father is a famous horror writer. They are both a touch….odd.  The family lived in a large, old house and kept pretty much to themselves. After the deaths the daughter starts on a big spruce up of the grounds, the garden in particular. Her brother is not pleased at all.

Then the weird begins.

I won’t get into the twists and turns of this intelligent and brain teasing novel. It is not a book you read with a lack of attention, you really have to stay in focus or you miss something that won’t become obvious until three chapters later. It’s a real kicker and it will stay with you for days after you read it. Quite possibly in your dreams…..

One lucky US reader will win a copy of The Garden of Blue Roses by Michael Barsa. Just enter as many ways as you would like on the Gleam widget below. Full rules are on the widget. Good luck everyone.