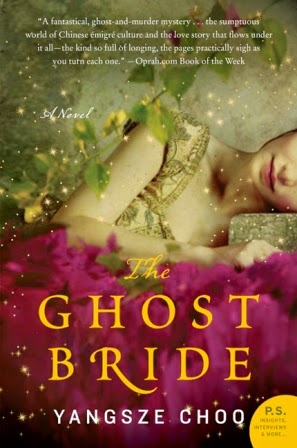 • Paperback: 384 pages
• Publisher: William Morrow Paperbacks; Reprint edition (August 5, 2014)
A wondrous coming-of-age story infused with Chinese folklore, romantic intrigue, adventure, and fascinating, dreamlike twists
Malaya, 1893 Li Lan, the daughter of a genteel but bankrupt Chinese family, has few prospects. But fate intervenes when she receives a proposal from the wealthy and powerful Lim family. They want her to become a ghost bride for the family’s only son, who died under mysterious circumstances. Rarely practiced, ghost marriages are often meant to placate a restless spirit. Such a union would guarantee Li Lan a comfortable home for the rest of her days, but at what cost?
As she reluctantly considers the offer, Li Lan is unwillingly drawn into the shadowy parallel world of the Chinese afterlife, with its ghost cities and vengeful spirits. There Li Lan must uncover the Lim family’s darkest secrets—and the truth about her own family—before she is trapped in this ghostly world forever.

Yangsze Choo is a fourth-generation Malaysian of Chinese descent. She lives in California with her husband and their two children, and loves to eat and read (often at the same time).
Connect with her on her website or on Facebook.

I remember when The Ghost Bride came out last year and I was very interested in reading it but it never crossed my review list. Now that it’s being released in paperback I finally had the opportunity to read it. The synopsis sounded so mysterious and intriguing and it turned out to be so much more than it promised. Li Lan is the daughter of a man who basically withdrew from life after his wife died from smallpox and he did not. His face shows the ravages of the disease and he spends his time reading poetry and smoking opium.  Li Lan is cared for by her Amah and while she is 18 years old her maturity level seems to be of a girl very much younger since she never leaves the house and has little interaction with other people.

Her father mentions a marriage proposal but it’s to be a Ghost Bride – a marriage to man who has died. This being a concept so far removed from anything I understand it took a while for me to wrap my head around the Chinese customs and stories of the afterlife. Once I sorted them out I found it to be a fascinating world.

I found myself lost in the story and the world created by Yangsze Choo. Li seemed very unprepared for life outside of her house since her father paid her and her future little mind. But she stumbled along and she grew stronger as she learned more about her family and the afterlife. She finds herself torn between a man in the physical world and a being in the afterlife and doesn’t know either one well enough to answer their demands on her life.

This was a book that kept my interest and taught me something about a different culture. It took me to several different worlds both real and fantastic. I don’t usually like books not grounded in reality but this one was very well written and it held my interest from beginning to end.

You can purchase The Ghost Bride on Amazon.com